Do you have a love rat story to sell? Email me here Sell my story >

This is how Lorraine Hilliard’s love rat story appeared in the Sunday People newspaper. 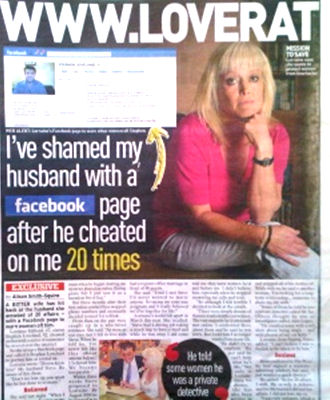 A BITTER wife has hit back at the husband she accused of 20 affairs with a Facebook page to warn women off him.

Lorraine Hilliard, 47, claims Stephen Loveland, 42, cheated on her with a series of mistresses he wooed over the internet.

So she set up a Facebook page and called it Stephen Loveland to portray him as a total rat. Lorraine wrote: Do you know him? My husband Steve. Be aware of this cheat. Dont let him rip you apart like he has done to so many.

She said last night: When I found out he was cheating on me with women he had met on the internet I decided to play him at his own game. I came up with the idea of making a special profile page for him on Facebook. He has devastated my life and I want to ensure no other women are taken in by his lies, as I was.

Lorraine, a professional carer, first met coach driver Steve in June 2008 on the internet. She recalled: I was a single mum when he began chatting me up as we played an online flirting game but I just saw it as a harmless bit of fun. But three months after their first online contact they swapped phone numbers and eventually decided to meet for a drink.

From then on the pair were caught up in a whirlwind romance. She said: As soon as our eyes met I fell in love with Steve. When he told me, Ive never felt like this about anyone before, I believed him. We became inseparable. Within three weeks Steve proposed to Lorraine. By August 2008 he had moved in to her three-bed semi. Lorraine, whose children Chris, 28, Lee, 17, and Beth, 16, are from two previous relationships, said: In hindsight I was foolish to rush into it. But Steve swept me off my feet.

He was great with the kids and they all adored him. Beth even called him Daddy Steve. I felt the luckiest woman alive.

In October 2008 the couple had a register office marriage in front of 40 guests. She said: Until I met Steve Id never wanted to marry anyone. So saying my vows was poignant and I really believed wed be together for life. Lorraines world fell apart in March this year. She recalled: Steve had a driving job taking a coach trip to Switzerland and while he was away I did some DIY. I was looking for some drill bits at the back of his wardrobe and I stumbled on a hidden photo of a strange woman and papers with names and addresses of two other women scribbled on it. There was also a password for an email account.

Hands shaking, Lorraine rang Steve. She recalled: At first he told me they were women he’d met before me. I didn’t believe him, especially when he stopped answering my calls and texts. So although I felt terrible I decided to look at the emails.

There were simply dozens of them to loads of different women. The vast majority he’d obviously met online. I confronted Steve about them and he said he was sorry. But I told him I no longer wanted him in my life. He didn’t try to explain. He just said he cant help what hes like. Not only is Lorraine filing for divorce, she has also been getting in touch with many of the women after Steve moved out.

She said: There are 20 of them at least. Maybe more. It has been heartbreaking. One woman, Toni, admitted that at the time when Steve told me he was in Cornwall he was with her in North Wales. Another told me she met Steve on a Friends United dating site. He told her he was single and stripped all of his clothes off. While with me he said to another woman, I’m looking for a long- term relationship… someone to share my life with.

Some of them he told he was a private detective called Mr Taz. Others thought he was an investigator called Alex Lopez.

He emailed some with a sob story about being single and with photos of our cat Kitty. Lorraine, from Epping, Essex, added: I cant believe I was so foolish to be taken in by him.

Steve confirmed to The People he had signed a statement admitting adultery but said: I just wanted a quick divorce.

He added: As for 20 affairs… I wish. My ex-wife is delirious and for the record I did not have affairs. I did not love my ex.

I was very unhappy, which is why I left. Lorraine pressurised me into the marriage and looking back I never loved her.

I left because I didn’t want to be married any longer. We had a sexless and loveless marriage. It was just a mistake. Yes, I did talk to women online but they were all old acquaintances and old friends. All this talk is nonsense. I never actually had one affair.