Sell your story about breast cancer to the media

Do you have a real life story to sell a about how cancer transformed your life? If you have a story about cancer to sell contact me here: Sell your story >

This is how Philippa Wakefield-Lilley’s story about breast cancer looked in the Daily Mirror. 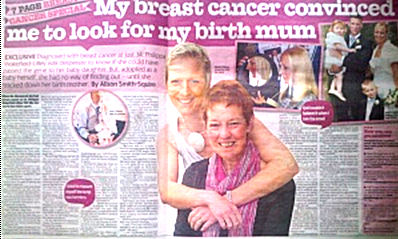 When she discovered she had breast cancer at 34, Philippa Wakefield-Lilley felt like her world had fallen apart. The disease was aggressive and had spread through her body. Now she was terrified her two-year-old daughter Ellie might have inherited a rogue breast cancer gene. But the mum-of-two had no way of finding out. Adopted as a child, she’d never known her birth mother and had no straightforward way of uncovering her medical history.

But a year on, things look very different. Not only has Philippa come through her gruelling treatment, but she has also managed to uncover a silver lining. As she battled to find out if her cancer was genetic for Ellie’s sake, she traced her birth mother, Linda Haynes, 56. As well as finding out there is no history of breast cancer in her family, the mum and daughter have been reunited.

“When I got breast cancer it was devastating,” says Philippa, who also has a five-year-old son, Jack. “I never imagined it would be a lifechanging journey. “If I hadn’t gotten cancer I never would have thought of tracing my biological parents.

“But meeting my birth mum Linda has completed my life. All the pieces of the jigsaw fell into place.” Linda, a primary school teacher who reluctantly gave Philippa up for adoption as an unmarried 21-year old, is equally emotional about finding her daughter.

“I had never forgotten the last time I saw Philippa,” says Linda. “Just four days after giving birth I dressed her for the final time in a little bonnet and white dress before handing her over. And from the day I gave her up I never stopped thinking about her. “Over the years, I’d searched for Philippa but I had always drawn a blank. To hear from her was amazing. When we met up it was as if we’d known one another for years.”

Philippa, now 35, found the lump in her right breast on September 20 last year. “The children were watching TV and I was pottering around tidying up when I knelt down to pick something up from the floor. That was when I felt it – a lump the size of a plum.”

She recalls immediately feeling a sense of dread. “I tried to reassure myself it was probably harmless,” she says, “but I remember slumping on the floor where the children couldn’t see me and quietly crying. “Even then I feared it could be cancer. I couldn’t help looking at my beautiful children and thinking ‘I might die’.”

The next day, Philippa saw her GP who referred her for tests. A doctor gave her bad news 10 days later. Her husband Rod, 35, a civil servant, was abroad on business when she heard. “Rather than wait for Rod, I just wanted to know the results,” she says. “However prepared I thought I was for bad news, when the surgeon said it was cancer my first question was ‘will I live?’

Thankfully the surgeon told me straight away that eight out of 10 women survive.” Two weeks later Philippa, a former intelligence analyst with the Royal Air Force, had a mastectomy and had five lymph nodes removed. But tests on the nodes revealed the cancer had spread.

“As my cancer is very aggressive, I had a 70% chance of it recurring in the next five years. “To stand any chance of being in the 30% of women where it doesn’t come back, I needed heavy doses of now very close to one another chemotherapy and radiotherapy. Although Rod and I had been together for eight years we’d never bothered to marry. “But then he asked me, ‘what are you doing on November 12?’ – he had booked our wedding day. Suddenly, it seemed the perfect time to marry.”

The couple had a poignant registry office wedding, attended by 11 family members.

“It was a very special day,” says Philippa. But with her treatment due to begin just 10 days later, there was no time for a honeymoon. Instead, she decided to prepare by shaving her head. She says: “My oncologist said I would definitely lose my hair so I decided to shave it all off for charity.”

Then she began her treatment. “It was very hard because it made me feel so sick and tired,” she admits, “but by June this year the treatment was finished.” Next, Philippa was offered genetic counselling. “The counsellor told me I was in the 2% of patients who are unusually young. “But genetic testing wouldn’t be possible without finding my birth parents. She suggested I find my biological family.

“Until then I hadn’t seriously considered it. “My adoptive parents, Pauline, 72, and Tony, 75, had given me a secure childhood so I’d never felt the need to go out and find my true parents. “And I worried what I might find if I did trace them. Perhaps they’d reject me. It seemed best to leave it. “But now, with the thought I could be carrying a gene for breast cancer which Ellie might have inherited, tracing them became very important.”

The first task was how to track her mum down. “Fortunately, I knew my birth name, Sarah Jayne Lockwood, and I knew my birth mum was 21 when she had me, but it still meant making dozens of phone calls to adoption agencies. “Thankfully, after turning up many dead ends, I traced my adoption records.” Further checks by the agency confirmed Philippa’s adoptive mum, Linda, was alive and well.

It was then that Philippa decided to put her mum’s name into the website Friends Reunited. “Amazingly, she came up straight away, it said ‘teacher, married with three children and two grandchildren’. Seeing that took my breath away because I realised there was a whole family out there who I’d never met.”

Hands shaking, Philippa immediately sent Linda a message. “I said I had two children and wanted to see if she was my birth mum,” she says. “It was the message Linda had waited to get for over 30 years. She recalls: “I couldn’t believe it when I saw the email from Philippa. In it she explained she had breast cancer and wanted to know if it ran in the family. “That was a dreadful shock but I was able to email her straight back to confirm that I was her birth mother and there was no history of breast cancer.”

The pair continued to email one another, catching up on years of missed history. Linda says: “I explained how heartwrenching it was for me to give her up.

“I’d got accidentally pregnant with a long-term boyfriend, David. But by the time I found out, we’d split up and I was training to be a teacher. Back then, being pregnant out of wedlock was a shameful thing. With no money or husband , there seemed no choice but to give my beautiful baby girl up.”

Within weeks Linda and Philippa had swapped photos and arranged to meet. “When I saw her photo she looked just like I imagined,” says Linda, “and as she came up the escalator I spotted her straight away. “I’d been so nervous but we were chatting so much our three-hour lunch really whizzed by.” And the pair felt such a connection that just 10 days later Philippa went to Linda’s father’s funeral.

“Thankfully I was able to tell my father – Philippa’s grandfather – that I’d found her just before he died,” Linda says. “He was thrilled we’d been reunited.” Philippa adds: “At the funeral I was introduced to my grandmother and half-siblings – and I found out where I get my love for music and photography from. “It’s incredible to think my children have a whole new family to meet and get to know.”

And Linda, who lost her husband Alan, 62, 18 months ago, was excited to find out she has two grandchildren. She says: “Although my husband always knew I had a baby, it was a secret I’d carried for years. “I didn’t even tell my own children until just before I met Philippa. It’s wonderful to be able to talk openly at last.” The only missing link in the puzzle is Philippa’s biological father, David. However, Philippa admits that as no-one in her family has heard from him for more than 35 years, she might never find him – not that Philippa minds so much.

She says: “Being diagnosed with breast cancer seemed a nightmare. But I just feel incredibly lucky that not only do I have the most selfless adoptive parents – but I’ve also found my birth mum.”

Category: Recent Stories 2010, Sell my story to the Mirror, Stories sold to newspapersBy Alison Smith-SquireDecember 23, 2012
Tags: adoption stories
Share this post
Share with FacebookShare with TwitterShare with PinterestShare with LinkedInShare with WhatsApp