Do you want to look like someone famous? Do you work as a professional lookalike? Maybe you have a story to sell about having cosmetic surgery to become a lookalike. To sell your look alike celebrity story email me here Sell my story >

This is how Cheri Mangan’s lookalike story appeared in Love It magazine.

Published by: Francine Anker and Alison Smith-Squire on: 21st October 2010 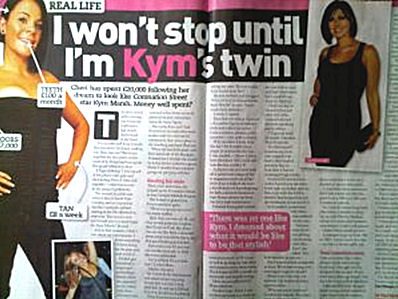 The door closed with a thump, but it was my boyfriend’s last words that echoed in my head. ’You’re addicted! I can’t handle this any more!’ he’d said, walking out. How dare he? We’d been together for two years and for most of it, things had been great. But good riddance to him!

‘I’ll go clubbing,’ I told myself. A few phone calls gathered the Getting Over A Man club together – otherwise known as my gang of girlfriends. We arrived at a club near where I live in Southeast London, and as I queued at the bar, I noticed a tall lad staring at me. He elbowed his way over. ‘Has anyone ever mentioned you’re a dead ringer for Kym Marsh?’ he said. And in that moment, I didn’t care about my lost romance. I knew everything I’d been doing for the past year was worth it…

I’d first got interested in singer and actress Kym Marsh when she appeared on the reality telly show Popstars, nine years ago. I instantly warmed to her down-to-earth personality and I envied her naturally curvy figure. My mum, June, and I had cheered her on week after week as she made it to the last 10 contestants, then won a place in the resulting pop band Hear’say.

When the band fell apart, and Kym faded out of the limelight, I missed her. I felt like she would be a nice person to know, a good friend. I wouldn’t have minded going out partying with her.

Then, a few years later, she popped up on Coronation Street as sexy barmaid Michelle Connor. She looked so glamorous, I was transfixed again. ‘What’s so special about her?’ my mates scoffed. Back then, we were all 18, and they envied gorgeous twiglets like Cheryl or Posh. But there was no one like Kym. I dreamed about what it would be like to be that good looking and stylish. Kym was a size 10, just one size smaller than me, so I felt like it was achievable.

‘Do you think I’d suit dark hair?’ I asked Mum. ‘Maybe,’ she said. So I went to the hairdressers and asked to have my long, blonde hair cut into a dark, sleek bob. It cost me £100 but I loved it. So did my boyfriend. Then I started trying to dress like her, holding up slinky, stretchy dresses and asking my man: ‘Do you reckon Kym would wear this?’

He just scowled and shrugged. ‘Why are you so obsessed with Kym Marsh?’ he said. ‘You’re much more attractive.’

‘I wish,’ I replied. Kym had everything I wanted – the perfect figure, wonderful looks and a fabulous career. I was a student, planning to be a teacher – a lot more ordinary.

Why wouldn’t I want to be like her? Yet I couldn’t be a singer or actress like she was. I was sensible – I knew I didn’t have the talent. Yet I could still look like her, couldn’t I? As Kym’s role in Corrie took off, I pored over images of her in magazines and read all her interviews. I noticed she wore a lot of black so I kept shopping for dark-coloured dresses and tops. It was obvious her look was very high maintenance.

I started having four sunbed sessions a month at £8 a time as well as getting my hair dyed and trimmed every three weeks. Plus I’d spend £100 a month on manicures and eyelash tinting. ‘How can you afford this?’ Mum asked me.

‘Student loan,’ I said. I also worked part-time as a waitress. The trouble was, every time I watched Kym on TV, I’d spot something else to copy. I loved her cute button nose and high cheekbones, but I couldn’t buy those in Topshop.

Then one day, as I watched her pull pints on Corrie, I noticed she had the most sparkling pearly whites.

‘I’ll get my teeth whitened,’ I decided. That I could do. I booked myself in and as my teeth were zapped with lasers, they tingled painfully. But an hour later, I had an amazingly bright smile. It cost £300 and for three weeks I could only eat white foods such as chicken and rice. But, even with the £100 a month I had to spend on top-up treatments, it was worth it. So I couldn’t understand why Mum was suddenly on my case.

‘Are you sure you’re not getting carried away with this, love?’ she asked. ‘You look beautiful as you are.’ But I wanted to look as beautiful as Kym. What was wrong with wanting to improve myself? Mum wasn’t the only one worried. My boyfriend didn’t approve either. ‘Why are you so insecure?’ he asked me bluntly. ‘You don’t need to change yourself.’ But it was hard to explain. There was just something about Kym’s look that I loved. So I decided to ignore them both.

A year later, Kym announced she’d had a boob job. She had gone from a 34B to a 34D and it looked so natural. So I started researching boob jobs online. I decided to have the op with Harvey Medical Group in London and booked a consultation. I didn’t tell anyone – I knew Mum would go mad. I arranged to go up from 34C to 34D – Kym’s exact new size – and have a breast uplift, too.

I was so excited that I went straight home and told my boyfriend. I thought he’d be delighted. But he said: ‘If you want them done, go ahead – but don’t do it just to look like Kym.’ I admitted I’d never thought about having a boob job before I saw Kym’s transformation. But I steamed ahead anyway.

The op was going to set me back £7,000 so I took out a loan and arranged to pay back £300 a month. It was a lot of money, but I was sure I was doing the right thing. After two-and-a-half hours in surgery, I came round to see two great mounds attached to my chest.

‘What have I done?’ I croaked. ‘Don’t worry,’ a nurse soothed. ‘The swelling will go down.’ I prayed she was right. Later that day, I was discharged and went home to Mum. I wanted to be looked after. As soon as she caught sight of my inflated chest, her face fell. ‘Why have you done this to yourself?’ she asked. ‘I thought you liked your looks.’ ‘I just wanted to improve myself,’ I said.

A month later, the swelling had gone down and I was thrilled with my new breasts.

I went shopping and picked out lots of Kym-style black dresses. I was on a high – until that day when my boyfriend finally walked out on me. ‘You’re addicted to looking like Kym and I’m sick of it,’ he’d said. Addicted indeed! I’d been so furious until the guy in the bar told me I was a dead-ringer for Kym.

Three months on, I’m still single and still mad about Kym. You might call it obsessed. But I don’t care. Being like her makes me happy. So far, I’ve spent almost £20,000 on tans, surgery, teeth whitening, manicures and my hair. And to complete my Kym transformation, I want a nose job, liposuction and fillers in my lips. I’m saving for bum implants, so I can be as pert as her.

I’m Kym’s biggest fan – and I won’t stop until I’m her twin.

BBC Apprentice romance is over
December 21, 2012

Divorce Stories – I shopped my husband to the Police…
December 23, 2012