Do you have a crime story to sell? Did you have to call the police to report a crime.

This is how Ben Legah’s story about how his dog was kidnapped appeared in the Daily Mail. 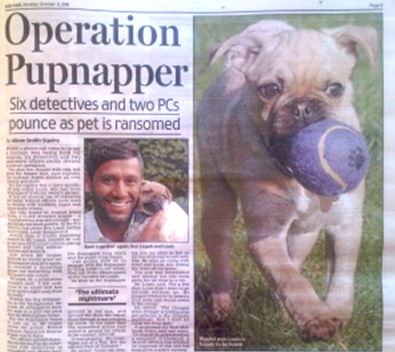 When a phone call came in to say a hostage was being held for ransom, six detectives and two uniformed officers swiftly devised a rescue operation. The plan was fraught with risk, not least the danger that, once rescued, the hostage might slobber all over them in gratitude. For the captive was a three-month-old pup called Louis, who had been ‘dognapped’ from his owner’s garden.

It was an unusual use of resources for highly trained officers more used to dealing with murders, rapes and other major crimes. The case began in August when Louis, a £1,000 designer puggle – a cross between a pug and a beagle – was let out into his back garden. In the five minutes that owner Ben Legah had his back turned, Louis disappeared.

Several days of frantic searching ensued as Mr Legah emailed 49 vets in the area with Louis’s photo, put up posters and rang animal shelters and kennels. Just when Mr Legah believed he would never see his miniature dog alive again, he received a menacing phone call demanding £500 for Louis’s safe return. Mr Legah, 25, a promotions manager, said: ‘I felt sick. Louis is so small and has never spent a night away from his family.’

Hearing the dog whimpering in the background, Mr Legah, 25, arranged to meet the man in a pub car park near his Birmingham home. But the dognapper failed to turn up, so Mr Legah called the police. Within minutes Operation Rescue Puggle was in force. Two officers arrived immediately followed by six undercover CID detectives in unmarked cars. Hours later, the dognapper rang again and the police sting began.

‘The police told us to arrange with the dognapper to bring Louis to our house, then one of the officers posed as me,’ recalled Mr Legah. ‘As soon as the dognapper arrived in his van, and opened the door, the officer burst through it and scooped up Louis. At the same time the unmarked police cars pulled in around his vehicle so he couldn’t drive off. ‘It was amazing – like something out of a film. But the officers were all fantastic.’

He added: ‘Louis ran yelping into my arms as fast as his tiny little legs would carry him. We were all crying with relief and Louis was licking the tears off our faces.’ The pup was dehydrated and thinner but has been given the all-clear by a vet.

Mr Legah said: ‘For a few days Louis didn’t want to go outside without us. He jumped whenever he heard a loud noise and would cower in the corner.’ He added: ‘The thought some stranger is holding your pet prisoner is the ultimate nightmare. Now I don’t let Louis out of my sight.’

A spokesman for West Midlands Police said last night: ‘On August 22, police received a complaint of blackmail. A 24-year-old man was arrested on suspicion of this and has been given a police warning.’