Here is how Roxanne Ayling’s obesity story appeared in the Sun newspaper. 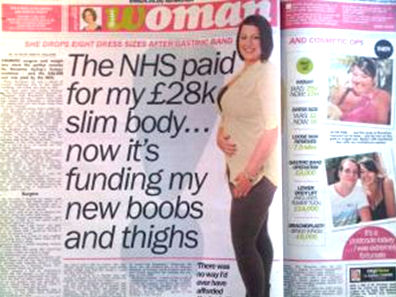 COSMETIC surgery and weight loss were the perfect remedy for Roxanne Ayling’s frumpy existence – and the £28,000 cost was paid by the NHS.

When Roxanne, 22, saw a photo of herself weighing 25st at her sister’s wedding, she knew she had to diet. And three years later student Roxanne has the slim body she’s always dreamed of. Roxanne, from Winchester, Hants, was just 19 when she had a gastric band fitted. Last month she underwent a lower-body lift, tummy-tuck and had bingo wings from her arms removed.

And her transformation hasn’t ended yet. For Roxanne is now set to undergo another £10,000 of “free” NHS cosmetic ops, including a boob job and thigh sculpturing.

Gastric band operations have soared tenfold since 2000 and weight-loss surgery now costs the NHS £32million a year – cash that critics say should go elsewhere. But Roxanne says: “I am so thankful to the NHS. The surgery has changed my life. “Before, I was so fat I hated going out. Now for the first time in my life I am confident and at last I like my body.”

Roxanne is 5ft 11in and has dropped from a size 32 to a 16, having lost 10st with the gastric band. Her family are all big-built, she says, and she spent her childhood and teenage years battling her weight, despite her mother, Tina, trying to feed her healthy food. “I always ate too much of everything,” Roxanne admits. “Aged seven, I was not only the tallest in my class but, weighing 7st, was also the heaviest. I was often bullied by being called names.”

When Roxanne reached 11 and hit puberty, the weight really piled on. “I’d started spending pocket money on chips and sweets and my weight had crept up,” she recalls. “I was 15st and buying my school uniform was a nightmare as I already took a size 16.

“By the time I reached my teens I was having sleepovers and snacks would be a couple of burgers. Friends kindly said it was just puppy fat. But the truth was my eating habits were out of control. “My mum tried to get me to exercise but that just made me crave food more.” Roxanne stopped exercising when, aged 16, she got a job in a call centre and a year later learnt to drive.

“The result was I got fatter,” she says. “My job didn’t help. We were allowed to eat at our desks and I would go through a packet of biscuits a day.” Aged 18, she was a size 32 and weighed 25st, giving her a Body Mass Index of 49, which is morbidly obese.

Roxanne says: “I hated shopping because no clothes fitted me. “I tried every diet going. But restricting food simply made me crave it more.” In desperation she visited her GP. She says: “I had constant backache and sciatica down my left leg. Most worryingly, my periods had stopped, which I found very upsetting as I worried being overweight would affect my fertility.

“Tests showed I had an underactive thyroid. My GP thought it was because I was so heavy and he prescribed diet pills.

“But the first lot didn’t make any difference to my weight. And the second lot, Xenical, simply made me feel ill. After a month on them I even put on 2lb.” Then in October 2006, Roxanne was a bridesmaid at her older sister Clarissa’s beach wedding in Cuba. She recalls: “The first nightmare was the flight. I was too fat to fit into the plane seat and ended up on the floor in the aisle.

“Then, when I saw the photos of me bulging out of my pink satin bridesmaid’s dress, I cried. I felt as if the photos of me had ruined my sister’s wedding. I knew then I couldn’t carry on as I was.” Armed with the bridesmaid photo, Roxanne returned to her GP. “I said I’d read that surgery could be successful and I begged her to refer me.”

Roxanne was referred to London’s Charing Cross Hospital, which agreed to fit a gastric band on the NHS – surgery that would cost around £8,000 privately. The band would make Roxanne’s stomach smaller. She had the surgery in October 2007. “This was my last resort and I felt so lucky,” she says. “People think having a gastric band makes losing weight easy but for weeks I could eat only pureed food.

“I had to stick to a healthy diet and within a month I’d lost a stone, within six months I’d shed almost five stones.”

A year later, Roxanne weighed 15st and had met boyfriend Ben, 24, a student. She says: “I felt much fitter. My periods had returned and thyroid problems had disappeared. Best of all I had met Ben. It was wonderful to feel confident enough to have a proper relationship at last.”

But she still hated her body. “The problem was losing so much weight had left me with ugly folds of loose skin. It still made buying clothes difficult and I still hated seeing myself naked in the mirror. “At first I was refused funding for corrective surgery because the folds hadn’t caused sores on my body and I had a BMI of 32, two points higher than the required BMI of 30 to be eligible for funding. After I was refused I went for a consultation at a private clinic and the surgeon wrote a letter to my GP recommending me for NHS funding for the cosmetic procedures.

“He argued that tightening my band to lose the extra weight and achieve a BMI of 30 would be dangerous.” Following the letter, her GP referred her to St George’s Hospital, in Tooting, south London, and she was finally approved for funding for surgery on the NHS. Roxanne explains: “I had to have a lot of consultations to convince them I really needed the surgery. So when the surgeon said he felt I was suitable for cosmetic surgery on the NHS and my trust – Kingston Primary Care – agreed to the funding, I was thrilled.

In August, Roxanne underwent five hours of surgery to her hips, tummy and tops of her thighs – procedures that would cost up to £14,000 privately. The additional op to remove her bingo wings would have cost £6,000. She says: “The surgeon removed 16½lb of loose skin. I am just delighted with my body. I feel like a new woman.”

Her surgeon has suggested she undergoes an upper-body lift, breast lift and leg-contouring surgery to her thighs before Christmas – a further £10,000 of cosmetic procedures. But Roxanne, who has just started a degree in events management, has postponed it until next summer.

She adds: “Getting NHS funding is a postcode lottery and I was extremely fortunate. Some people say weight-loss surgery and cosmetic surgery should not be given on the NHS. “But I believe it saves the NHS money. Without it, I would have got fatter and ended up needing more treatment later for obesity-related illness. “I will always be incredibly grateful.”

Last night, a spokesperson for the Taxpayers’ Alliance attacked the cost of treatments such as Roxanne’s.

They said: “It’s time people were encouraged to take more responsibility for their own health as surgery like this is fast becoming a significant drain on the NHS.

“We shouldn’t forget that only recently NICE had to deny life-prolonging drugs to cancer patients due to lack of funds.”

Kingston PCT said: “We can’t comment on individual cases but PCTs will not routinely fund cosmetic procedures such as body contouring or tummy tucks unless strict criteria regarding the health benefits are met.”