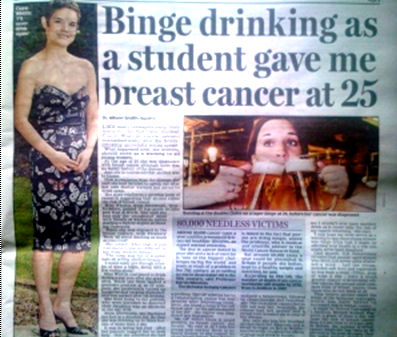 Like many teenagers away from home for the first time, student Claire Whittle threw herself enthusiastically into the heavy drinking university social scene. What happened next, she believes, should serve as a warning to all young women.

At the age of 25 she was diagnosed with breast cancer although there was no family history of the disease. And she is convinced that alcohol was to blame.

Now in remission from the disease, she said she had decided to speak out after her own doctor warned her never to drink again. Her story reinforces a growing body of research suggesting that alcohol raises the risk of breast cancer. Miss Whittle, from Stevenage, Hertfordshire, gained 12 top-grade GCSEs and four A-levels.

She said she had only the ‘occasional’ drink with friends at weekends before starting a history degree at Reading University. There she was exposed to the booze culture, with Freshers’ Week ‘all about drinking as much as you could’.

She added: ‘After that, it just continued. I was no different to any of my student friends. ‘The town was full of student bars all selling alcohol cheaply. ‘I could easily get through a bottle of wine a night, along with a few vodka shots.’

Miss Whittle continued to drink throughout a gap year after she graduated. When she then landed a graduate position at an IT company, she persistently turned up hung over and ‘reeking of alcohol’, and was sacked after six months. She went home to her parents, who were horrified to discover their daughter was an alcoholic at the age of 24. Soon afterwards, she fractured her foot in a drunken fall. By then she was drinking up to three bottles of white wine a day.

It was in spring last year – after her parents begged her to seek help – that she admitted she had a problem. Her GP referred her to centre but four months after beginning treatment, she found a lump in her left breast and – to the astonishment of her GP – the cancer was diagnosed last September.

‘My GP didn’t think it could possibly be breast cancer,’ she recalls. ‘He said at 25 I was too young and anyway there is no family history of any cancer, let alone breast cancer.’ Miss Whittle endured a lumpectomy, followed by chemotherapy and radiotherapy.

The treatment caused her to lose her hair but, mercifully, the cancer had not spread and a recent test revealed she is now clear of the disease. She says she has not touched alcohol since her diagnosis and is about to begin an MA at Middlesex University studying the effects of drugs and drink in society.

‘My oncologist actually said to me I mustn’t ever have another drink as it could raise the risk of my cancer returning,’ she says. ‘I only hope my story serves as a warning to any other young women who binge drink that it might be affecting your health in a way you might never have imagined.’

Boozing at the double: Claire on a lager binge at 24, before her cancer was diagnosed

Last month, U.S. researchers revealed that middle-aged women who drink just seven units of alcohol a week – half the recommended safe level and equivalent to a less than a small (125ml) glass of wine a day – have a much greater chance of developing lobular cancer, the second-most common form of breast cancer, than those who do not drink at all. They believe alcohol raises the levels of the hormone oestrogen, which has been l inked to increased risk of breast cancer. A study by Oxford University involving 1.3million British women suggests that one glass of wine a day can raise the risk of breast cancer from 9.5 per cent to 10.6 per cent.

In Britain, the number of breast cancer diagnoses has risen by 80 per cent in the past 30 years. Over the same period, alcohol consumption has almost doubled. Paul Wallace, chief medical adviser for the charity Drinkaware, said: ‘Only 19 per cent of adults are aware that breast cancer can be a serious consequence of drinking to excess – even for those cases where the disease is not hereditary.’