Do you want to sell your story about being an escort or prostitute?

Perhaps you are no longer on the game, maybe you have many regrets or perhaps for you it is a good way to make a living.

This is how Sarah Jones’ story about being an escort appeared in the Daily Mirror. 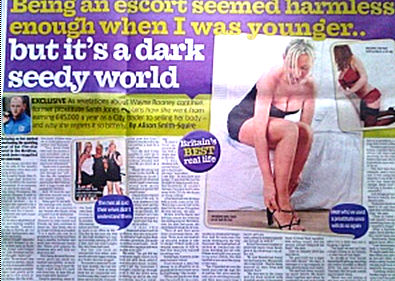 As revelations about Wayne Rooney continue, former prostitute Sarah Jones explains how she went from earning £45,000 a year as a City trader to selling her body – and why she regrets it so bitterly Relaxing on her sunbed overlooking the ­sparkling pool at her five-star hotel in the Maldives, Sarah Jones reapplied her suncream.

To the casual onlooker, she was the wife of the wealthy businessman who was also staying at the hotel. But in reality Sarah, then 23, was a “high-class” hooker being paid £2,000 by the married businessman to accompany him on his three-day trip. Like Jenny Thompson, the prostitute Rooney is said to have used, Sarah is an educated woman – as a schoolgirl she aspired to be a barrister and left school with 10 GCSEs and five A-levels who believed she had found the perfect job.

“My life was a whirlwind of parties and meeting wealthy men,” she recalls. “I rented a luxury flat in Surrey, ate out in the best restaurants and stayed in top hotels.

“I always bought beautiful lingerie and dressed in designer clothes such as Karen Millen, Coast and Jasper ­Conran. Like Rooney’s escort, I really thought I had it all.” She adds: “As an escort I was often invited to parties, which would be full of wannabe WAGs. Like me, to the casual onlooker, they were just pretty girls dressed up to the nines in ­ designer clothes. But the truth was many of these women at these glamorous parties were hookers.

“They knew these men had the money to pay incredibly well so they could have the sex they wanted ­without emotional attachment.” Sarah even hoped she might meet someone rich through her “job”. One day she imagined she might settle down and live the WAG lifestyle with a huge house and pampered children.

And 18 months ago she even married one of her wealthy clients. Today, aged 30, and with her marriage over, Sarah’s story serves as a warning to any woman who thinks being a hooker is at all glamorous. “Not only have I been shunned by some family and friends, my past continues to haunt me,” says Sarah, who is no longer working as a hooker. “It is a myth you can be a ­prostitute for a while and then meet a wealthy footballer and settle into wholesome family life. There will always be someone who will find out what you did.

“And, being an escort for over seven years has made me mistrust men terribly – so much so that while I long to meet Mr Right, I don’t know if I could ever trust him. At least 90% of men I met were married.”

Despite spending years in the business, Sarah became a prostitute by accident. After ­leaving school she went to work in an office in the City. But by the time she was 21 she had worked her way up to a trader, earning £45,000 a year, and had even bought her own three-bed semi.

But her life took an unexpected turn when, nine months after she began working as a trader, she was mugged. Too scared to leave the house for nine months, she lost her job. She says: “I took on temp work but as I commuted into London every day I used to read these ads for escorts. It sounds naïve now but then I believed escorts really did just partner a man for a night out.

“The ads said it was possible to earn up to £500 a night when I was earning around five pounds an hour as a temp.

“Before I’d lost my job I was in the middle of renovating my house. I was in such dire ­financial straits I used to fantasise about how much ­difference an extra £500 would make.” Finally Sarah replied to one of the ads. “A man answered the phone and said he ran the agency with his girlfriend. He sounded very nice and we arranged to meet later that day at his office.

“I was very ­reassured when I met his girlfriend, who was very pretty. Certainly, I had no idea then she was a prostitute. She made escorting sound easy – most clients were regulars and were known to be safe.” She adds: “The girl did say some men might expect me to have sex with them, which I was shocked about. In fact, after I left the ‘interview’ I thought I couldn’t go through with it. But my debts were mounting up and in the end the money was too tempting.”

Sarah’s first appointment was with a single man in his 40s. “I was shaking with nerves when I got to his house,” she says, “and when I saw him – he was short and pudgy – I was horrified at the thought of sleeping with him. But incredibly, he couldn’t manage it anyway and I came away with £350 for two hours of doing nothing.”

A few days later she did sleep with a client, a man in his 50s. “But it was so quick that by the time I left his house I’d forgotten I’d even had sex,” she says.

Within months Sarah had not only cleared her debts but was renting a luxury flat where, over the next few years, she entertained hundreds of men. “They all said their wives didn’t understand them,” she says. “Some men just wanted an educated woman to take to dinner. Others sadly just wanted someone to talk to. But the majority wanted no-strings sex.”

Terrifyingly, however, some men became violent. “Just because a man has money or is attractive is no guarantee he won’t turn out to be frightening,” she recalls. “When men pay for sex they see the prostitute as a commodity, as a financial transaction. And for some men this means treating you any way they want. One man lashed out as soon as I walked into the room, knocking me out cold. Others would pull you around or rip your clothes. You feel terrified as you are at the ­mercy of this man.

“Yes, I travelled all over the world and lived the high life at parties. But even wealthy men can be revolting sexually and there were many times I had to grit my teeth, mentally distance myself and just get on with it.” In fact the stress became so great that many times Sarah gave it up, returning to an office job.

“By now friends had found out and family too. My parents also suspected – they’ve been married all their lives and worked hard. “My dad was in the Army and my mum worked with disabled people. It devastated them to think their daughter was selling herself. But the money always tempted me back,” she says.

Then in January 2009 she met Kevin. “He paid £500 for a night out with dinner,” she says. A manager of a big company, he was good-looking and chatty. “He said he’d never booked an escort ­before. We didn’t sleep together and when he suggested we met up the week after for a date and not a ­booking, I agreed. “The night we met up I had a tingly feeling in my tummy – it was love at first sight.”

So much so that Sarah immediately gave up escorting and within months, in March 2009, the pair married in Thailand. But the past continued to haunt them. “Kevin was still jealous of my past and knowing I’d met him as a prostitute, I couldn’t trust him totally either.

“He was suspicious that any bonus I earned through my office job was really me ­escorting on the side. And I believe that men who’ve ­visited a prostitute once will continue to do so. “The fact that Rooney, for example, used a hooker once and is still using them is no surprise to me at all. I know for a fact that these men never change. Many don’t even see visiting a hooker as being unfaithful.”

And things got worse when Kevin’s family discovered ­Sarah’s past. “Someone mentioned what I used to do and they were so upset they cut Kevin out of their lives,” she says. “They all hated me. They just couldn’t accept this was something from my past that I wanted to forget.” After a terrible row one night, Kevin left the house and the couple have now split up.

Fortunately, Sarah has now gained more office work. “I am determined not to go back to escorting,” she says. “It might seem fun and harmless when you are young. But as you get older you realise what a seedy business it is. You can also look back and see how mentally damaging it is.

“Certainly, whatever Rooney’s hooker might be telling herself now, it isn’t the path to any sort of lasting happiness.”

Category: Recent Stories 2010, Sell my story to the Mirror, Stories sold to newspapersBy Alison Smith-SquireDecember 23, 2012
Tags: prostitute
Share this post
Share with FacebookShare with TwitterShare with PinterestShare with LinkedInShare with WhatsApp