Selling Stories to the News of the World

This is how Sarah Robinson’s real life story about how she contracted breast cancer appeared in Fabulous magazine. Sarah’s story was printed over three pages and with her consent her story has now been sold to Grazia magazine in Australia.

To sell your story about cancer, go to the sell my story contact form 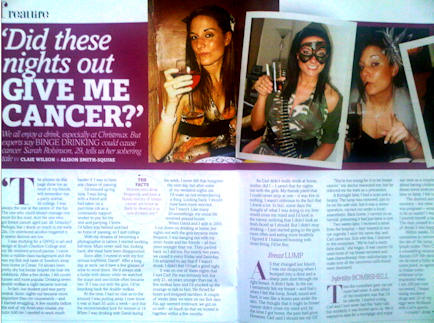 Sarah Robinson, 29, from was recently diagnosed with breast cancer and she believes binge drinking in her teens and twenties is to blame…

Sitting cross-legged on the field, I downed the last drops of cider from the bottle and tried to stand up. As I did so the world began to spin. I don’t remember much else about the first time I got drunk. Only that I was just 15 and my friends had to help me home.

And even now I don’t think I was so very different in my teens and twenties from any other young woman who enjoys a drink.

Yet aged just 29 I’ve been diagnosed with breast cancer and now, as more evidence emerges to link binge drinking with this terrifying disease, I can’t help wondering – did binge drinking cause it?

I was just 14 when I had my first sip of alcohol. That was at a friend’s birthday party and I’d had a few gulps of an alcopop and I remember wincing at first at the strong taste.

After that – and along with many other school friends – I would go for sleepovers with friends at weekends and we’d sneak some cider of a few bottles of alcopops into our bedroom.

Our mums never guessed. Looking back, I suppose that’s what made it seem daring and attractive.

Aged 16 I left school and went to college to study art and design. I got on well with my parents but longing to be independent at 17, I left home to live in a shared house with some friends.

In hindsight, our lives revolved around parties and of course drinking.

If we weren’t in the student bar at lunchtime, someone was popping in during the evening with a bottle of wine.

As a student alcohol was part of the fun. Student nights, drink all you can nights, happy student hour – they were all part everyday life.

Drinking seven double vodkas during a night became ‘normal’. And I was by far from the only one. We’d all drink the same and despite the hangovers the next day, we’d simply go to the bar the next day and laugh about how drunk we’d been the night before…

My course work suffered and a few months before the end of my three-year course, my tutor told me I needed to work much harder if I was to have any chance of passing.

In the end I quit college. I had dreamed of becoming a photographer but in the end I got a part time job as a community support worker and started working full time.

Aged 19, I met a boyfriend and went to live with him. But even though I stopped clubbing and now stayed in more, the drinking continued. 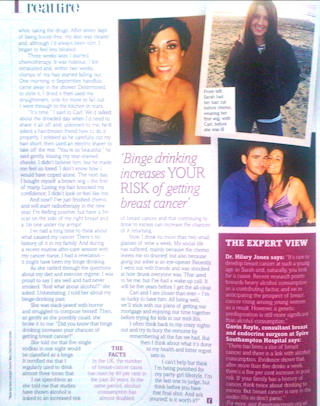 By now I was working as a care worker, and out of habit I’d come in from work, kick off my shoes and after dinner we’d share a bottle of red wine. Often we’d share two bottles of wine.

I simply saw drinking as a way to unwind. It’s only now I realise I was probably drinking around five units a night – that’s around 35 units of alcohol a week. And the safe limit for a woman is 14 units or less a week.

Aged 25, we split and I was back going out with the girls back to drinking my seven vodkas when we went out at weekends. For almost two years I partied hard. I’m ashamed to say that if I wasn’t drunk, I didn’t feel I’d had a good night.

Then two years ago on one of these nights out, I met Carl Lodge through friends. At just 21, he’s much younger than me but we really hit it off. Within months we were living together.

Carl , a health contractor, has never been a drinker but it didn’t stop me if we went out. It was always a joke that I couldn’t stop at just one drink…

All that changed in March this year. I was out shopping when I accidentally opened a door into my right breast.

Immediately I felt a sharp pain and even as I walked around the shop, it didn’t go off.

As soon as I got to the car I automatically put my hand to my breast to see if there was a bruise. It was then I felt it – a tiny lump like a hard pea.

Feeling a lump took me by surprise. But even the thought it was breast cancer really didn’t cross my mind.

After all, there is no history of breast cancer in my family and I’ve always been slim and fit and healthy.

But when I mentioned it to Carl over the phone that afternoon, he was worried.

“I want you to go to the doctor straightaway,” he said. He was so adamant I should have it checked out that I made an appointment for later that day.

Although she referred me to hospital for tests, it was just precautionary, she said.

“You are too young for it to be breast cancer.”

Two week later I had scans and a biopsy.

Still, they decided to remove it anyway.

It was a small op – I didn’t even have a general anaesthetic. . But even the doctors there said it didn’t look cancerous so I put any worries to the back of my mind.

Two weeks later, however, I came home to a letter from the hospital.

As soon as I read the words they wanted to see me and soon, I felt sick with fear.

Two days later Carl and I went to see the consultant.

I’ll never forget her words. “We’ve had a nasty little shock…” she began. And I knew then the news wasn’t good.

Tests showed cancerous cells in the lump. Everything else she said was a blur. In that moment my world collapsed. Life would never be the same again.

As the Consultant left the room, leaving a nurse to explain to Carl and I what happened next, I clung to him.

A week later I had more of my breast removed from around the lump. Fortunately tests showed the cancer hadn’t spread.

But the consultant still wanted me to undergo months of chemotherapy and then radiotherapy to be sure.

Tragically, it could leave me infertile.

So Carl and I decided to have embryos frozen. It was bizarre as although we both knew we wanted children in the distant future, we’d never really even talked about it.

Now we found ourselves plunged into a situation where there was no time. After counselling, we both decided we do want children together.

So the month before I began chemo I started IVF treatment. I’d need hormones to ripen my eggs for two weeks. Then, they would be harvested, mixed with Carl’s sperm and frozen.

And for the first time in my life I couldn’t drink. “Otherwise, “ said the IVF consultant, “It could make the IVF less likely to work.”

At first I didn’t think I could manage a week without a drink, let alone six weeks – the total time I would need to abstain.

But after a week with no drink, I immediately felt the benefits. My skin looked clearer, my hair glossier and although I was always slim, I immediately toned up.

For the first time I realised how damaging the effects of alcohol were on the body.

Fortunately, my efforts paid off and thirteen eggs were retrieved. Carl and I now have ten embryos on ice.

I began the chemo and immediately felt sick. The thought of waking up bald one day was my worse nightmare so I asked Carl to shave all my hair off.

“You’re still so beautiful,” he told me afterwards, as the tears streaked down my cheeks.

More of a shock was seeing the nurses at the hospital for aftercare. Although my diet is already good and I’ve never smoked, when they discovered how much I used to drink in an average week, they were horrified. Five vodkas is classed as a ‘binge’. It terrified me to think how I used to drink almost three times that in one night…

It was then they explained to me studies show alcohol is linked to an increased risk of breast cancer.

Drinking could also raise my chance of the cancer returning. Breast cancer care nurses say I must drink no more than four units – approximately four small glasses of wine – a week.

I have since discovered many studies linking excess alcohol with not only breast cancer but other cancers as well.

In man ways I feel so lucky. Carl and I are closer than ever and we still plan to get a mortgage and have children in our mid thirties.

It will be five years before I know if I am going to be all-clear from breast cancer.

And finding out about the link breast cancer has with alcohol has come as a huge shock, especially as boozing is so common these days.

I only hope telling my story will make other young women think twice about binge drinking. It might have consequences they have never imagined.”