This is how Marie Bentley’s emotional real life story about how she put her husband of over 20 years in prison appeared in the Daily Mirror. Marie came to me to sell a story about her experience.

Her story has also appeared in Reveal magazine and has since been sold to That’s Life magazine.

She is also about to appear on ITV’s This Morning.

I shopped my husband for sleeping with a 15-year-old 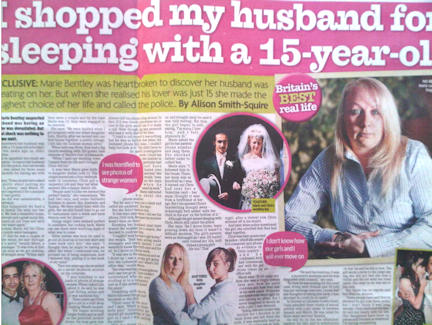 When Marie Bentley suspected her husband was having an affair, she was devastated. But her initial shock was nothing to what came next.

Marie discovered her husband was sleeping with a 15-year-old schoolgirl – a girl the same age as their own daughter.

She was so appalled she could see only one option – to report her husband of 22 years to the police. And last month Chris, 41, was jailed for three years and four months for having sex with a minor.

Marie says: “Some people have asked if I feel guilty about putting my husband in prison,” says Marie, 39. “But I haven’t regretted it for a moment and I don’t feel guilty.

“What he did was unbelievable, a massive betrayal.

Until this happened we had a wonderful family life with our two daughters. We had a beautiful home, holidays abroad and a great social life. He has ruined all our lives and we’ll never be the same again.”

Heartbroken Marie fell for Chris when the couple were teenagers.

“I was 17 and he was a couple of years older when we met through friends at a party,” recalls Marie, a facilities manager. “It was love at first sight and as soon as we got chatting, we hit it off straight away.” Within days they were a couple and by the time Marie was 19, they were engaged to be married.

She says: “We were thrilled when I got pregnant with our eldest daughter Jade. Shortly after we moved into our first house together: a pretty cottage. I felt like the luckiest woman alive.”

When Jade was three, they had a big church wedding, with 200 guests. Jade was one of Marie’s four bridesmaids.

“When I said my wedding vows I meant them for life and I thought Chris did too.”

A year later Marie gave birth to daughter Amber, now 12. The couple moved into a four-bedroom semi in Leicester, Chris got a carpentry job and they led what seemed like a happy family life.

“People used to joke we seemed the perfect family,” she remembers. “We had two cars, and some fantastic holidays to places like Australia and Tunisia. We were really busy with the girls. But we still found time to go out to restaurants once a week and have friends over for dinner.”

Things might have seemed perfect to outsiders, but looking back, Marie can see there were worrying signs of what was to come.

“After Amber was born he used to go out all done up in his best shirt and come back very late,” she says. “I thought then he might be having an affair. But when I confronted him, he accused me of being suspicious. And I believed him, putting it to the back of my mind.”

“I was horrified to see loads of photos of strange women. When I asked him about it, he said he was just flirting online and it was harmless fun.”

Three years ago Chris got a job in a craft shop making Wendy houses.

“He began working longer hours and as well as his personal mobile phone, his boss gave him a work one,” explains Marie. But a year ago she noticed he became very secretive about his work phone.

“It was strange because before he’d always left his phone lying around. In fact, if it was handy sometimes me or one of the girls would use it to make a call. Now, though, he was paranoid and had it with him all the time.

“I tried to tell myself it was nothing but he was so furtive that when the itemised phone bill came, I couldn’t help but look at it.” She didn’t have to do much investigative work. I could see one number in particular had just b e e n texted over and over,” she recalls, “even on the days w h e n h e wasn’t at work.”

Marie confronted him about the phone number.

“But he said it was just a client and called me paranoid,” she says.

But she didn’t believe him.

“A few days later when I did see his phone, I felt sick. Because the number wasn’t even on there.”

Knowing her husband must have erased the number for a reason, she decided to confront him.

“I couldn’t wait for him to get home,” she recalls. “He’d been acting really strangely and really distant. I just wanted to know the truth once and for all. So I drove to Chris’s work.

“It was late in the afternoon and as I drove up I saw a young girl going into the industrial unit where his office was,” recalls Marie.

“She was wearing a school uniform and I saw her go in. I just couldn’t understand why she was strolling in to a carpentry unit as if she already knew the place.”

Trembling with shock, Marie followed the girl and knocked on the door.

“Chris came to the door and I said, ‘Who’s in there with you?’ Incredibly he denied all knowledge of the girl so I said I was calling the police.”

With this threat, Chris let Marie into the ofice. The girl was sitting there, looking white-faced.

“I asked what was going on and straight away he said it was ‘only texting’. But then the girl began to sob, saying, ‘I’m sorry, I love him,’ and I felt physically ill.”

Marie asked the girl for her parents’ phone number and rang them. Her shocked father came to collect her.

Marie says: “I followed him to her house. There, her mum was as horrified as I was. It turned out Chris had sent her a Valentine card – her mum thought it was from a boyfriend of her age. But I recognised Chris’s handwriting straight away – sickeningly he’d added ‘with the child in his eye’ on the bottom of it.”

Although the girl denied sleeping with Chris, Marie still called the police.

She says: “As I drove home, tears pouring down my face, it wasn’t a difficult decision. The girl’s parents were as distraught as I was. He hadn’t only ruined my life, he’d ruined a young girl’s life too.” That night, after a violent row, Chris stormed off to his mum’s. And later, when police questioned the girl, she admitted that they had slept together.

Chris was later questioned by police – who’d also seized hi s computer and phone as evidence in their inquiry – a n d h e confessed he’d had ‘consensual sex’ with the girl three times on an office sofa.

Marie says: “It all came out. How she was a virgin before they met, how he used condoms and how they met at his work place. I’d known my suspicions were right he was having an affair. But I never imagined it would be with a girl. I was stunned.

“Telling Jade and Amber was terrible but I decided to sit them down and tell them the truth. It was especially hard as this girl is the same age as Jade. Hearing the story, they don’t want anything to do with their dad.”

After he was charged, Chris begged Marie to take him back.

“He said he loved me, it was a moment’s madness and he was disgusted with himself,” she says.

“By then he was waiting for the court case, living with friends and I’d told him our marriage was over. I never had any thoughts of taking him back. I was shocked he could lie so easily.”

In October at Leicester Crown Court, Chris admitted three counts of sexual activity with a girl under 16 between January and March. He was jailed for three years and four months.

He will be on the sex offenders’ register for life, and is indefinitely banned from working with children or having unsupervised contact with any girl under 16. The court heard he knew he shouldn’t have sex with a girl under 16, but he said he fell in love. The girl wrote a letter to the judge saying she did not feel she was a victim and did not want her lover jailed. She wept as he was led to the cells.

But Marie has no regrets and has filed for divorce.

“Some people have said they’re shocked he got over three years, but I don’t think it was long enough. Chris destroyed his family and her family with his lies. Our daughters have been in pieces and I’ve been so shattered I’m having counselling.

“I don’t know how our girls and I will move on from this but know I can never forgive him.”

Category: Recent Stories 2010, Sell my story to the Mirror, Stories sold to newspapersBy Alison Smith-SquireDecember 23, 2012
Tags: Relationship storiesreveal magazine
Share this post
Share with FacebookShare with TwitterShare with PinterestShare with LinkedInShare with WhatsApp