Thinking of selling your story via an agent?

Contact me via my sell my story form for free advice on employing Featureworld as your publicist.

This is how a real life story I sold for progeria sufferer Hayley Okines and her family looked in a Sunday newspaper.

Hayley’s story was sold to the Sunday People newspaper. 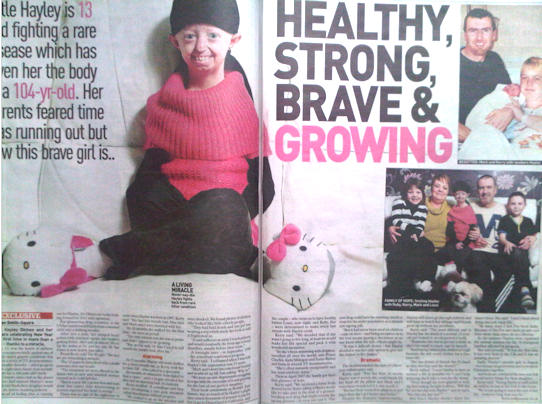 Brave Hayley Okines and her family are celebrating New Year for the first time in more than a decade – thanks to a miracle.

Hayley, 13, won the hearts of ¬millions when her courageous battle against one of the world’s rarest genetic conditions was featured in a series of TV documentaries.

The incurable disorder – called progeria – ages her eight times faster than normal, so she now has a 104-year-old’s body.

Only 52 known cases exist on the planet and doctors had warned Hayley’s mum Kerry and dad Mark their daughter would probably die before reaching puberty.

But instead of feeling time is running out for Hayley, the Okines are today looking forward to 2011 with optimism.

For pioneering drug treatment in the US has transformed Hayley from a doomed child into a walking wonder.

After just a year, her ravaged heart pulses with ¬renewed vigour, her health’s getting better, she’s put on almost 5lbs to tip the scales at 3st and her tiny 3ft 7ins frame is now nearly 2ins taller.

Proud Kerry told The People: “We feel we are witnessing a miracle. “For 13 years we have lived with a death sentence over our heads.

“The treatment we were offered in the States was so new and untested doctors warned us it could kill her.

“But in a year she’s grown 4cm and tests show that rather than deteriorating as doctors expected her heart is strong.”

There was no sign of the nightmare to come when Hayley was born in 1997. Kerry said: “She had fine blonde hair, blue eyes and Mark and I were besotted with her.

“At 10 months she walked for the first time – we were so proud.

“The only concern was she was so petite and didn’t appear to be growing.

“But as I’m only 5ft 4ins I tried to tell myself she simply took after me.”

At 13 months, Hayley still wore clothes for a three-month-old, so Kerry took her to their GP – who called in a specialist.

Six months of exhaustive tests failed to find a cause – until a biopsy revealed her skin had an alarming lack of elasticity.

“We looked it up on the internet and were shocked. We found photos of children who looked like little elderly people.

“They had bald heads and one girl was wearing a wig which made her look so odd it frightened us.

“It said sufferers wouldn’t reach puberty and would eventually die from age-related disorders, usually before their teens.”

A fortnight later – in September 1999 – the consultant confirmed progeria.

Kerry said: “I collapsed when I was told Hayley’s life expectancy was 13 years.

“Mark and I went into emotional freefall and would sit up till 3am asking ‘Why us?’

“We were on anti-depressants struggling to cope with the enormity of it and grieving for the loss of our perfect daughter.”

Their local community in Bexhill, East Sussex, was so touched by Hayley’s plight they raised thousands of pounds to pay for her to go to Disneyland in California. And the couple – who went on to have healthy babies Louis, now eight, and Ruby, five – were determined to make every last minute with Hayley count.

Kerry said: “We decided that if she wasn’t going to live long, at least we would make her life special and pack it with wonderful memories.

“So she’s been swimming with dolphins, travelled all over the world, met Prince Charles, Kylie Minogue and Justin Bieber and been in several TV documentaries.

Then in April 2007 the family got their first glimmer of hope.

Kerry said: “We received a letter from doctors in the States asking if Hayley would like to take part in the trial of a ground-breaking new drug that might reverse the ageing process – or even just halt it. This new drug could have far-reaching ramifications for the wider population as a miracle anti-ageing pill.

“But it had never been used on children – only on mice – and being accepted on to the trial meant signing a disclaimer as no one knew what the side-effects might be.

“It was a difficult choice – but Hayley decided it was her only option to give her the chance to live longer.”

The decision marked the start of a three-year rollercoaster ride.

Kerry said: “For the first 16 weeks Hayley was so poorly she could barely lift her head off the pillow and Mark and I sometimes wondered if it was worth it.

“But her body seemed to adapt to it and since then she’s got better and better.”

Despite the dramatic improvements, Hayley will never go through puberty and will have to watch her siblings and friends grow up without her problems.

Kerry said: “The most difficult part is Hayley has the mind of a normal 13-year-old girl locked in an old person’s body.

“Someone else has to get her a drink as she’s too small to reach taps by herself.

“And buying fashionable clothes is tough because she still wears clothes for a five-year-old.

“She has plenty of friends but it’s hard as they develop and she doesn’t.”

Kerry added: “I want Hayley to have as normal a life as possible but I can’t help worrying she’ll take a turn for the worse.

“Even though she now appears so well, my first waking thought is always, ‘Will this be our last day with Hayley?’ and at night, ‘Was this day her last?’”

But brave Hayley doesn’t share her mum’s fears. She said: “I don’t think about dying and just enjoy life.

“In many ways I feel I’ve been lucky. Because of this I’ve met more people and done more than many do in a lifetime.”

In the summer Hayley even organised the annual reunion for the 16 European families affected by progeria.

She said proudly: “It was the first time it was ever held in the UK and it was an amazing success.”

Sadly, Hayley’s parents split in August – but remain on good terms and even spent Christmas together.

And both are convinced the new year will herald better things for their daughter.

Kerry said: “Seeing Hayley so well makes me believe we can at last look to the future.

“We’re just going to enjoy the rest of her life – however long that may be.”