This story about how Dr Bryan Beattie is pioneering a new test to help prevent premature births – and how the test helped Tony and Julia Rees have a longed for baby girl – appeared in the Daily Mirror newspaper.

Our £80,000 baby: How one couple battled deaths and miscarriages to have the little girl they longed for. 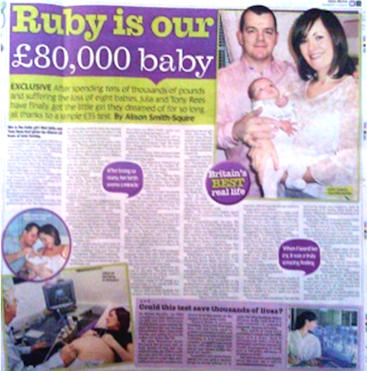 She is the baby girl that Julia and Tony Rees had given up almost all hope of ever having.

Incredibly, the couple spent £80,000 on IVF attempts and lost eight babies in their desperation to have a child. ­Tragically, three of them were lost at birth – including twins born last year at 23 weeks.

But against all the odds, baby Ruby was delivered healthy. Her birth is also extra special because she’s the first baby born following a ground-breaking £35 test that detects the signs of early labour.

Now fetal consultant Bryan Beattie, who is pioneering the procedure – currently only available privately – is calling for it to be rolled out across the UK.

He claims if every pregnant woman had the test, it could prevent the deaths of thousands of premature babies and save the NHS millions of pounds.

Certainly, mum Julia believes the method helped her. She was pregnant for the eighth time with the baby she yearned for, when the test showed she was at risk of going into premature labour, but it meant doctors could work to prevent it.

Cradling baby Ruby in her arms, Julia, 36, says: “Having gone through so much agony, we can’t believe she is finally here. Every day we pinch ourselves to check it isn’t a dream. After losing so many babies, her birth seems a miracle.”

It all began six months after the couple met in 2002, when Julia, a ­customer services assistant, found she was pregnant.

She said: “Although it was a shock, Tony and I were thrilled. But our joy was short-lived when at nine weeks I was rushed into ­hospital with stomach cramps.”

Tests discovered the pregnancy was ectopic – a dangerous condition where the baby grows in a fallopian tube – and Julia needed surgery to have it removed.

At first the couple believed they’d been unlucky with the pregnancy, and as Julia still had the other fallopian tube, she would still be able to get pregnant naturally.

Weeks later, she went for a check-up and was given the devastating news that the other fallopian tube was also damaged. It would have to be taken out.

The couple would need help to have a baby. So in 2004, following their wedding, Julia and Tony, 45, an engineer, began IVF treatment.

They were determined to have the baby they wanted so much and gave up holidays, put thousands on their credit cards and dedicated all their savings to IVF.

Julia recalls: “Going through IVF is difficult because it involves so many injections and hospital trips. We were very disappointed when the first two attempts failed.”

But on the third go, there was good news when doctors told the delighted pair they were expecting again.

The pregnancy seemed to go well. But at the routine 20-week scan stage, disaster struck once more.

Julie says: “When they told us our baby, who we called Dylan, had a fatal heart condition, Tony and I broke down.

“Over the next few weeks we visited every specialist in the country to see if ­anything could be done to save our little boy, but nothing could. Tragically, just before 24 weeks, I had to have a termination. It was the most terrible ordeal.”

Emotionally battered and bruised but still utterly determined to have a child, Julia and Tony had another go at IVF. Although they were successful and Julia got pregnant, she miscarried at six weeks.

She says: “Tony and I couldn’t believe we’d lost yet another baby. It was very hard to stay positive and carry on. However, while many people might have given up, losing our babies only made us long to be parents even more.”

After two further IVF cycles, Julia got pregnant later that year, this time with twins. She and Tony were over the moon, but her waters broke at 17 weeks and she miscarried both baby boys.

“Tony and I thought we’d never get over it,” she says. “The grief was just indescribable as we simply couldn’t believe we’d lost them too.”

Another round of IVF ended in a miscarriage at six weeks and two further attempts failed. But in 2009, on their tenth go, the couple discovered they were ­expecting boy and girl twins. Julia says: “We couldn’t help feeling excited. And although at first we expected the worst to happen, the weeks gradually passed by.

“I got larger and the pregnancy seemed fine. Thankfully, all the scans showed they were healthy. As the weeks turned into months, we ­began to ­believe that things might just work out.”

But at 23 weeks – one week before the crucial 24-week abortion limit when babies become more viable – the nightmare began again when Julia ­unexpectedly went into early labour.

“It all happened so fast,” she says. “My labour was so sudden that despite the doctors’ best efforts, nothing was going to stop it. Oliver and Maisie were born alive and medical staff did everything to save them. But they were with us for just five hours before dying in our arms.

“Tony and I were heartbroken. Two weeks before Christmas, we buried our babies and both of us were bereft.”

While many people would have given up at this point, Tony and Julia, from Caerphilly, South Wales, decided in the spring of last year to try one last time.

This time, when Julia discovered she was pregnant again, she was referred to consultant Dr Bryan Beattie at Innermost Secrets antenatal clinic, Cardiff.

“It was then, when he looked at my medical history and especially the fact I’d given birth so unexpectedly to the twins, that he suggested I take part in a new procedure on offer,” Julia recalls.

The pioneering test checks for a protein which is produced just before a woman goes into labour.

If the test is positive and the baby could be born prematurely, it gives an important early-warning sign. With this knowledge, doctors can react more effectively, ­prescribing drugs or treatment to prevent labour ­beginning or issuing steroids to ­strengthen the unborn baby’s lungs.

Julia says: “If doctors had been able to predict I’d go into early labour with Oliver and Maisie, they might have been able to give me drugs to stop it.

“Just being born even a week or two later could have meant they would have survived.”

From 22 weeks onwards, Julia took regular tests in the hope of spotting potential problems early on.

“Terrifyingly, I had a positive result at 30 weeks,” she remembers. “But this meant I could have steroid injections straight away to help the baby’s lungs mature. I knew I would be fine if I went into early labour once again.”

Fortunately, after treatment, the test the following week was negative. And in December, at 37 weeks, baby Ruby was finally delivered naturally, weighing in at a healthy 7lb 3oz.

Julia says: “When Tony and I heard Ruby cry, it truly was an amazing feeling.

“I think everyone in the delivery room was in tears as all the midwives knew what we’d gone through to have her.

“And the moment she was placed in my arms and looked up at me, I knew she would be with Tony and me for good.”

Ruby might have set the pair back financially, but they are happier than they ever have been before.

“Holidays were completely out of the question. We paid for each IVF cycle on a credit card, then saved cash to balance our books. As soon as we’d paid one lot off, we’d simply put another lot of IVF on it again.

“But we’re so glad we never gave up. Ruby has completed our lives and we feel incredibly lucky to have her.”

Sell your story to the press here: Sell My Story >

Category: Recent Stories 2011, Sell my story to the Mirror, Stories sold to newspapersBy Alison Smith-SquireDecember 22, 2012
Tags: Baby storiesInfertility and IVF stories
Share this post
Share with FacebookShare with TwitterShare with PinterestShare with LinkedInShare with WhatsApp