Sell your story about Surrogacy?

I welcome all inquiries over the issues surrounding surrogacy.

Here is how Cheryl Keye’s surrogacy story appeared in the Sunday People newspaper:

My Sister gave birth to my baby

Loving Lyndsay Keye gave her ­sister Cheryl the gift of her dreams – a baby of her own. Cheryl had been left heartbroken when she found out in her teens she had been born without a womb. 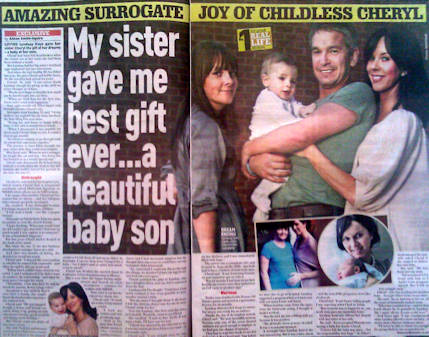 But Lyndsay had her big sister’s fertilised eggs implanted into her own uterus.

And when she had healthy 8lb 8oz Elliot last year, she gave Cheryl and hubby Jason, 38, the son they had craved for years.

Cheryl, 36, said: “I can never thank Lyndsay enough for giving us the child we never thought we’d have.

“Words can’t begin to describe how much joy he has brought into our lives.

“When we held him for the first time Jason and I cried with happiness.”

And eight-month-old Elliot hasn’t only brought joy into Cheryl’s life.

Surrogate mum Lyndsay, 32, said: “Giving birth to my nephew for my sister has been the best thing I’ve ever done.

“Seeing her and Jason so happy with a baby of her own is wonderful to watch.

“When I discovered it was possible for me to carry Cheryl’s baby for her, I couldn’t wait to get started.

“It’s been so exciting to go through such an emotional experience together.”

The journey to have Elliot brought the pair closer than they could ever imagine.

PA Cheryl said: “When we were younger, we fought like cat and dog – but doing this has bonded us in a totally special way.”

Cheryl only discovered she’d been born without a womb when she went to her GP because she hadn’t started her periods by the time she was 17.

The doctor referred her for hospital tests, which found Cheryl had a congenital ­condition called Mullerian Agenesis or MRKH which affects one in 5,000 women.

Like many other victims, Cheryl had her ovaries but no uterus – and her fallopian tubes weren’t properly developed.

She recalled: “I was distraught because I’d always ­imagined I’d have children.

“I felt such a freak – not like a proper woman.

“Although my family knew, I was too upset to confide in even the closest friends.

“I kept thinking, ‘What man would want me if I couldn’t give him kids? And how on earth would I ever explain it to someone?’ It was a bombshell diagnosis.”

For five years Cheryl tried to keep it at the back of her mind.

But when she was 22 she met business development manager Jason at a club.

And after two months of dating, she ­decided to reveal her secret.

Cheryl said: “I steered the conversation to whether he wanted kids eventually – and when he said he did, my heart sank.

“Telling him I couldn’t have children was awful. I said I understood if he didn’t want to continue the relationship – and when he went quiet I thought the worst.

“Thankfully, a few days later he said he loved me anyway. It was a huge relief.”

Accepting it was unlikely they’d ever have a family, the couple threw themselves into enjoying a life without kids.

Cheryl said: “We got engaged, bought a house and busied ourselves doing it up, getting on with our careers, having a great social life and taking exotic holidays.”

But Cheryl could not shake off her sense of loss.

She said: “I felt too embarrassed to tell people I didn’t have a womb so if they asked if we wanted ­children I’d fob them off and say we didn’t. In hindsight, I can see deep down I longed for a baby – but I didn’t want to admit how much, even to myself.”

Cheryl was 30 when she married Jason in California before honeymooning in Mexico.

But a year later she began having night-sweats and feared an early ­menopause – common for women with MRKH.

Tests ruled it out but the experience shook her.

Cheryl said: “It made me realise I truly wanted a baby.

“I had my ­ovaries and was producing eggs.

“And at the same time I read about women who carried ­another woman’s baby for them. Jason and I had discussed adoption but the thought there was a way we could have our own biological child dominated.

“So, concerned I could any day go through the change, we decided I’d have my eggs frozen and look into surrogacy.”

Cheryl confided the plan to Lyndsay, who has a daughter Eeva, now six, but is separated from the dad.

Lyndsay told The People: “Until then, I had never realised it was even possible to have another woman’s baby.

“But the more I thought about it, the more I felt the obvious choice was for me to carry Cheryl’s baby for her.”

Next day Lyndsay, who lives near her sister in Coleshill, Warwicks, went to see Cheryl.

“Cheryl was amazed by my offer but to me it was the easiest decision I have ever made – it felt totally right.”

Cheryl said: “I saw straight away she was absolutely serious. I knew she wouldn’t go back on her decision and I was immediately filled with hope.”

The sisters saw a consultant who said it could be done on the NHS – but both had to have a battery of tests to be sure.

Cheryl said: “It was frustrating because we just wanted to get on with it.

“For 18 months I had tests to see how healthy my ovaries were, then underwent an IVF cycle to produce eggs.”

Twelve were fertilised with 38-year-old Jason’s sperm and stored in a quarantine freezer for six months. Lyndsay then needed drugs to ensure her uterus was ready for an embryo.

Finally, the day of the implant arrived. Cheryl said: “We were incredibly nervous because only one of the seven thawed embryos was good enough to implant, so we had just one chance of success.”

They had to wait two weeks to see if it had worked. But Cheryl said: “Just before we were due to go to hospital, Lyndsay suggested a pregnancy test so I went over with our mum Linda and Jason.

“When Lyndsay came down the stairs from the bathroom crying, I thought it hadn’t worked.

“But she said she was sobbing with joy because it was positive.

“We all broke down in tears of relief. It was a wonderful moment.”

A fortnight later Lyndsay feared she was miscarrying. But it was a false alarm – and the rest of the pregnancy went like clockwork.

Cheryl said: “It was bizarre telling people I was expecting when I had no bump.

“But everyone was so happy for us – my work even gave me maternity leave.”

Lyndsay went into labour last August – with her sister at her side.

She said: “Eeva accepted Mummy was having a baby for Auntie Cheryl.

“I never felt the baby was mine – but the responsibility was huge.” As Elliot’s head emerged the midwife asked Cheryl if she wanted to deliver her own baby.

She said: “He was born into my arms.

“I’d wondered if I’d bond with him as I hadn’t been pregnant myself. But I fell in love straight away.”

Cheryl – who has no plans for another baby – brought Elliot home hours later.

She said: “As we laid him in his cot, all the years of heartache melted away.

“Elliot has completed us – and for that I will always be so grateful to Lyndsay. She’s made all our dreams come true.”

And Jason said: “I was overwhelmed when Lyndsay offered to have our baby – it shows such a big love between sisters.

“I’ll never be able to thank her enough for giving birth to our wonderful son.”