Sell your story to The Sun newspaper. Sell my story to the Sun.

By ALISON SMITH-SQUIRE and JENNA SLOAN 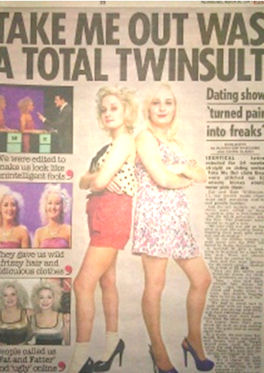 IDENTICAL twins rejected for 14 weeks straight on dating series Take Me Out claim they were stitched up to ensure blokes would never pick them.

And the uni students say the shows were edited so they sounded as ditzy as they looked.

Cat told The Sun: “The producers never wanted us to get a date.

“We were only ever put on the show to look like twinnie freaks. Standing there week after week was soul destroying.”

Gripe No1 … ‘show was edited to make us look unintelligent fools’

Up to six million viewers a week tuned into the ITV1 hit hosted by Paddy McGuinness.

It featured 30 girls a week vying to be picked for a date by four men – and those not chosen come back the next week.

Sam and Cat went dateless for the entire series – rejected by a total of 52 MEN.

‘they gave us wild frizzy hair and ridiculous clothes’

They say the outfits and hairstyles chosen for them by producers are to blame.

Sam – who had dark straight hair before the show – said: “We were horrified and broke down in tears. But despite begging them to let us go on as ourselves, they refused.

“We had to stand next to each other with our hair made to look over-the-top wild frizzy and these ridiculous clothes.”

Gripe No3 … ‘people called us ‘Fat and Fatter’ and ‘ugly’ online

They were even more horrified when the shows aired.

Cat fumed: “Most chats were edited out as if we had nothing to say. We came over as unintelligent fools.”

As a result, the pair from Sidmouth, Devon, were ridiculed in web forums.

Cat said: “People posted nasty stuff. We were called Fat and Fatter, and the Ugly Twins. We were just the novelty for viewers to pity.”

But an ITV source said: “It’s a shame the girls were unhappy as our aim is definitely to get everyone a date.”