Sell a story about multiple births 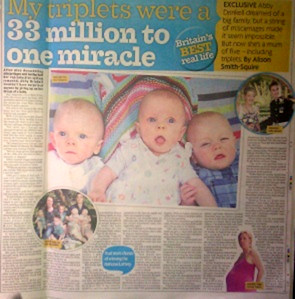 This is how Abby Drinkell’s story about her miracle triplets appeared in the DAILY MIRROR newspaper.

My triplets were a 33 million-to-one miracle

After nine devastating miscarriages and having half her reproductive system removed, Abby Drinkell wouldn’t have surprised anyone by giving up on her dream of a baby. But, desperate for a child of her own, she never gave up hope. And incredibly, after seven years of trying, her dream has come true – thanks to the humble aspirin.

Not only is she mum to two little boys, but she then gave birth to triplets last summer.

With a 33 million-to-one chance of delivering three healthy babies, she wants her story to give hope to anyone suffering fertility problems.

“Six years ago I thought my chances of having any children were bleak,” says Abby, 30. “So if someone had told me after losing so many babies I’d eventually be a mum of five, I’d never have believed them.

“My consultant even told me I had more chance of winning the National Lottery than having triplets.

“But my story proves that against all the odds, you can have a baby – miracles do happen.”

Abby’s journey began seven years ago when she began trying for a baby with her now ex-partner Steve.

“Within six months I was pregnant,” she recalls. “But at just seven weeks I lost the baby.”

Abby put it down to bad luck. “I was very upset,” she says. “But I didn’t worry too much. I knew many women have miscarriages and I believed the next time I got pregnant it would be OK.”

But over the next two years she lost one baby after another.

“It was always at around eight and 10 weeks,” she says. “I began to give up all hope of ever carrying a child. Worse, doctors were at a loss about what to do.”

Then one day, while researching miscarriages on the internet, Abby came across some -research going on at St Mary’s Hospital in Paddington, London, into recurrent miscarriage. It said some women suffer from a rare condition when during pregnancy their body makes their blood too thick. It means as the baby grows, the blood supply to it is literally cut off, causing the baby to die.

She says: “I phoned the hospital straight away and my doctor then referred me.”

Tests revealed she was indeed suffering from the condition, which is known as Antiphospholipid Antibody Syndrome.

The solution was simple – when Abby next got pregnant she simply took aspirin to thin her blood and prevent it from clotting.

Thankfully, when Abby got pregnant a few months later, she was immediately prescribed aspirin and the result was Mason, now four. A year later she got pregnant again and had Blake, three. But sadly, in 2008, her marriage broke up.

“Maybe all the miscarriages had taken their toll but Steve and I had grown apart,” she says.

Shortly after they split, Abby met Lee, 34, a local government officer, through work. And after a year together they got married.

“We decided to try for another baby. Lee didn’t have children and we wanted a child together,” she says. Abby got pregnant again and immediately began taking aspirin to stop her miscarrying. However, she suffered an ectopic pregnancy – where the baby -develops in the Fallopian tube, rather than in the uterus.

She recalls: “I was 10 weeks pregnant when I collapsed in agony and was rushed to hospital. There, to save my life, doctors had to remove the baby. When I came round I was devastated to discover I was no longer pregnant.”

But worse was to come. Along with the baby, doctors had to remove Abby’s Fallopian tube.

“It meant another problem, as with one tube, my fertility was reduced – my doctor -explained it was reduced by at least 50%. It was terribly upsetting and Lee and I resigned ourselves to the fact we might not have our longed for baby.”

However, six months later, in February last year, to their delight the couple discovered Abby was expecting again.

“I was referred to St Mary’s and put on a dose of aspirin once a day to stop me miscarrying.”

But it wasn’t until she went for her routine scan at six weeks, she was given the incredible news she was expecting triplets.

“Lee had a work meeting that day so couldn’t come with me,” she says.

“But when the sonographer told me there were three separate sacs and each of them had a heartbeat, I almost fell off the couch in shock.

“And when I rang Lee to tell him, he honestly thought it was some sort of bizarre joke. In the end I drove to his office to show him the photos of our triplets. Even our consultant is at a total loss to explain why I fell pregnant with triplets. With no family history on either side of twins or multiple births, it is a total mystery.

“In fact the consultant quoted the odds of having a multiple birth with one tube as one in 33 million.

“The only explanation medical staff can give is that with just one tube, my body went into overdrive and produced three eggs.

“But the fact they all fertilised, and the babies are not identical is even more incredible.

“Often a woman might naturally miscarry one baby in a multiple pregnancy but it seems the fact I was taking aspirin to stop me miscarrying had given each triplet a better chance of surviving.

The couple set about preparing for the triplets’ arrival – which would turn their family overnight from a family of four to one of seven.

“I did panic a little when I thought about how we would cope with three babies,” says Abby. “We have a normal three-bed semi and drove a normal car. Then I did worry about having triplets as I knew there was more chance of premature birth and other problems with so many babies.”

It was still a shock when at 27 weeks, in August last year, she suddenly went into -premature labour.

“It was totally unexpected,” she says. “I had gone downstairs to answer the door to the -postman in the morning and my waters just broke.

“Within minutes contractions began and I rang Lee to come home – he had only just got into work.”

At the hospital doctors tried to stop the labour, giving Abby drugs to halt contractions. They also gave steroids to the babies to mature their lungs.

But after five days, labour began in earnest and after an emergency caesarean the triplets were born. Sullivan weighed 2lb 4oz and was followed by Tilly, 2lb 2oz, and Malachi, 2lb 1oz.

“All of them were rushed to special care,” recalls Abby. “It was then touch and go whether they would be OK. I came home when they were a week old and that was awful coming back to the house without them.

“The next few months were a rollercoaster as all the babies needed blood transfusions and got one infection after another.

“Some days we hardly dared ring the hospital in case it was bad news and a number of times we thought Sullivan might not pull through when he got MRSA and swine flu.”

But thankfully Tilly and Malachi came home to Ilford, Essex, in November and after a worrying Christmas, Sullivan was well enough to join them in January.

“Having them all home was fantastic,” says Abby, who has now been sterilised. “I always thought having a big family would be wonderful and it is. But it is also hard work and I -certainly couldn’t cope with more children.

“Meal times can be incredibly chaotic with triplets and two boisterous brothers.

“We also had to upgrade our car straight away to a big people carrier. And our house is full to the brim with all the toys and clothes.”

But Abby insists that she wouldn’t change a thing about her life.

“I have got my dream family and after everything we went through, we feel so fortunate to have them,” she says.

“Having had so many fertility problems, even now I can’t believe that something so simple as an aspirin has helped me become a mum of five.”

Category: Recent Stories 2011, Sell my story to the Mirror, Stories sold to newspapersBy Alison Smith-SquireDecember 21, 2012
Tags: Twins triplets quads and more stories
Share this post
Share with FacebookShare with TwitterShare with PinterestShare with LinkedInShare with WhatsApp