This is how Elaine Waddy’s story about overcoming eating disorder bulimia appeared in the DAILY MIRROR newspaper.

Real life: I was a secret bulimic for 15 years 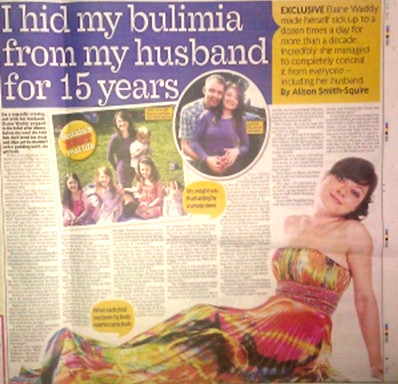 On a romantic evening out with her husband, Elaine Waddy popped to the toilet after dinner. Before she went she told him she’d loved her steak and chips and he shouldn’t order pudding until she got back.

Within minutes, mum-of-five Elaine was throwing up in the toilet. She didn’t have a bug and her dinner wasn’t off – her vomiting bout was self-induced.

Because for 15 years, Elaine had been suffering from bulimia – something she had hidden from everyone in her life, even her husband, Olly.

“Bulimia was my shameful secret,” says Elaine, 29. “I hid it so well I could make myself sick anywhere and no one would guess what I was up to.

“Afterwards, I would emerge with my lipstick reapplied and with a dab of perfume to mask any smell, as if I had literally been to retouch my make-up. Although we’ve been together for 15 years, even Olly had no idea of my double life.”

In fact, the truth only came out a year ago when Elaine’s bulimia had reached such a pitch, she would lie in bed feeling her heart racing, worrying the stress on her body might induce a heart attack.

Labourer Olly, 31, remembers that day when Elaine came home from a counselling session and said she had something to tell him.

“She sat me down and burst into tears,” he recalls. “I began to worry what it was straight away.

“But nothing could have prepared me for telling me she had an eating disorder. It was like being punched.

“I felt so gutted. How could I not have noticed something like that?”

Although never overweight, at the age of 14 a chance remark was to have a devastating effect on Elaine’s life.

Elaine, who is 5ft 3in and weighed around eight and a half stone at the time, recalls: “I was often bullied at school because of my almond-shaped eyes but then one day a girl called out: ‘Look at her fat legs!’

“I was so upset when I got home and looked at myself in the mirror. All I saw was my chubby legs and I soon decided I would have to lose weight.”

Elaine, who comes from Beverley, West Yorkshire, devised a strenuous exercise plan to get rid of what she imagined were her fat legs. “I would spend hours doing hundreds of press-ups and sit-ups.

“At the same time I cut back on my food portions.” Within a couple of weeks she had lost half a stone.

“I adored food,” she says. “I found myself starving hungry. So one day, when I knew I’d eaten too much Sunday roast, I suddenly thought ‘why not make myself sick?’

“I found throwing up the first time easy – the perfect way to eat what I liked and not put on weight.”

At first, Elaine’s throwing up after eating was occasional.

“I probably only did it about once a week as an emergency after a particularly big meal,” she says.

But when she was 15 her parents split up and with so much unhappiness around, her eating soared.

“I’d raid the fridge, eating anything I could find,” she says. “Somehow feeling full made me feel comforted. But then when I realised how much I’d eaten I’d hate myself and vomit to make up for all the calories I’d consumed.”

Elaine then began throwing up on a regular basis, once a day, to control her weight. She says: “A few months later, aged 15, I met Olly through friends and although I was happy with him, by then I was binge eating and throwing up most days.”

By the time she was 16, Elaine was studying at art college. “When I found the amount of work overwhelming, I’d turn to bingeing again – I’d wolf 2,000 calories at once.

“I’d have a packet of biscuits, several packs of crisps, chocolate and a tub of ice cream then, disgusted, I’d throw up. At its worse I could make myself sick a dozen times a day.”

At the age of 18, the couple were living together and Elaine got pregnant. She says: “The baby wasn’t planned but we were thrilled.” She felt she could finally relax.

“I knew I had to eat or I could harm the baby so my eating habits had to go back to normal,” she recalls.

After giving birth to Sasha, now nine, when Elaine was 20, she and Olly got married. Over the next seven years they went on to have Poppy, seven, Janey, six, Milly, four and Theo, two.

“Each time I was pregnant the bulimia would disappear but as soon as each child was born the worries about my body would come back,” she recalls.

“My weight went between eight and nine stone as I continued to binge. I was disgusted with myself.”

After having Theo, Elaine’s eating disorder soon deteriorated. She says: “After six months of breastfeeding, I started to feel the weight creeping on. Bingeing meant my weight fluctuated by a whole stone. I weighed myself four times a day and was sick about 12.

“With all the stress, I kept getting bladder infections and finally kidney stones. My GP didn’t twig I was bulimic. I didn’t say anything but I’d seen on the net that infections are common due to the strain on the kidneys.”

Elaine also felt permanently exhausted. “My face looked puffy – the result of swollen salivary glands caused by constantly being sick. And sometimes after throwing up my heart would race so fast, I thought I’d have a heart attack.”

Olly had also noticed her hair was falling out. “It broke off in clumps,” he recalls. “I put it down to the stress of running around with five kids. But I asked her to see a GP.”

Elaine adds: “I was too ashamed to tell my GP I had bulimia. She’d seen me in pregnancy and always said how well I coped.”

However, the GP referred Elaine to counselling and it was during the first session she confided for the first time about her problems.

“The counsellor said I should tell Olly, but I was terrified. Olly was so worried when he’d seen my hair falling out. I couldn’t help but worry what his reaction would be.

She recalls: “As soon as I saw his concerned face, I felt the tears well up. I felt so guilty.”

Olly says: “I’d heard of anorexia but knew nothing about bulimia. I felt terrible, really devastated that after all these years I hadn’t noticed.

“In hindsight now I can see little clues I missed.

“Elaine was always weighing herself but at the time I’d just put that down to her being like any woman who is concerned about their weight.”

From then on Elaine and Olly both joined local eating disorders group, Seed.

Olly says: “It’s brought us closer. We realised Elaine used to bottle up her worries and now we make a point of talking much more.”

Elaine adds: “Stopping being sick meant my skin looked better and I finally felt I had lots more energy again.”

A turning point came when after a month of eating healthily, and with her weight a stable eight and a half stone, a local shop asked Elaine if she would model their clothes. She has now been signed to an agency.

“For the first time I’ve begun to like my figure,” she says. “I still have odd days when I feel fat and old urges return. But with Olly by my side I’m on the road to recovery.”

Do you have a story to sell, why not contact me here: Sell Your story >

Category: Recent Stories 2011, Sell my story to the Mirror, Stories sold to newspapersBy Alison Smith-SquireDecember 22, 2012
Share this post
Share with FacebookShare with TwitterShare with PinterestShare with LinkedInShare with WhatsApp