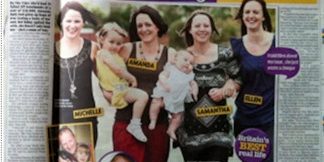 This is how Amanda Gudz’ story about how her sisters helped her become a mum of two appeared in the DAILY MIRROR newspaper. One sister was a surrogate for Amanda, another gave her the money to have IVF for her second child and a third sister cared for her child when she gave birth.

Real life: My sisters gave me the chance to be a mum 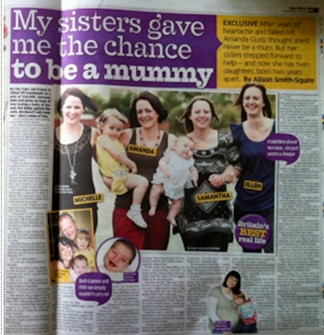 By the time she’d had 15 failed IVF treatments at a cost of £30,000, Amanda Gudz had given up hope of ever having a baby of her own. But today, against the odds, she doesn’t only have one – she’s a mum-of-two.

And it’s all thanks to the amazing generosity of her sisters.

Meanwhile, her youngest sister Michelle Allen, 25, cared for Esme while Amanda was having Thea.

Cuddling her daughter, Amanda, 37, says: “I feel like the luckiest woman alive.

“After so much heartache, my husband Darren and I feared we’d never have a child of our own.

“Having Esme was beyond our wildest dreams. But to now have Thea as well just seems -miraculous. In fact, we still look at both girls and can’t believe that after so many IVF trials they’re here.”

It is certainly a happy ending following a journey to have a family that spanned more than 15 years and cost the couple tens of thousands of pounds.

Darren and Amanda first started trying for a baby shortly after they met.

“I was just 21 and Darren was a little older,” recalls Amanda. “We both knew we wanted to have children and decided to throw caution to the wind.”

But after a year there was no sign of a baby. Amanda saw her GP and he referred them -for tests. But while Darren, 40, was fine, Amanda was told her fallopian tubes were slightly blocked and that she should try to conceive through IVF.
The first cycle failed.

“It was so disappointing,” she says.

But worse was to come when, a few months later, Amanda collapsed with agonising -stomach pain.

She says: “I was rushed to hospital and told I had managed to get pregnant naturally.

“But in minutes my hopes were dashed – I found out it was ectopic.”

This meant the pregnancy had developed in the fallopian tube – it was a life-threatening condition. The only solution was emergency surgery to remove the tube and sadly, the baby.

“It was devastating,” says Amanda.

But undeterred, a few months later the couple underwent another IVF attempt. In total the couple tried 15 times. Paid for by donations from both their dads and by remortgaging their house in Rushden, Northants, they tried without any joy over a period of 10 years.

Apart from one that ended in an early miscarriage – none of them worked. In among the IVF trials, Amanda got pregnant naturally again, but that was also ectopic and she lost her remaining fallopian tube.

“It was terrible and in hindsight I really don’t know how Darren and I coped with it,” she says. “Our lives were just dominated by trying to have a baby. We lived our lives in and around all the hospital appointments.

“At the same time friends and family were all having babies.

“Although I found comfort in helping them care for their children, and they always involved me, I couldn’t help but think how unfair it was that I couldn’t have children. I was desperate to be a mum.”

But following their final IVF bid in 2006, the couple finally decided to adopt. “Both Darren and I felt we simply couldn’t carry on any longer,” Amanda remembers.

It was when she was telling her sister Samantha, herself a mum-of-two, about their plans to adopt that the issue of surrogacy came up for the first time.

Amanda recalls: “She said, ‘what would you say if I were a surrogate for you?’ I didn’t know what to say – but the next day she told me, ‘I meant what I said yesterday’.

“I looked at her and said, ‘That would be wonderful’. From then on we never looked back. It took six months of medical tests and we both had to go for counselling.”

Amanda had a new set of eggs retrieved, which were fertilised with Darren’s sperm and two were placed in Samantha’s uterus.

“Neither of us thought it would work first time so when a couple of weeks later Sammy said she was pregnant, Darren and I were overjoyed,” Amanda says.

The pregnancy went well. “I went to every scan and appointment,” she says. “We found out we were having a little girl and at last we decorated a nursery.”

Amanda recalls: “Me and Michelle were at the birth and I was first to hold Esme.

“Darren came into the delivery room as soon as she was born and both of us were in tears.

“Words can never express how grateful I am to Sammy for such a gift. Having Esme completed us – at last we were a family.”

With the years of heartache behind them, both Darren and Amanda felt so lucky to have Esme that they didn’t consider having another child.

But in spring 2010 they received a letter from the hospital where the remaining embryos were stored. “We could either pay for the embryos to be stored for longer, donate them to science, allow them to perish or donate them to a couple,” says Amanda.

“But none of the options appealed and we found ourselves thinking that perhaps we should have one last go at IVF.
“It seemed the best way to give the embryos a chance at life.”

The couple decided not to ask Samantha. “She had done enough for us having Esme,” says Amanda, “and it wouldn’t have felt right to have actually asked.”

So this time Amanda’s other sister, mum-of-two Ellen, stepped forward to help fund the treatment. “I was telling her about our predicament and she simply wrote me a cheque,” she says. “Without that Darren and I simply couldn’t have afforded to go ahead.”

All eight stored embryos were defrosted – but only four survived and out of those only two were viable enough to implant.

“After all these years of IVF and having had Sammy as a surrogate, I didn’t for a moment think it would work,” says Amanda.

Still, she couldn’t help but hope for the best and when she plucked up the courage to do a pregnancy test, she was stunned that it turned out to be positive.

Despite fearing that the worst would happen again, Amanda had a trouble-free pregnancy.

She says: “Sammy had been fantastic when she was pregnant with Esme, explaining how it felt when she kicked and involving me in every way possible.

“But it was a great experience to be pregnant myself. As my bump grew I could barely believe that after everything we’d gone through I was actually having a baby.”

When the time came for Amanda to give birth in March, sister Michelle, who doesn’t have children yet, stepped in to care for Esme.

And following an elective caesarean, Thea was born weighing 6lb 12oz. Incredibly, although they were born two and a half years apart, she and Esme are twins.

“Her birth was surreal,” Amanda recalls. “After so many disappointments, it was almost as if it was happening to someone else.

“Bringing her home was so emotional. We’d never dared to hope we’d give Esme a little sister and to see both our daughters together was a poignant moment.”

In fact, three months on and Amanda can still hardly believe she is a mum-of-two.

“My midwife jokes that I must be the only mum who never moans about getting up in the middle of the night,” she says.

“But I am just so thrilled to be a mum that I don’t even mind night feeds. I just feel so incredibly lucky to have such beautiful daughters.

“I actually feel like the luckiest mum in the world – and also so incredibly fortunate to have such supportive sisters.”

Category: Recent Stories 2011, Sell my story to the Mirror, Stories sold to newspapersBy Alison Smith-SquireDecember 29, 2012
Tags: Surrogacy stories
Share this post
Share with FacebookShare with TwitterShare with PinterestShare with LinkedInShare with WhatsApp