This is how Mark and Tricia’s story appeared in the Sunday Mirror.

If you have a story to sell for justice, contact us here: Sell story for justice > 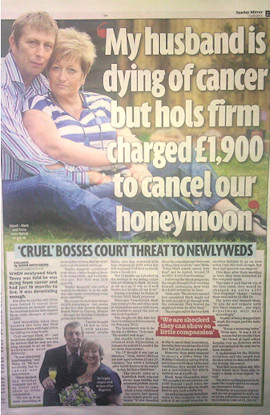 When newlywed Mark Tovey was told he was dying from cancer and had just 18 months to live, it was devastating enough. But after he and his wife Tricia were forced to cancel their ­honeymoon on doctors’ advice, the heartless holiday firm slapped them with charges of almost £2,000.

And incredibly, when they queried the fees the firm ­threatened them with legal action for taking too long to pay.

Civil servant Mark, 49 – just back from Afghanistan – was told by doctors that he may not live long enough to go on the honeymoon next ­February.

“It was absolutely heartbreaking,” says Tricia, 53. “We had no choice but to ­cancel our ­honeymoon.

“We’re shocked any holiday ­company can be so cruel andshow so little ­compassion.

“It’s not as if we were cancelling at short notice or even that we don’t have a good reason not to go.

“Mark’s hospital consultant even wrote a letter begging them to be sympathetic and waive the charges. But that was just ­ignored.

“Mark’s diagnosis was such a terrible bombshell. To be hit with this has made everything even more upsetting.”

“I never thought I’d fall in love with anyone again,” recalls Tricia, who was widowed with four children in 2004 when her first husband Fred died suddenly from a blood clot.

“But 18 months ago I plucked up the courage to try dating online and got chatting to Mark. As soon as we met up, it was as if we’d known one another all our lives.”

During a holiday to Dubai in October 2010, Mark proposed. Tricia says: “I was thrilled. Mark was coming to the end of his spell in Afghanistan and we both knew we wanted to spend the rest of our lives together.”

The couple set the date for their wedding and honeymoon for February 2012.

“The honeymoon was to be the trip of a lifetime,” Tricia says. “We couldn’t wait to go.”

But shortly before Mark ­returned from Afghanistan in January, he noticed he needed the loo more than normal.

“His GP thought it was just an infection,” Tricia, whose children are now aged between 23 and 29, explains, “but when a fortnight after tablet treatment he wasn’t better, he had a blood test.”

The results came as a bombshell. Mark, who had always been healthy, had advanced prostate cancer.

Worse was to come when a scan confirmed the cancer had spread to his lymph glands and bones. “It was dreadful when the consultant said there was nothing they could do,” says Tricia. “When Mark quietly asked, ‘how long?’ and he replied, ‘around 18 months’, it was ­heartbreaking.”

Following the bleak prognosis, the couple brought their wedding forward, exchanging their vows in a hotel ceremony in June.

Tricia says: “The doctors weren’t just concerned Mark might not be well enough to go through with the ceremony, they feared he might not even be alive then.”

The couple called the tour firm in May to cancel their ­honeymoon, knowing they would lose the £500 they had put down as a deposit.

However, they were stunned to receive a letter from the ­Holiday Collection saying that in accordance with their terms and conditions they would have to pay a cancellation fee which worked out at £1,285.15.

Mark, from Gloucester, says: “We accepted we would lose our £500 deposit I paid when we booked but had no idea we would have to pay such a hefty fee.

“As well as having my ­consultant write to the company, we also asked if we could transfer to another holiday to go on now while I am still well enough. But they just ignored our request.”

Five days after their wedding in June, they were contacted by the company again.

The letter also warned them: “If you do not comply with this final request… our legal ­department will deal ­accordingly.”

Fearful of being dragged into court, the couple paid the hefty amount.

“It was a menacing letter,” Tricia says. “It was a lot of money but we couldn’t face the threat of legal action hanging over us. However, we’re still astonished at the way we’ve been treated.”

A spokesman for the Holiday Collection said the couple had decided when booking not to take out holiday insurance.

“Had this been taken out, Mrs Tovey would have been able to make a claim in this regard,” he said.

“We did everything possible to assist the couple and try to secure an alternative holiday.

“However, as a gesture of goodwill we are prepared to make an ex-gratia refund in respect of the cancellation costs of £1,285.15.”

Category: Recent Stories 2011, Sell my story to the Mirror, Stories sold to newspapersBy Alison Smith-SquireDecember 22, 2012
Tags: Cancer stories
Share this post
Share with FacebookShare with TwitterShare with PinterestShare with LinkedInShare with WhatsApp