This is how Rebecca Jones’ story about being an anorexic appeared Closer and in The Sun newspaper.

If you have a real life story about an eating disorder to sell contact Featureworld here: Sell My Story > 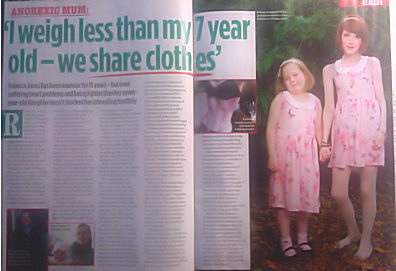 And, despite nearly dying as a result of her eating disorder nine months ago, she insists her tiny dress size makes her proud.

Medical secretary Rebecca often buys two outfits in the same size when out shopping — one for little Maisy and another for herself.

She said: “Wearing the same clothes as Maisy gives me a sense of pride. It’s wrong, but it makes me feel good. I don’t think I’m thin, I always see myself as bigger.”

Rebecca, who lives on a diet of toast, fizzy energy drinks and Cup-a-Soups, added: “About 18 months ago I went down to 5st.

“I picked up one of Maisy’s skirts and it fitted perfectly. Maisy is 4ft 5in and wears 9-11 clothes. We share tops and jeans.”

The mum, from Manchester, began dieting when she was 13. At just 5ft 1in, she had ballooned to 15st from comfort eating after her parents’ divorce. By the time she was 18 and at uni, Rebecca was 6st. Her body was so weak her periods stopped and she thought she could not bear kids with her boyfriend.

She was 26 weeks pregnant before she realised Maisy was due.

Rebecca said: “I had no idea. I was still a size 6, I hadn’t put on weight and my stomach was flat.” Thankfully Maisy was born healthy at 5lb 7oz. After her February health scare, doctors told Rebecca her anorexia had caused part of her heart to die. Experts have since warned she could suffer a fatal heart attack unless she starts eating properly.

Desperate Rebecca is now on an NHS waiting list to see a psychologist. She said: “I’m terrified I won’t see Maisy grow up.

“I’d love to eat. I can think of nothing nicer than going out for lunch with Maisy — but I can’t.”

Yet Rebecca is determined to ensure her daughter does not follow in her footsteps. She said: “If she wants chocolate, I say yes — I don’t want to deny her food.” 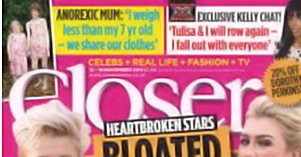 Gastric bypass abroad left me in a wheelchair…
June 20, 2016