This is how Jeanette’s story about her big boobs appeared in the Daily Mirror newspaper.

Do you have a big boobs story to sell? If so you can sell it here: Selling a story > 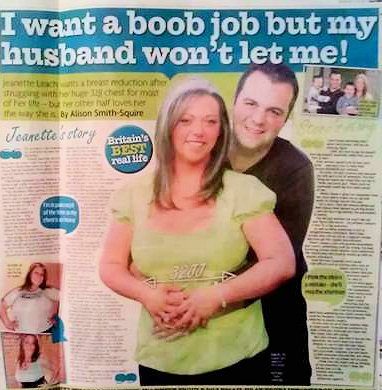 For as long as I can remember my nickname has been ‘Jen Big Boobs’.

Friends joke that the first thing they see when I walk through the door is my chest.

I know they mean no harm – just as ­­I know that my husband, Steve, adores them ­­– but it’s reached the point where they have ­­got to go.

They simply dominate my life. Whether I’m trying to get comfy in bed or walking down the street I can’t forget them for a moment.

They are always there, getting in the way of everything I do. In primary school I was the first in class to wear a bra. So when my pals changed in the classroom for PE, I’d change in the loos.

Big boobs weren’t a huge surprise – they ­run in my family. But it was embarrassing and ­I didn’t like being different.

They’ve singled me out for loads of attention. Buying bras has always been and still is a nightmare. I have to order specially-made ones that are ugly and cost up to £50.

By the time I was 20 I’d already gone to see ­my GP about a reduction operation. He was ­sympathetic but said I was too young for ­surgery. He advised me to wait until ­I’d had children and said that ­breast-feeding would help shrink them.

But after I had my sons, Josh, 4, and ­Matthew, 2, they were ­as big as ever. I stopped breast-feeding as I was ­worried they would suffocate my kids.

I went back to my GP in Rochdale a year later but he said I was too overweight ­as ­a size 22 and needed to slim.

I started dieting when Matthew was ­11 months. ­I was so shocked by how fat I looked in my wedding photos, it made me cry.

I also joined a gym and since then I’ve lost six stones and am now a size 12. I’m proud ­of myself but my boobs are even more ­noticeable on my petite 5ft 3in ­figure. They stick ­out too ­much and look out ­of proportion.

I long to run to keep ­fit but even in the best sports bra, they bounce up and down like ­beach balls.

Added to that, I’m in constant pain most of the time. Making the bed and washing dishes kills as my chest is just so heavy.

Steve might not realise it but I have to sit down for regular rests because of them.

Buying clothes is another nightmare. It’s virtually impossible ­to get dresses to fit and I’m forced to ­buy separate tops and skirts or trousers. T-shirts look too revealing – ­indecent even.

Then of course I get lots of unwanted attention from men. I’m sick and tired of them talking to my chest and even I feel ­self-conscious that people are staring at my boobs when I pop to the shops.

It’s left me with such a huge complex I now have a permanent hunchback where I’m constantly trying to hide my boobs.

At 28, I’m happy with our two boys and don’t want any more children, so the time ­feels right for a breast reduction. A more manageable C or D cup would be about right. But alas my NHS trust no longer funds the ­op so I’ll have to go private.

I’ve visited a surgeon who told me it would cost around £5,000. Steve has begged me ­not to go ahead with it, but it would change my life.

It will be a huge relief to get these boobs off my chest. I can’t wait to go out shopping for normal clothes – and for my new life!

Steve’s story: I love my wife’s big boobs and don’t want them reduced

I don’t mind admitting that I ­adore Jen’s boobs. She has an amazing figure.

I defy any man to say he doesn’t love big breasts, especially when they are as ­ firm as hers.

Even women would love to have Jen’s ­body – and many pay to have their ­boobs enhanced not reduced.

It’s lucky I’m not a jealous man because my wife gets a lot of attention. The first thing my mates say when they see her is, “Wow, you lucky guy”. These sorts of comments make me feel really proud ­of her.

While I know it gives her backache I love her chest and it makes me so sad she wants to change herself this way.

For a start, I feel her breasts define her. She’s always been known as Jen Big Boobs ­– and she has a big, bubbly, fun personality to match.

I’m not just worried she won’t like her new figure afterwards – my primary concern is that it’s a big operation.

As well as being expensive, it isn’t a straightforward procedure. She’ll have ­to take time off her job as a support worker and even get her ­nipples repositioned.

There’s always a risk with general anaesthetic and ­I worry something could go wrong. I’ve read horrifying stories where women have contracted life-threatening infections or ended up with no nipples afterwards.

Even the best surgeons warn about ­side-effects such as scarring and a lack of nipple sensitivity. It ­also means that Jen probably won’t ­be able to ­breast-feed again.

Operations like this sometimes need doing more than once. It might sound ridiculous but I’m concerned that once she’s had the procedure, she’ll find something else about herself that could be tweaked. I worry she’ll become addicted to plastic surgery.

I’d also love for us to have another baby at some point– it would be wonderful to have a little girl. Although Jen might not feel ready, she’s still young.

But she’s already said that if she has this operation, she won’t want any more children in case it ruins her new figure.

I’ll always fancy Jen – but if she has this procedure, suddenly she will blend in with everyone else and the very thing that makes her so unique will be gone.

I think that she might end up missing all the attention. In fact I think the whole idea is a big mistake and believe that she will ultimately regret it.

Category: Recent Stories 2011, Sell my story to the Mirror, Stories sold to newspapersBy Alison Smith-SquireDecember 22, 2012
Tags: Cosmetic surgery
Share this post
Share with FacebookShare with TwitterShare with PinterestShare with LinkedInShare with WhatsApp