Steve, 37, and Michelle Shelton, 32, seemed the perfect couple. But as their heartbreaking diaries show, their family was being torn apart. 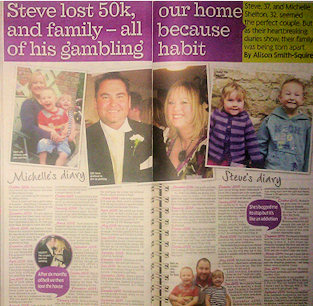 October 2005: Am thrilled. Steve and I moved into our brand new semi in Manchester today.

So glad I plucked up the courage to do dating online. Steve is kind and has a great sense of humour – everything I dreamed of. He told me he liked a flutter at the bookies, but what man doesn’t?

December 2005: It’s only days to Christmas but Steve says our joint account needs topping up by £500. Can’t understand why as we both pay more than enough to cover the bills.

March 2006: Am furious. I can’t believe the account is overdrawn again. It’s only about £30 but I’m angry. “I got carried away at the bookies,” says Steve. He promises to stop.

April 2007: With our beautiful home and a baby on the way I should be happy. But I can’t help worrying he’s gambling more.

June 2007: My last day at work before maternity leave and everyone cheers when Steve turns up in a hired Mercedes to pick me up. Later in a restaurant, he says, ‘Will you marry me?’ I feel our baby kicking as I say yes!

August 2007: Jake is born. As I watch Steve cradling his son in his arms, I feel proud we’re a proper family at last.

October 2007: I cannot believe how thoughtless Steve is. I went to park the car to go shopping and found all the change for the parking meter gone.

January 2008: The joint bank account is overdrawn again – by £500. I know it’s just after Christmas but this is too much. “I can’t carry on like this,” I tell Steve.

March 2008: Can’t believe I’m pregnant again so soon after Jake. Am happy but feeling scared about our financial situation. I tell Steve I will take charge of all the money. Feel mean about giving Steve “pocket money” but I can’t trust him.

September 2008: Steve and I are married. I dreamed of a big white wedding. With all the money worries, though, we can only afford a register office do. But it’s a perfect day.

October 2008: Tilly is born. “She’s my little princess,” says Steve, nuzzling her head. “No more gambling for me.”

February 2009: Steve is looking after the kids while I go back to my sales job. Luckily, insurance is paying the mortgage for a year but without Steve’s salary, money is tight.

March 2009: I saw on my statement he’d used my debit card to withdraw £140. He says he used it to gamble online. If it weren’t for the kids I’d leave.

April 2009: My world has fallen apart. First, we had a burst pipe. But worse, Steve cancelled the insurance without telling and gambled it – we can’t get the £1,000 damage fixed.

June 2009: Every day bailiffs turn up, demanding money. I dread opening the door or answering the phone. My GP’s put me on anti-depressants. I’m signed off sick, so I’m not earning.

December 2009: Christmas is hard on benefits – the kids get few toys.

June 2010: We lose the house. We have found a cheap cottage to rent in Lincoln – I beg him to get help.

December 2010: The kids and I have moved in with friends. Being on our own feels a huge relief.

September 2011: I am building a new life. Steve wants me to come back but I’m filing for divorce. His gambling has ruined everything.

November 2006: Feel guilty as I take a tenner out of our joint bills account. But then I can treble my money if the horses come in today… I’ve always ­gambled. Aged 19, it was the horses and then the football and roulette machines. Michelle knows I like the odd ­flutter.

January 2007: I know Michelle doesn’t like it but I’m only going to put a fiver on the football. Can’t help ­thinking of everything we’ll need for the new baby and how much it would help if I won some money. Then Michelle would be pleased.

October 2007: Had a big row tonight with Michelle. She’s right to be angry. Even I didn’t realise how much money I’ve been spending. I know it’s the children’s cash but I just can’t seem to stop myself. I promise I’ll get help.

October 2008: It’s been a rocky year but looking at Tilly’s innocent face as she is born, I swear that I will not ­gamble any more.

December 2008: Feel racked with guilt about being made redundant. I know lots of people are in the same boat. I was concentrating so much on gambling that I took my eye off the job.

January 2009: Michelle’s not speaking to me. A friend saw my car parked outside the bookies. She’s begged me to stop but it’s like an addiction – and I have to have a fix. I bet on anything – ­football, roulette, horses. They’re small bets – a fiver or tenner – but they add up. I think about it 24/7. It’s wrong but I can’t help it.

March 2009: I’ve hidden the bank statement this month. I was shocked to see how much we’re overdrawn.

My brother has given us some money to help see us through the month. But I decide that the only way out of this mess is to gamble and try to claw back some money.

May 2009: Michelle has given me an ultimatum – she’ll leave unless I go to Gamblers Anonymous. She was trembling as she said it. I feel wretched. Everyone’s ­telling me that I must get a grip. I have to otherwise I am going to destroy my family.

June 2010: We’ve lost the house but we’re making a fresh ­start. I’m going to Gamblers ­Anonymous and our rented house is 15 miles away from the nearest bookies.

September 2010: Michelle was in bed when at 3am I clicked on to a gambling site on the internet. I know it was wrong but I used her card and before I knew it I’d lost £200. I don’t know how I will tell her.

October 2010: Michelle has gone away for a week to Spain by herself. She says she wants to be alone for a while to clear her head.

November 2010: Michelle is back but still snappy. Our sex life is non-existent now. I’ve hidden some of the joint ­account ­statements again.

December 2010: The house is freezing and I’m alone but I don’t have enough money to heat it. A few hours ago Michelle slammed the door and left for good with the kids. I’d gambled our last £200 and she couldn’t cope any more.

March 2011: I’ve got a new job in recruitment and have moved to a new house. I’m seeing the kids every ­weekend and am stopping gambling – not long before we’re reunited, I hope.

June 2011: Feel suicidal. Michelle won’t have me back and I have gambled another £300. I texted Michelle to say goodbye – I plan on hanging myself. What is there to live for? Then my brother rings and I know I can’t go through with it. The only way is to get proper help.

September 2011: Having counselling from Gamblers ­Anonymous and have moved to be nearer the children and Michelle. I still love her but she has filed for divorce. I wish I could turn back the clock. I’ve lost everything for a flutter