This is how Andrea Goodrich’s story about her twins appeared in the Daily Mail newspaper. 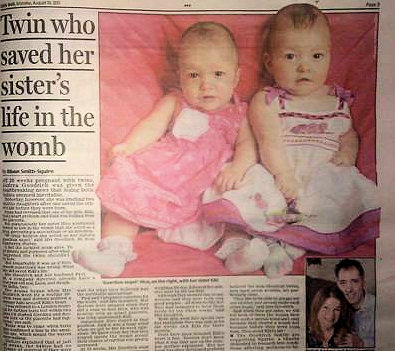 If you would like to sell your story about twins, triplets or quads then contact us here: Multiple birth story to sell >

At 20 weeks pregnant with twins, Andrea Goodrich was given the heartbreaking news that losing both babies seemed inevitable.

Yesterday, however, she was cradling two healthy daughters after one saved the other’s life before they were born.

Scans had revealed that one of the girls, Kiki, had a heart problem and fluid was leaking from the placenta. But miraculously her sister Nico positioned herself so low in the womb that she acted as a plug, preventing a miscarriage or an infection.

‘We truly believe she acted as her sister’s guardian angel,’ said Mrs Goodrich, 39, from Camberley, Surrey.

‘I feel the luckiest mum alive. To all intents and purposes after what happened the twins shouldn’t  be here.

‘But remarkably it was as if Nico sensed something was wrong. What she did saved Kiki’s life.’

Mrs Goodrich and her husband Paul,  46, a company director, already have a  four-year-old son, Luca, and daughter, India, two.

The drama began when Mrs Goodrich went for a routine 20-week scan and doctors noticed a strange halo around Kiki’s heart.

‘I was referred to a London hospital for further tests but within two days I’d started bleeding and doctors told us the placenta had ruptured,’ she said.

Worse was to come when tests also confirmed a tear in the amniotic sac, which meant the waters were leaking.

Doctors explained that at just 20 weeks, the babies had no chance of survival if they were born. All medical staff could do was admit her to hospital and wait for what they believed was the inevitable miscarriage.

‘Paul and I prepared ourselves for the worst,’ said Mrs Goodrich.

‘But doctors were amazed when they did a scan to find Nico, who was healthy with an intact placenta, was lying underneath Kiki.

‘Amazingly, Nico stayed in that position. And it was a huge relief when we got to the 24-week milestone.

We knew every day that they stayed inside the womb meant their chance of survival was greatly increased.’

‘Although they seemed tiny to me, doctors said they were both very good weights – all down to the fact Nico had managed to keep them inside for ten whole weeks,’ said Mrs Goodrich.

‘Both girls went into special care but thankfully Nico was only in for six weeks and Kiki for three months.’

Tests have since revealed Kiki’s heart is fine. ‘Doctors don’t know what it was they saw on the scan,’ her mother explained.

‘But her heart has since developed perfectly normally.’ The couple say they have noticed the non-identical twins, now aged seven months, are particularly close.

‘They like to be able to always see one another and already make each other laugh,’ said Mrs Goodrich.

‘And when they get older, we will tell both of them the reason they have such a special bond isn’t only because they shared a womb but because before they were even born, Nico saved Kiki’s life.’

• The Goodrich family are  supporting Sparks, a charity  dedicated to research into conditions affecting mothers-to-be. www.sparks.org.uk