Meet the oldest person in Britain to have full sex change 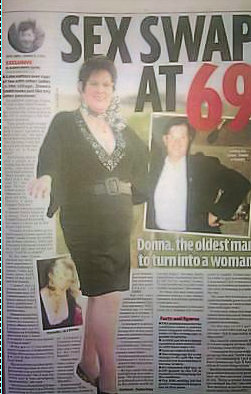 This is how Donna Smith’s story of how she became Britain’s older person to undergo a full sex change appeared in the Sunday Mirror.

If you’ve had a sex change then do contact us here: Sell Sex change story >

As she natters over cups of tea with other ladies in the village, Donna Smith looks just like any other ­pensioner. But until five years ago, Donna, 74, was a man called Donald.

Then in 2006, at the age of 69, she became the oldest person in the UK to undergo a full sex-change operation.

“Some people might wonder why I­ bothered to go through such a major operation at such a late age,” she says in her first-ever ­interview. “But knowing I will die as a proper woman has come as a huge ­relief.”

Now Donna, who is still a virgin as a woman, has one more wish… she would love to meet a ­toyboy: “Most people say I don’t look a day over 50,” she says. “I’d love to have a male ­companion to grow old with, ideally a man ­younger than me.”

Donna’s ­tortuous ­journey to become female began as a young child when as Donald ­Edmund ­Bodsworth she liked to dress up in her mum’s high-heels.

“I loved to try her make-up too, but it caused endless ­upset in the family,” ­recalls Donna, the middle one of three ­children. “Although I regularly told them I wanted to be a little girl, they would just reply, ‘Don’t be so ­stupid’.”

By the time ­Donna reached her teens she’d experienced terrible ­bullying at school. “Girls and boys were both wary of me and I had few friends.

“I didn’t fancy women at all. I did fancy some men, but I always used to fantasise about being their ­girlfriend. I didn’t want them as another man.

“Meanwhile my Dad, who was a bricklayer before he became a prison officer, tried to toughen me up by ­taking me on to ­building sites with him. I hated it so much I used to cry myself to sleep at night.”

At the age of 17, she left the family home in a Bedfordshire village after saving money from her job in the kitchens of alocal hotel.

She soon found ­another kitchen job and says that by then she felt sure she was a woman trapped in a man’s body. “Yet it was the 1950s and it was ­absolutely ­unacceptable,” she says.

She was so worried that in her early 20s she went to her GP, who referred her to the gender clinic at London’s ­Charing Cross Hospital, where she was seen by Dr John Randell.

“For the first time someone under­stood what I was going through,” she says.

Donna was put on hormones. Within weeks she started to grow breasts, her beard was less noticeable and her penis began to shrink.

But she says while she felt happier, ­attitudes weren’t like they are today. “Had I turned up to work dressed as a woman, it would have been a ­national scandal.”

So she had to ­continue to dress as a man during the day. But in her spare time, she ­entered a ­female beauty pageant.

“I always wore a lovely long blonde wig,” she says. “I was so ­ convincing I actually came third.”

For the next 20 years she continued to live as a man by day and a woman by night.

By her early 30s she had fallen in love with a man. “We lived together as husband and wife but to the outside world he was my lodger,” she says. Sadly, when Donna reached her late 40s he left her for another woman. “It was ­terrible as I couldn’t even confide in anyone,” she recalls.

By then she had read about someone having a sex change operation, and doctors agreed she could have one. But she would have to live and work as a ­woman for several years to qualify.

Donna says: “I had bills to pay and ­working as a man meant I got so much more money, so I ended up back in the old cycle of dressing as a man in the day.

“By now the hormones had made my breasts grow to a 44DD – it was agony as I had to flatten them with tight vests.”

It was only when she finally retired from her job at Vauxhall Motors that she was able to live ­properly as a woman.

“At the age of 69 I got to the top of the NHS waiting list,” she says. “But it was better late than never.”

She finally underwent the five-hour surgery in June 2006 at Charing Cross Hospital.

“I remember the nurse waking up me up. She said, ‘You’re a Miss now” and immediately I put my hand between my legs. It really felt as if I were being reborn.”

She then moved to ­Mablethorpe, Lincs, where she says most ­people have no idea about her change of sex. “Being a proper woman has changed my life,” she adds. “But meeting someone special would make my life perfect.”

Category: Recent Stories 2011, Sell my story to the Mirror, Stories sold to newspapersBy Alison Smith-SquireDecember 21, 2012
Tags: Transgender real-life stories
Share this post
Share with FacebookShare with TwitterShare with PinterestShare with LinkedInShare with WhatsApp