This is how Louise Palmer’s story appeared in theSUNDAY MIRROR and here is the write up from the DAILY MAIL website:

Facebook banned me from my dead daughter’s page… to protect her privacy: Mother’s anguish after teenager dies of brain tumour. 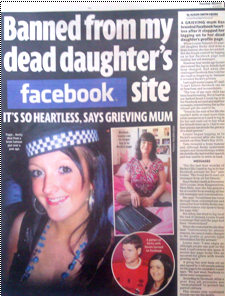 A grieving mother has branded Facebook ‘heartless’ after it stopped her logging into her dead daughter’s page.

When Louise Palmer’s 19-year-old daughter died from a brain tumour, she was devastated. But at her lowest points, she found comfort by logging into Becky’s Facebook page and reading her old messages.

However, four weeks ago Mrs Palmer discovered the log in details had been changed. And when she challenged Facebook they told her she could no longer login – due to fears it could invade Becky’s privacy.

Last night the 47 year old nurse said: ‘I can’t believe Facebook can be so heartless and inconsiderate. The loss of my only child has been heartbreaking. But at least in my darkest hours I could login to her Facebook account and read her messages remembering her as the vibrant girl she used to be.

‘Becky had no privacy from me – we shared absolutely everything. Towards the end of her life she couldn’t write or read more than a few sentences so I used to log in for her and read out to her what her friends were up to. But also I fail to see how anyone can invade the privacy of a dead person.’

Mrs Palmer, a divorcee, began logging into her daughter’s account after she fell ill with a seizure on New Year’s Day 2010.

Tragically tests revealed a brain tumour and although her daughter underwent surgery and chemotherapy within six months she had lost her speech and was unable to write or read more than a few words.

‘For the last four months of Becky’s life I used to log into her Facebook account for her,’ says her mother, who was always a friend with her daughter on Facebook, ‘she loved me to read out messages from all her friends.’

Since her death in December 2010, Mrs Palmer, from Kingswinford, West Midlands, continued to login to remove spam comments from the page.

‘I also gained a lot of comfort from reading all her old messages and conversations with friends before she got ill. When I was feeling desperately low, just logging into her page made me feel so much better. I could hear her voice through those conversations and remember how bubbly Becky was when she was alive.

Memorializing an account automatically gives privacy settings which means only confirmed friends can see the profile or locate it in a search.

Family and friends can still leave posts in remembrance but memorializing an account prevents anyone from logging into it.

Facebook requests that if someone is deceased then this information is reported to them by friends or family.

Verified next of kin can submit a special request for a deceased user’s account to be deleted. In this case Facebook will require the family member to provide documentation such as a death certificate.

‘At the same time I would sometimes change her profile photo and remove any spam that had been posted on her wall to keep her page tidy.’

However at the end of January Mrs Palmer went to log into the page as usual to find the log in details had been changed with a strange message that the page had been ‘memorialized’.

At the same time the page was made only visible to confirmed Facebook friends.

She says: ‘I felt there must be some mistake as a request for something such as this could only come from the next of kin and I hadn’t asked for it.’

However, when she contacted Facebook they replied in an email: ‘unfortunately for privacy reasons, we cannot make changes to the profile or provide login information for the account.’

She says: ‘I was angry and devastated as although people can post on the Wall, I can’t read any of her old conversations nor remove any spam. It means her page looks like an uncared for grave with weeds growing on it.

‘People who did not have a Facebook account or who weren’t friends on Facebook can now no longer even see the page even though they might want to leave a message of condolence on the Wall.’

A Facebook group has now been set up by 1500 protesters asking for the page to be reinstated as it was.

Mrs Palmer said: ‘Many are bereaved parents who’ve also had their child’s page ‘memorialized’ and like me they are incredibly upset. Others are desperately worried the same thing could happen to their loved-one’s Facebook page. ‘We just want Facebook to show some compassion.’

A Facebook spokesman said: ‘When an account is memorialised then certain profile sections and features are hidden from view to protect the privacy of the deceased.

‘For example, recent statuses are removed, groups the person has joined are hidden, and the person’s privacy settings are changed to “Only Friends” so that only his/her Friends can see the Profile.

‘This means that when we receive a report that a user is deceased we memorialize the account, which restricts profile and search privacy to friends only, but leaves the profile up so that friends and family can leave posts in remembrance.

‘However, we do honor requests from close family members to deactivate the account, which removes the profile and associated information from the site.’

Category: Recent Stories 2012, Sell my story to the Mirror, Stories sold to newspapersBy Alison Smith-SquireDecember 21, 2012
Share this post
Share with FacebookShare with TwitterShare with PinterestShare with LinkedInShare with WhatsApp