This is how Katy Bassett’s story about anorexia during pregnancy appeared in the DAILY MAIL. She is also pictured here with Dr Hilary Jones on ITV DAYBREAK.

The ‘pregorexic’ mother whose weight plummeted to FOUR STONE because she was so worried about getting fat during pregnancy. 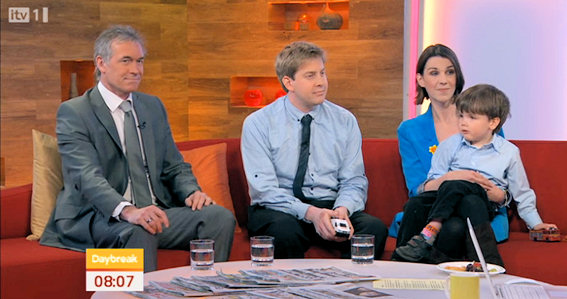 Having battled with teenage anorexia that doctors feared had left her infertile, Katy Bassett was delighted when she became pregnant at the age of 27.

From weighing three stone at her lowest point she had spent a decade overcoming the disease and with the help of her husband James had reached a healthy nine stone.

But the condition returned to haunt Mrs Bassett during pregnancy, and she became so ill that both she and unborn Evan almost died.

Terrified of getting fat, her weight plummeted to just four stone. It meant she had to be tube-fed to keep her and her unborn son alive.

Her dramatic weight loss meant Mrs Bassett had to be taken into hospital when just 11 weeks pregnant. Evan was born early at 30 weeks, but her ‘pregorexia’ left her too frail to care for him until he was 14 months old.

Mrs Bassett, now 30 and fully recovered, says: ‘Evan is a little miracle. Every day I just look at him and feel so grateful he’s healthy.

‘I feel so guilty because I know my dieting put Evan’s life in danger. But at the same time although realistically I knew that pregnancy would make me put on weight naturally, I felt revolted at the thought of getting bigger.

‘Now I am also thankful to him – because ironically although getting pregnant sparked my eating disorder – it is Evan who cured me. I knew I had to get well if I wanted to be a proper mum.’

Yet, the fact she even conceived Evan is incredible.

The 6ft tall mum, who is married to James, 31, an IT consultant, says: ‘Just before I began secondary school a friend of the family died. At the same time I was always much taller than everyone else. Although naturally slim, I felt huge.’

She says: ‘My mum begged me to eat and took me to see the GP. At my worst I weighed under three stone and was rushed to an eating disorders unit. I was just skin and bone. I was so poorly doctors gave me days to live.’

After seven months in the clinic and weighing six stone, Katy was finally allowed home. Over the next few years she kept her weight at around six stone.

But it wasn’t until Mrs Bassett was 18 – when she met husband James through friends while studying Health and Social care at College – that she recovered properly.

‘James always knew about my anorexia and for two years we were just friends,’ she recalls, ‘but I could always tell him anything and as time went on we just grew closer. Then one day we kissed.’

With his love and support, Mrs Bassett gradually gained weight and aged 27 and weighing a healthy 9st, she wed.

The anorexia seemed firmly in the past, never to return again.

But within three months of their wedding, she discovered she was pregnant.

‘It was a shock,’ she admits, ‘for years during my teens I hadn’t had any periods and when aged 23 they finally returned, doctors told me years of teenage anorexia had left me infertile.

‘But we were also delighted I was pregnant – we did want a family and James and I had planned to eventually adopt.’

‘I felt panicky about my tummy, my whole body, getting larger,’ she confesses, ‘and even when I didn’t have morning sickness, I couldn’t bring myself to eat anything other than salad or fruit.

‘I knew I had to eat more for the baby but I kidded myself and told James that my fruit diet was healthy enough. I didn’t dare confide my thoughts to anyone.’

Then at 11 weeks Mrs Bassett collapsed and she was rushed to hospital. A blood test revealed she and her unborn baby were literally starving to death and she was immediately put on a drip.

She recalls: ‘I was so frightened that I begged doctors to keep me in. I knew I couldn’t be trusted to eat properly at home.’

Thankfully scans revealed unborn Evan was fine. But although her husband and hospital staff desperately tried to encourage Mrs Bassett to eat with tempting foods, she could only take tiny nibbles and had to be tube fed to keep her and her unborn child alive.

And at 30 weeks, when Mrs Bassett developed a life-threatening infection in her feeding tube, doctors had no choice but to deliver baby Evan early via caesarean.

She barely glimpsed tiny 3Ib 10oz Evan before he was whisked into special care.

Yet over the next four weeks, whilst her tiny son thrived and put on weight, she was still unable to eat.

‘Now I can look at those photos of me after Evan was born and I’m shocked at how thin I was. But bizarrely I still felt fat and also after so long being tube-fed, my stomach had shrunk to the size of a tennis ball. Eating solids made me feel sick.’

Sadly, while Evan went home with his father, Mrs Bassett was too frail to leave. Finally, six weeks after the birth, she was transferred to The Priory.

It was to be almost a year before she was well enough to come home.

‘It was heartbreaking,” she recalls, ‘James was only allowed in once a week with Evan. James was a rock and fortunately my mum helped with Evan so he could work but it was incredibly hard for both of us. And every time I saw Evan I’d cry because he seemed to have grown so much. Devastatingly I missed seeing him crawl for the first time and his first steps.’

However, with intensive counselling, her health improved. She says: ‘The turning point came when James brought Evan to visit one day. I was changing his nappy and I suddenly felt upset that I wouldn’t be changing it again for a week.

‘In that instant I knew if I wanted to be a normal mum to Evan and a have a normal family life I had to get better. I made myself eat.’

When Evan was 14 months and weighing nine stone, his mother finally came home. ‘That was a very emotional moment,’ she says, ‘and from then on I was determined to make it up to Evan. We haven’t been apart since.’

Since then Mrs Bassett, who believes anorexia during pregnancy is often not recognised properly, has put on another half a stone and she and her husband are even planning another baby.

‘I often look at Evan and think he truly is a miracle baby. Then I think how lucky I am we are both still here.’