This is how Hayley Goleniowski’s story about her daughter Natty, who has Down’s Syndrome, appeared in THE SUN, BELLA and on the DAILY MAIL website…

‘It’s wonderful that others see what we see in her’: Parents share joy as five-year-old girl with Down’s Syndrome becomes child model.” 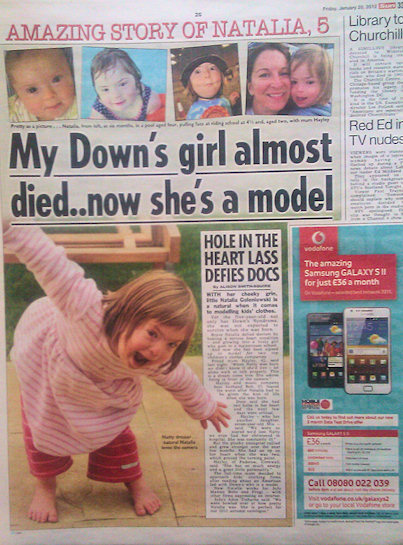 With a smile to melt the hardest heart, it’s not surprising little Natalia Goleniowski is taking the modelling world by storm.

But what is amazing is Natalia, 5 – who goes by the name of Natty – has Downs Syndrome.

When she was born she almost died. Her parents feared she might never learn to walk or talk properly. And aged two she battled with pneumonia and heart surgery.

Yet she has now been signed up to model the clothes for two prestigious children’s clothes companies.

And as well as wowing the modelling world – other companies are also queuing up to feature Natalia in their campaigns – she has started school and is learning to read.

‘When Natty was born we didn’t know if she would live, let alone if she would walk or talk properly. So this is a dream come true,’ said proud mum Hayley Goleniowski 42, last night. ‘But everywhere we go people stop me to say what a gorgeous little girl Natty is. And she just adores being in front of the camera.’ 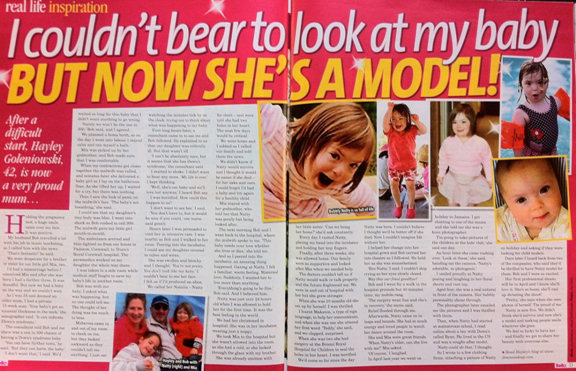 Babywear company JoJo Maman Bebe agrees. ‘When we saw Natalia’s photos we were bowled over by how pretty she was,’ said spokeswoman Alice Treharne, ‘and we think she will be perfect to model clothes for our 2012 Autumn catalogue.’

It’s a world away from the day Natalia – nicknamed Natty – was born.

Full-time mum Hayley and her music company boss husband, Bob, 57, from Padstow, Cornwall, who also have another daughter, Mia, 7, did not expect their second child would be born anything but healthy. 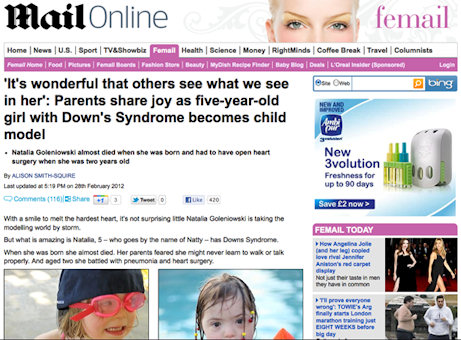 ‘Apart from some morning sickness, the pregnancy was totally normal,’ recalls Hayley, who has had five miscarriages, ‘a scan at three months did pick up an unusual thickness in Natty’s neck and we were told this could be a sign of Down’s. But the chance of Natty being Downs was given as 300 to one, which wasn’t enough to go for further tests such as an amnioscentesis.

‘And as everything else was fine, we didn’t give it any further thoughts.’

The couple even chose a home birth.

‘It was beautifully calm. I was in the bath and the midwives only arrived shortly before,’ says Mrs Goleniowski.

But as soon as 6Ib Natalia was born, alarm bells rang.

‘Natty was blue and not breathing. It was terrifying. We knew something was terribly wrong when the midwife went into full emergency mode and gave Natty the kiss of life.’

An ambulance was called and the pair were rushed to Truro’s Trelisk hospital.

There, as her mother lay in shock in a side room, medical staff desperately fought to save Natalia’s life.

It was four hours later before a consultant came in and gave the couple the news their daughter was not only critically ill – but had Downs Syndrome.

‘His actual words were a blur,’ says Mrs Goleniowski, ‘I was so stunned. Bob was fantastic – he immediately said, “well, she’s our baby and we’ll love her anyway,” and Mia adored her from the start. But I was numb.

‘It sounds awful now. But I didn’t even want to see her. It was such a nightmare – I just wanted to go home and forget I’d had a baby.’

Things didn’t improve when she got to see Natalia.

‘I just looked at her in an incubator and thought, “you’re not pretty. You don’t even look like my baby”. I felt as if I’d produced an alien.’

Doctors warned them Natalia had two holes in her heart and the next few days would be critical.

Says Mrs Goleniowski: ‘We even had Natty christened in hospital.’

That night the couple went home. But it was when they returned the next morning that mum and daughter began to bond.

‘By then I wanted her to live. I suddenly looked at her, lying there amongst bleeping tubes and felt a rush of love. I longed for her to live.’

Thankfully after three weeks the couple were able to bring Natalia home.

Gradually, however – and with intense physiotherapy to help strengthen her limbs – Natalia grew stronger.

‘I’ll never forget the day she first sat up by herself. She was ten months and that felt an amazing achievement.’

At a year Natalia stunned everyone when she spoke her first word – Teddy. And at twenty months she took her first wobbly steps.

Age two she underwent heart surgery to seal the holes in her heart. And from then on she came on leaps and bounds.

‘She had so much energy and developed such a little personality.’

Then when Natalia was four and the family were on holiday in Jamaica, they were approached by a photographer.

‘She was also on holiday and she asked if she could take some photos of Natty. She was amazed at how photogenic Natty was. Meanwhile, we couldn’t believe how much Natty adored posing for the camera. She loved it.’

At the same time Hayley read about a boy with Down’s Syndrome in the US who is now a sought after model.

‘I decided to write to a couple of clothing companies with a snap of Natty. I never thought anything would come of it. But incredibly both of them immediately emailed back inviting Natty to an audition.’

Kurt Jewson co-founder of children’s organic clothing company Frugi says: ‘We immediately felt Natty had model potential and are now looking forward to featuring her in our next catalogue and online.’

Since then her proud mum has received interest from several other organisations – including holiday companies – requesting to see Natalia for modelling work.

She says: ‘We are all so proud of Natty. She does shine and it’s wonderful that others see what we do in her.’