This is how Zoe Beresford’s story about her BBC1 Apprentice romance story ending appeared in the SUNDAY MIRROR. 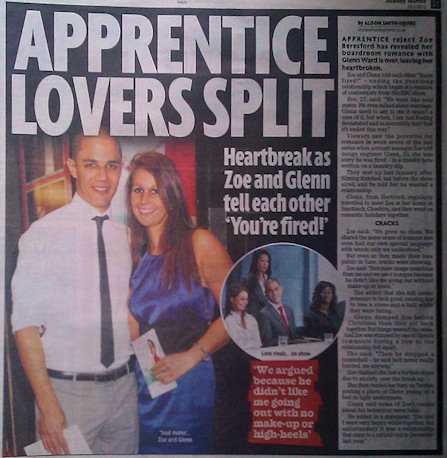 Apprentice reject Zoe Beresford has revealed her boardroom romance with Glenn Ward is over, leaving her heartbroken.

Zoe and Glenn told each other “You’re fired!” – ending the year-long relationship which began at a reunion of contestants from the BBC show.

Zoe, 27, said: “We were like soul mates. We even talked about marriage. Glenn used to say to me it wasn’t a case of if, but when. I am just feeling devastated and so incredibly hurt that it’s ended this way.”

Viewers saw the potential for romance in week seven of the last series when account manager Zoe told design engineer Glenn, 30, she was sorry he was fired – in a cheeky note written on a laundry slip.

They met last January after filming finished, but before it was shown, and he told her he wanted a relationship.

Glenn, from Hertford, regularly travelled to meet Zoe at her home in Sandbach, Cheshire, and they went on romantic holidays together.

Zoe said: “We grew so close. We shared the same sense of humour and even had our own special language with words only we understood.”

But even as they made their love public in June, cracks were showing.

Zoe said: “He’s more image conscious than me and we used to argue because he didn’t like me going out without make-up or heels.”

She added that she felt under pressure to look good, causing her to lose a stone and a half while they were dating. Glenn dumped Zoe before Christmas then they got back together. But things weren’t the same. And Zoe was stunned by one of Glenn’s comments during a row as the relationship fell apart.

She said: “Then he dropped a bombshell he said he’d never really fancied me anyway.”

Zoe claimed she lost a further stone due to anxiety over the break-up.

She then vented her fury on Twitter, posting a photo of Glenn posing on a bed in tight underpants.

Glenn said some of Zoe’s claims about his behaviour were false.

He added in a statement: “Zoe and I were very happy while together, but unfortunately it was a relationship that came to a natural end in December last year.”

Category: Recent Stories 2010, Sell my story to the Mirror, Stories sold to newspapersBy Alison Smith-SquireDecember 21, 2012
Tags: entrepreneur stories
Share this post
Share with FacebookShare with TwitterShare with PinterestShare with LinkedInShare with WhatsApp