Little Eleanor June is just 23 months old.  Mum Robyn has entered her into controversial US-style beauty pageant Miss Mini Princess UK.  In this two-page exclusive Robyn told why she believes it’s harmless and dad Andrew voices his concerns their daughter is growing up too fast… 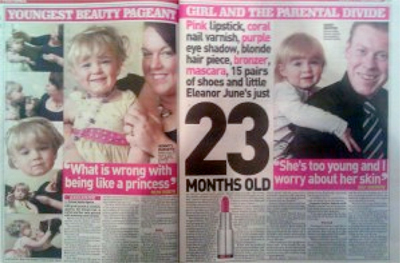 Her pink lipstick is carefully applied, her blonde hair is curled and her fingers are painted with matching pink nail vanish. Big blue eyes peep out of mascara and eye shadow while her skin is bronzed and glowing.

Yet Eleanor June Rees-Sutherland isn’t a teenager. In fact, she is just 23 months old – and about to enter Britain’s first US -style glitz and glamour beauty pageant for little girls.

This summer Eleanor June – thought to be the youngest ever beauty pageant entrant – will be one of 100 British girls aged up to 13 sashaying down a catwalk in Leicester in full make up.

Miss Mini Princess UK, which follows the format of the controversial American reality TV series Toddlers & Tiaras has already been slammed by critics as a paedo’s paradise.

And organisers admit they’ve received hate mail from campaigners upset by the thought of little girls parading in heels and bikini-based outfits.

But last night – and despite her partner Andrew’s worries Eleanor June is growing up too fast – doting mum Robyn Sutherland, 27, defended her decision to enter her daughter.

“I don’t see what all the fuss is about,” said Robyn a full-time mum, “There’s nothing wrong with it. Little girls have always loved to dress up in pretty clothes and wear make-up like their mummies do. What’s wrong about wanting to look like a little princess for the day?”

And she claims far from being a pushy mum, Eleanor June adores being glamorous.

“ Eleanor June might not yet be two but she knows her own mind and I couldn’t make her do something she didn’t want,” she says, “and I’m definitely not one of those awful mums who stands at the side of the stage shouting orders to her child.”

In fact, Robyn says given the choice, Eleanor June chooses to wear make up.

“She’s such a girly girl.  She already wears nail varnish every day. In fact, when we go out she’s always dragging me to the beauty counters where the nail varnishes are displayed and holding out her hands.

“She adores bright colours best – especially pink lipstick. She also loves having her hair brushed and styled with tongs. Luckily she is a natural blonde but for the pageant – to get her hair big Dolly Parton style – I might well add a little hair- piece.

“Then she’s had make up on lots of times before.  As soon as she could walk she was into exploring my make up bag. At first it was just something to plaster on the wall but now she’s always asking me if she can wear make up.

“She particularly enjoys a fun make-over. She will quite happily sit while I apply foundation, blusher, purple eye shadow and mascara. I use good brands on her – for example, for the pageant she will be wearing Clinique make up. I think it’s important from an early age that she learns to take care of her skin.

“And on the day of the pageant, if I think she looks a little pale I will apply a little bronzer to her skin.”

She says: “Eleanor June loves it as much as me. Of course some of the mums are shocking and a little disturbing but over all it looks fun.

“ And she always loves posing for the camera. She can blow me kisses – I taught her that – and she loves to pretend she’s dancing her way down the catwalk.”

The controversy over the American pageants – one mum was criticised after dressing her daughter, 4, as a prostitute in thigh-high PVC boots while another little girl performed a pole dance routine – hasn’t put Robyn off.

“I know some people say these pageants sexualise little girls but I don’t think there’s anything sexy about a child who is simply dressed like a little princess. And I don’t see how any pageant is a ‘paedo’s paradise’. After all, your child is far more likely to be looked at by a paedophile on a beach than at a pageant full of other mums and little girls.”

After having son Matthew, eight, Robyn, from Enderby, Leicestershire, admits she was delighted to give birth to a baby girl.

“Like many mums I’d always dreamed of having a little girl to dress up. Eleanor June is so cute – like a living doll – and I do love shopping for her,” she admits, “Eleanor June has got 20 dresses, two large chests of drawers bursting with clothes and around 15 pairs of shoes.

Nevertheless that amount is set to increase with the pageant because as well as entry and travel fees, girls are expected to pose in a variety of ‘wow’ outfits.

At the contest Eleanor June will be judged on her physical beauty, how good she looks in an eye-catching outfit, a talent such as singing or dancing and finally, her poise in elegant evening wear.

But Robyn, who has budgeted on spending around £400 on pageant clothes, says: “I’m enjoying thinking what Eleanor June can wear. Preparing the outfits is part of the joy of taking part.”  She has already splashed out £40 on a dress and plans to customise other clothes herself spending evenings sewing on sparkly beads.

But is such a pageant putting too much emphasis on a little girl’s looks?

Robyn thinks not. “It is only for a day,” she insists, “it’s going to be a wonderful experience and something that as a mum I am looking forward to sharing with my daughter.”

She confesses however, her love of dressing up Eleanor June has sometimes drawn a wedge between herself and partner Andrew, 28, a support worker.

“He doesn’t like Eleanor June wearing make up,” she says, “he thinks she should just be running around outside all the time. And when I wanted Eleanor June to have her ears pierced he put his foot down and said no – although I’ve now bought her some clip-ons.

“Then at first he didn’t like the idea of her going into the pageant either as he felt she was too young. But I explained no-one bats an eyelid about a dad playing football with his toddler son in the park so why should a mum helping her little girl be a Princess for the day be any different?”

Some people have also disapproved. “Close friends have been supportive. But some have said quite disapprovingly they would never put their daughter in for a beauty pageant.”

But Robyn has no doubt Eleanor June will thank her for the memory. “When I’m doing her hair, putting on her make up, or painting her nails we are spending quality time together,” she says, “and I think that’s being a good mum, not a bad one.

“And when I see her dressed up I can’t help but feel proud.”

What does Dad think?

Andrew Rees says: “Eleanor June had just turned one when I got home from work today to find Robyn had given her a little make-over. I was upset and asked her to take the make-up off because she was far too young.

My biggest concern is that Eleanor June is being encouraged to grow up too fast and doesn’t have any say in it. And then I think she doesn’t need all that make up. I worry it could harm her skin.

And I don’t think she needs make-up to be beautiful. I’m not a fan of heavy make-up anyway. I don’t think Robyn needs it and neither does Eleanor June who is stunningly pretty – if you have a natural beauty why not flaunt it? Why cover it up with make up?

I did put my foot down over the pierced ears. Quite apart from the fact little girls often pull their earrings out, I would rather Eleanor June makes the decision herself when she’s older whether or not to have her ears pierced.

Also I want her to have something to look forward to – she isn’t even two until July and there’s plenty of time for her to wear make up and earrings.

Eleanor June is very girly and she does love dressing up. So if it’s just occasionally I doubt it will do any harm – but ideally I just want her to grow up as naturally as possible.

I don’t like the American pageants as I feel they are too over the top. And I wouldn’t like it if Eleanor June was taking part in them all the time.

Ideally, Eleanor June is wearing leggings and a T shirt with a sensible pair of shoes, which enable her to play easily outside and climb trees if she wants to.

I do accept Eleanor June is a girly girl. She does hold out her hands to have her nails painted and she genuinely has an interest in make up and seems to prefer wearing dresses. She is always trying to put it on herself, although as a toddler she likes to explore everything.  And I do believe if she could speak for herself she would decide to do the pageant and that’s why I’m not making a big deal out of one day of dressing up. She is also not going to be wearing a revealing bikini-type outfit.  However, I wouldn’t want it to be pushed too much or for her to spend all of her time doing pageants or make up.

Eleanor June is different from her big brother Matthew who is a proper boy out playing football but I still just love to see her running around outside in a pair of leggings.”