WOMAN mag and THE SUN ON SUNDAY 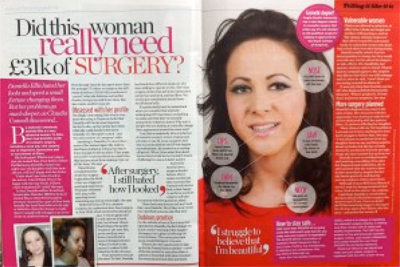 Daniella Ellis wanted to sell a story to raise awareness of Body Dysmorphic Disorder – this is a condition where the sufferer wrongly believes they are ugly.

Daniella’s story went into the Sun on Sunday first and was then bought by Woman magazine where it appeared on the front cover.

Daniella says: “When I had any concerns Alison was always there to reassure me!”

Sell your story: Have you suffered from BDD? Or have you spent a lot of money on cosmetic surgery? If so, you could sell your story too. Click here to fill in our form and see if your story could appear in a national newspaper or national magazine.

But incredibly the pretty mum of two has had £30,000 worth of cosmetic surgery on her face – because she believes she’s ugly.

To date she has undergone agonising jaw surgery, chin surgery, a nose job, liposuction and fillers to her lips.

But she still isn’t happy.  Despite spending hours under the knife, she plans spending a further £12,500 to perfect her looks on cheek implants, teeth veneers, eyelid surgery and further work on her nose.

Yet even then, Daniella admits she is unlikely to be happy with her looks – because she suffers from Body Dysmorphic Disorder, a medical condition, which leaves her hating the way she looks.

“If I could have a face transplant I would,” said Daniella last night, “although I’ve had so much surgery, I still look in the mirror and hate what I see. And when people tell me I look fine, I just don’t believe them.

“There have been some days I’ve felt so grotesque I can barely drag myself out of bed, let alone go out of the house. I just feel too ugly to walk down the street.

“And I worry how my obsession has affected my family. I’ve tried to keep it from them – telling them mummy’s had an operation on her nose to help her breath and wisdom teeth out when I had my jaw done.

“But recently my daughter told me she was fat and ugly too. She’s only eight and it broke my heart to hear her say that.”

Daniella, from Portsmouth, says she cannot remember a time when she didn’t feel ugly.

“Even when I was at primary school, I hated my looks,” she says, “I always felt I had chubby cheeks and was teased and called ‘chinless’ because I had no chin.

“By the time I got to secondary school I was so self-conscious about my small chin that my jaw ached where I used to make it jut out.

“And I disliked my profile so much that I only felt comfortable talking to people if I was facing them. My confidence also took a bashing because for years I had to wear a brace.”

Despite this, in her early twenties Daniella met Marc, 30, who works in IT – going on to have two children aged 8 and 4.

But it was after having her son that she suffered a spell of postnatal depression and her hatred of her face really kicked in.

“I became obsessed with my profile, spending hours examining my chin from every angle.”

Daniella became so upset that she was referred by her GP to a cosmetic surgeon.

“I was delighted when he said that as my teeth were out of alignment I qualified for jaw surgery on the NHS, “ she recalls, “Marc didn’t want me to have it done – he was worried something could go wrong and anyway he said he loved me as I was. But I was determined to go ahead.”

In July 2009 she underwent the harrowing four-hour surgery, which involved breaking her jaw and inserting clamps inside her mouth to keep her new jaw in place.

“When I came round I was in agony and could only eat a liquid diet,” she says, “but despite the pain, I was euphoric that at last I’d have the profile I always wanted.”

But as the swelling went down, Daniella felt a wave of disappointment.

“I thought this operation would give me the face I wanted,” she said, “but when I looked in the mirror I realised I still hated my looks.”

She was so distraught that in June 2010 surgeons agreed to do a chin operation. She says: “My chin looked flat and I wanted it to be more rounded.”

However, almost as soon as she came round from the anaesthetic, she hated her new chin.

“It looked massive and it still does,” she says. And by then she had begun to notice her nose wasn’t right either.

“I’d read the most beautiful faces are symmetrical and become obsessed with measuring my face.  Terrifyingly, I spent hours with a tape measure, calculating the distance between my eyes, measuring every part.

“I wanted to work out why I was still so ugly.  It affected my life so much I didn’t want to go out.

“Marc was horrified and tried to tell me I was lovely. It was then I decided my nose was bulbous on the end and began researching nose jobs.”

She recalls: “Even the surgeon said my nose was fine but eventually he agreed to take out the little bump on the bridge.”

When she came round from the op, she was thrilled with her new nose. But as it healed, the old feelings of self-hatred returned.

“I spotted a slight curve in my nose when I wanted a straight one,” she says, “and I was upset the tip was too high. Marc said it was a pretty nose but I was so devastated wanted to cut my face off.”

Daniella sought a second opinion on her nose from another surgeon.

“He said it was one of the best nose jobs he’d seen,” she says, “but I didn’t agree. I felt uglier than ever.”

Over the next few months Daniella decided her neck and chin was too fat. And in April 2011 she splashed out £4000 savings on liposuction to her face and neck. It caused huge bruising and afterwards Daniella was still not satisfied.

She admits: “It’s caused rows between Marc and I. He constantly tells me he loves me as I am. And my sister has said she cannot understand why I want to keep putting myself through all this surgery.

“But although the operations were so painful, and I feel so guilty for putting everyone through such a lot of strain, I felt I had to go ahead.”

Then in the summer last year matters came to a head.

Says Daniella: “I’d gone back to complain again to the surgeon who did my chin that I was still unhappy with it, when he turned round to me and said he believed I had a problem. He said, ‘I don’t think you are seeing yourself as others do.’”

Daniella made an appointment to see her GP, who diagnosed her with Body Dysmophic Disorder and prescribed anti-depressants.

“I’d never heard of it,” she says, “but when I googled it I had every symptom.”

Daniella is currently waiting for counselling but fears she will never be cured.

“Marc was upset,” she says, “but at least it wasn’t major surgery costing thousands again.”

She adds: “As soon as I began taking the anti-depressants, I began to see that I did have a problem. But although a part of me can see that I don’t need all this surgery, another part of me longs to have more.

“But I’m addicted to surgery and am already planning the next procedures I want to have. For example, I would like to have further work on my nose and chin. I still feel my cheekbones could be more defined so would like some surgery on them. I’d like to have veneers on my teeth and an eyelift.

“I know even if I eventually have all this surgery done, it is unlikely to make me happier. But it doesn’t stop me wanting it.

“And although I know BDD is an illness, it doesn’t stop the disappointment I still feel when I look in the mirror.”

Daniella, who is on the waiting list for counselling, is hoping that counselling might hold the key to turning her life around.

“I just long to feel content about myself and live a normal life.

“But I don’t know if that will ever be possible.”

·      Body Dysmorphic Syndrome affects 1% of the population, with men and women equally affected.

·      People suffering from BDD are often thought of as vain. But in fact it is the opposite and they truly believe they are hideously ugly and disgusting.

·      The condition usually begins during the teen years and can be triggered by teasing.

·      Sufferers constantly seek treatment from cosmetic surgeons but are rarely satisfied even after successful surgery.

·      The illness can be so severe that sufferers eventually become a recluse. One in four sufferers will attempt suicide.