Story in the SUNDAY MIRROR 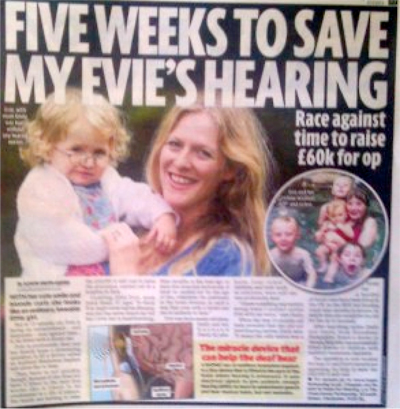 Evie Small’s parents desperately needed national publicity fast to raise money for an operation to help their profoundly deaf daughter to hear. We sold their story to a national newspaper who championed their cause and successfully launched their fund.

Mum Emily said: “We were delighted with the wonderful story in the Sunday Mirror. Incredibly within hours of publication, one generous reader had donated £1000 and the donations have come in ever since.”

Are you trying to raise money for charity? If you have a story to sell for charity then contact us to see how we can help. Click here to fill in our form.

With her cute smile and blonde curls she looks like an ordinary, loveable little girl.

But at 19 months old, Evie is facing an extraordinary – and desperate – race against time… to be fitted with a bionic ear.

Evie is profoundly dea­f and her family hope a pioneering operation to fit a device called an Auditory Brainstem Implant will allow her to hear.

They have to act quickly, though, because if she does not have it fitted in the next five weeks she is likely to be ­condemned to a life of silence.

Her family are battling to raise the £60,000 it will cost to have the procedure carried out at a hospital in Italy.

Cuddling little Evie, mum Emily Small, 37, says: “To think Evie might never call me Mummy and she has never heard me tell her I love her is heartbreaking.

“Nine months is the best age to have this done but doctors say it must be carried out by the age of two, otherwise the pathways in the brain develop in such a way that even with a bionic ear she is ­unlikely to hear.”

Evie was three weeks old when Emily and her husband ­David, 42, who have four other ­children and both work as ­solicitors, were told she was profoundly deaf.

“I knew something was terribly wrong when I couldn’t soothe Evie with my voice,” says ­Emily.

When she was 16 months old tests revealed that she did not have hearing nerves. Emily says: “It meant the only option was a ­bionic ear.”

A handful of bionic ears have been fitted in the UK on the NHS but ­funding could take months to secure, by which time she would be too old for the op to succeed.

After searching online Emily and David, from Horndean, Hampshire, found a ­doctor in Verona, Italy, who has ­successfully fitted dozens of children with auditory brainstem implants.

The operation is now booked for June 21 and Evie’s parents are appealing for help to raise the £60,000 it will cost.

* To donate go to hopeforhearing.co.uk

Cheques can be sent to:

Category: Recent Stories 2012, Sell my story to the Mirror, Stories sold to newspapersBy Alison Smith-SquireDecember 21, 2012
Tags: Health stories
Share this post
Share with FacebookShare with TwitterShare with PinterestShare with LinkedInShare with WhatsApp