50 years after the first boob job, we investigate the stigma that still surrounds Britain’s most popular cosmetic surgery 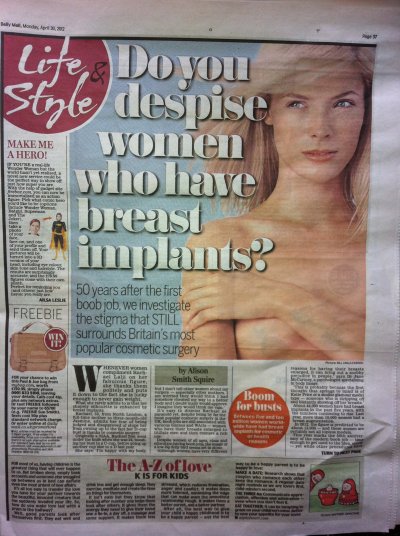 Whenever women compliment Rachael Lalji on her fabulous figure, she thanks them politely and puts it down to the fact she is lucky enough to never gain weight. What she rarely admits to is that her shapely silhouette is enhanced by breast implants.

Rachael, 33, from North London, a full-time mother to three-month-old Jasmine, admits her fear of being judged and disapproved of stops her from owning up to the fact her D-cup bust is thanks to cosmetic surgery.

Originally a 32AA, Rachael first went under the knife when she was 24, boosting her bust to a C-cup, before going up another cup size to a D last year.

She says: ‘I’m happy with my body, but I don’t tell other women about my surgery — especially other mothers. I am worried they would think I had somehow cheated my way to a better body and I doubt many would approve. I imagine they would think me vain.’

It’s easy to dismiss Rachael as paranoid yet, despite being by far the most popular cosmetic surgery in the UK, boob jobs are still associated with vacuous bimbos and WAGs — women who have their breasts enlarged to titillate men and then ensnare a rich one.

Despite women of all ages, class and education having boob jobs, the image of a low-IQ dolly bird seems set in stone.

‘Although women have very different reasons for having their breasts enlarged, it can bring out a snobby prejudice in people,’ says Dr Jane McCartney, a psychologist specialising in body image.

‘This is probably because the first thought that springs to mind is of Katie Price or a similar glamour model type — someone who is stripping off and blatantly showing off her breasts.’

About 44,000 women have had breast implants in the past five years, with the numbers continuing to rise. Last year, more than 10,000 women had a breast augmentation. In 2012, the figure is predicted to be about 12,000 — and these women are certainly not all topless models.

‘People have made spiteful comments. Most are quick to let me know they’d never “disfigure” themselves’

This year marks the 50th anniversary of the modern boob job — time enough to get used to the idea, surely — yet while other procedures have become accepted, implants remain the one surgery that still carries  a stigma.

Women such as Jane Fonda, Anne Robinson and news anchor Kay Burley who have all spoken publicly about their facelifts, and have been lauded for their bravery and honesty in doing so. So why are women who have breast surgery not treated the same way?

The answer must surely be that in Western culture breasts are viewed as symbols of femininity and sexuality, so it follows that enlarging them can only be for the benefit of the opposite sex.

Feminist author Naomi Wolf even went as far as describing boob jobs as ‘sexual mutilation’ in her book The Beauty Myth.

However, the rather more mundane reality is that the majority of women who have implants do so to boost their confidence, just like those having facelifts and other cosmetic procedures, and not, as widely thought, to appeal to men.

According to BAAPS (the British Association of Aesthetic Plastic Surgeons), women having implants chiefly fall into two categories — young women with smaller breasts who want to be bigger, and women in their 30s and 40s who have had two or three children and blame breastfeeding for their softer, saggier boobs.

In all cases, ‘increasing confidence’ is given as the number one reason for the surgery.

Kristy Taylor, 32, who runs a dating website, had surgery because two pregnancies and months of breastfeeding had left her with sagging breasts.

Kristy, who lives in South London with husband Michael, 28, and sons Thomas, 12, and John, 11, says: ‘After breastfeeding, all the firmness had disappeared and I wanted to get that back. In the end, I went from a 34B to a 34D and it has made me so much happier with my body.

‘People have made some spiteful and hurtful comments, though — especially women who seem to feel they can judge me and say anything.

‘Most are quick to let me know they would never dream of “disfiguring” themselves with surgery. It upsets me, but I put it down to jealousy.’

As in Kristy’s case, Yvette Ashdown, 31, a maternity care assistant from Bristol, wanted to have her breasts done after having her children Chloe, 11, and Charlie, seven.  But she was made to feel so guilty and selfish by members of her family — including by her husband Ryan, 36 — that she bowed to pressure and cancelled the operation.

Yvette says: ‘Ryan and my parents were so upset when I first mentioned having a boob job that I cancelled it. I was desperately unhappy with my body, though. Before having children, both of whom I breastfed, I measured a 34B — but after having them, I was left with a wrinkly A-cup.’

U nable to live with her breasts the way they were, Yvette re-scheduled her surgery two years later, and again faced criticism from her loved ones.

‘Ryan and my parents were all worried something would go wrong,’ she says. ‘They’d say things like: “What if you die under the anaesthetic?” The night before, Ryan tried to dissuade me from going ahead, although he was supportive in the end, coming with me to hospital and caring for the children.

‘I stood my ground and went to a 34DD and have no regrets. Ryan and my parents can see now that  I am much more confident  and content.’

Even women who have breast reconstruction after cancer aren’t immune to feelings of guilt or worrying over how they will  be viewed.

Janice Day, 54, a divorced writer from Surrey, had implants 15 years ago following a mastectomy. She now has a pair of pert 36G breasts, but is always quick to let people know she had them due to illness not vanity.

Janice says: ‘I had a single mastectomy but opted for implants in both breasts so they were completely even. If I tell people I’ve had breast augmentation I always say I had cancer and it was for medical reasons.

‘Having a boob job is something I’d never have chosen because I don’t agree with unnecessary surgery or like the thought of having something fake inside me.

‘I suppose I also worry that if I said I’d just had a boob job it might sound vain. I’m single, but if I meet someone new, the breast issue is always on my mind. Telling them I’ve had cancer is the biggest hurdle, but I worry that admitting to implants will put men off. I can’t help but worry as I feel men don’t like false boobs.’

The message seems to be clear: you can’t be taken seriously if you have had your breasts artificially enhanced — a message that wasn’t lost on Victoria Beckham.

After moving into the world of fashion — perhaps one of the most bitchy and judgmental industries — the first thing she did was have her ‘torpedo bazooka’-style implants removed.

Breast implants and our attitudes towards them have been thrust into the spotlight with the PIP scandal. The French-manufactured implants, made from an industrial silicone most commonly found in mattresses, were found to be dangerous and prone to leaking.

Women with PIP implants complained of symptoms as varied as hair loss and insomnia through to migraines and severe back pain.

This month, Susan Grieve, 41, told the Mail she is convinced her PIP implants are to blame for the cancer that has ravaged her body.

Yet even though 47,000 British women are affected by the PIP scandal and live with the terror of wondering whether their cosmetic surgery could make them ill — or even take their life — it seems they can expect little sympathy. ‘Serves you right’ seems to be prevailing attitude.

When the issue of whether the NHS should pick up the bill for women having PIP implants removed was raised, online forums went into a meltdown of outrage.

‘I don’t pay tax so that vain women can have free surgery,’ wrote one online poster.

‘They wanted to look like bimbos so they need to pay when it goes wrong,’ said another.

Dr Jane McCartney says: ‘Unfortunately, some women might get a tinge of satisfaction if a friend’s boob job goes wrong — it is engrained in the British psyche to cut down someone who appears too vain.’

It’s an attitude that divorcee Alison Chapman, 45, from Southampton, found herself on the receiving end of after her boob job went wrong — even her own mother seemed to think she’d brought it upon herself.

She says: ‘When my marriage ended, I decided to treat myself to breast surgery. After having children they’d drooped and I wanted to be a firm 38DD again. Unfortunately, the surgeon put the wrong-sized implant in one breast.

‘I returned for more surgery to correct it but then got an infection that left me with terrible scarring. It was only then I realised what strong views people hold over breast surgery. I even found it difficult to get a lawyer to represent me in my fight for compensation.

‘Some friends were supportive but others were unforgiveably judgemental, saying: “Well, why did you have it done?”

‘Even my mother had no sympathy. She felt it was an unnecessary surgery I should never have had in the  first place.

‘Thankfully, I won compensation and have since had my breasts put right, but the whole episode certainly opened my eyes to who my true friends are.’

It’s not unreasonable to assume that if Alison or the 47,000 women with PIP implants were victims of any other sort of surgery that had gone wrong, then they could have expected far more sympathy.

But, as these stories show, despite reaching their 50th year, boob jobs remain the cosmetic surgery that’s least likely to win you many friends or supporters.