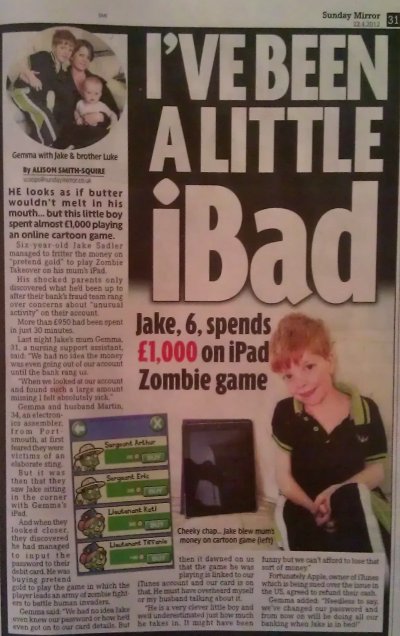 He looks as if butter wouldn’t melt in his mouth… but this little boy spent almost £1,000 playing an online cartoon game.

Six-year-old Jake Sadler ­managed to fritter the money on “pretend gold” to play Zombie Takeover on his mum’s iPad.

His shocked parents only ­discovered what he’d been up to after their bank’s fraud team rang over concerns about “unusual activity” on their ­account.

Last night Jake’s mum Gemma, 31, a nursing support assistant, said: “We had no idea the money was even going out of our account until the bank rang us.

“When we looked at our account and found such a large amount missing I felt absolutely sick.”

Gemma and husband ­Martin, 34, an electronics ­assembler, from Portsmouth, at first feared they were victims of an elaborate sting.

But it was then that they saw Jake ­sitting in the corner with ­Gemma’s iPad.

And when they looked closer, they discovered he had managed to input the ­password to their debit card. He was buying pretend gold to play the game in which the player leads an army of zombie fighters to battle human invaders.

Gemma said: “We had no idea Jake even knew our password or how he’d even got on to our card details. But then it dawned on us that the game he was playing is linked to our iTunes account and our card is on that. He must have overheard myself or my husband talking about it.

“He is a very clever little boy and we’d underestimated just how much he takes in. It might have been funny but we can’t afford to lose that sort of money.”

Fortunately Apple, owner of iTunes which is being sued over the issue in the US, agreed to ­refund their cash.

Gemma added: “Needless to say, we’ve changed our password and from now on will be doing all our banking when Jake is in bed!”