The fairest of them all…

White-skinned couple Aslam Parvez, 55, and wife Shameem, 56, are the eldest of the 16-strong clan from Coventry. 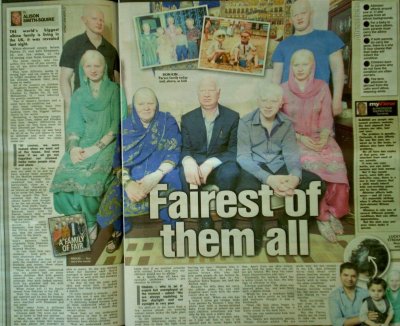 The Asian family, who live within five miles of one another, are all are white-skinned with white hair.

They have difficulty seeing in strong light and are unable to sit in bright sunshine for more than ten minutes because their skin burns so easily.

Two of Aslam’s brothers and a sister have the condition too.

His three siblings have five albino children between them — making them the biggest albino family in the world.

Revealing a fascinating insight into their lives, eldest son Ghulam told how, despite difficulties as they grew up, they have never let their albinism get them down.

He said: “Growing up was hard for all of us. No one wants to look so different and with our pale skins and white hair we really stood out.

“Of course, we were teased when we went out of the house. And even now if we all go out together our unusual looks make people stop and stare.

“But people in the local area are used to us and we have always been accepted by the Muslim community.

“Perhaps having this condition has made us particularly close as a family. But thankfully, as there’s so many of us, we’ve never felt lonely.”

This month The Sun revealed that the largest albino family was thought to be the ten-strong Pullan family, from Delhi, India.

But now Guinness World Records have told the Parvez family they would be verifying that they had the record.

Incredibly, until Aslam, a retired mechanic, was born in the Fifties no one had any idea the condition existed in the family.

Ghulam said: “My dad’s parents, both originally from Pakistan, were normal brown-skinned Muslims.

“In fact, their first two children — both girls — were absolutely fine.

“Then my dad was born with the condition and out of nine brothers and sisters, three others were also born as albinos.

“Then no one really understood why his parents had so many albino children.

“But with genetic research we now know that, although they both looked normal, both my grandad and his wife carried the albino gene.”

When Aslam was 11 his family moved from Pakistan to the UK.

Then the time came for him to get married and he and his brother, who both had arranged marriages, were matched with Shameem and her sister.

They came from a different family but also both had albinism.

Ghulam said: “My mum and dad felt so lucky to find one another.

“Mum has said she did worry when she was young that because she was albino she wouldn’t be able to marry.

“So she was thrilled when her parents said they’d managed to match not only her but her sister as well with two brothers who were also albino.

“As they all had the same pale skin and white hair, it seemed obvious that they fitted together as a match.

“It truly seemed a miracle — and when they met it was like looking at a mirror image of one another.

“It definitely helped because both of them understood what it was like to be albino and it meant they weren’t alone.

“Back then, no one understood the genetics or that if an albino married an albino, they would definitely have albino children.

“Now we understand more and knew that if we married someone with normal brown skin then our children would not be albino.”

As a family they all have the eyesight problems which are common in albinos.

Ghulam – who is an IT expert but unemployed at the moment – added: “We are always squinting in the daylight and our eyesight is very poor.

“It’s difficult to see more than a few metres ahead, yet wearing contact lenses makes the light glare even worse.

“In the summer we can wear sunglasses. Otherwise, many of us wear hats to keep the light from hurting our eyes.”

Ghulam, who is married to Najma, 33, who has normal brown skin, also told how some people do not believe he is the biological dad to his daughter Sidra Begum, ten, and son Ahmed, eight.

Because his wife does not carry the albino gene, his son and daughter were born with the same colour skin as hers.

Ghulam said: “When my son was a baby I often got strange looks from passers-by because I was this white man with a brown-skinned baby.

“Even now at school my son says children sometimes ask him why he has such a white dad.

“It’s quite hard to explain why, so I just tell him to say I am special and he seems happy with that.

“Apart from our skin colour, we do look the same. You can tell we are related. We have the same facial characteristics and ears.”

Unusually, his nephew Asad has a white streak in his hair, the only sign of albinism in him.

Ghulam explained: “My sister was amazed when her son was born with a white streak.

“When he was a newborn baby he had a white patch on his head and everyone thought it was a birthmark.

“Then the hair there began to grow white and he now has a white streak in his dark hair.

“No one can understand how that has happened.”

The family are definitely special, though.

Ghulam added: “We are quite sure we are unique in the UK. And although we’ve read about other albino families abroad, we haven’t even heard of any family with so many with the same condition.”

Until the Pullan and Parvez families turned up, the world record was shared by two families.

Both six-strong, one lives in the US and the other in Canada.

But the Parvez family are on track to take the world record now.

Albinism affects around one in 17,000 people from all ethnic backgrounds.

For a baby to be born albino, both parents must carry the albino gene.

If both parents do carry the gene, there is a one in four chance that their baby will inherit the condition.

Children born to parents who do not have the condition are often carriers.

The term albinism is derived from the Latin word albus, meaning white.

ALBINOS are people who cannot produce melanin, the dark pigment that colours our skin, hair and eyes.

The problem is genetic. Curiously, it also affects the way the eyes are wired up to the brain, so albinos also have vision problems.

We all have two copies of that gene, one inherited from each of our parents.

If even one copy works, you can make melanin and look normal.

But if two people marry, each with one defective copy, there is a one in four chance that a child would inherit both non-working genes and be born albino.

Albinism affects both sexes – and all races.

Albinism is only one of several different genetic conditions that can affect pigmentation.

But the pink eyes and poor vision make it special.