This is how Anna and Emily Furniss’ story appeared in THE SUN newspaper. It is their second deal as we have already placed their story in CLOSER magazine…

See the story in Closer mag. 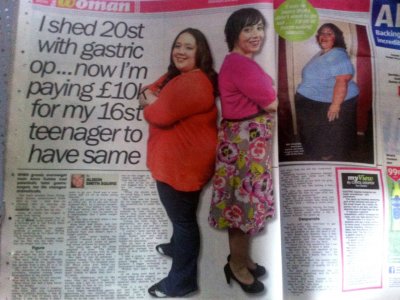 The bank worker from Chingford, Essex, plummeted from 28st to 11st — and was so pleased she is saving up £10,000 to pay for her DAUGHTER to have the op too.

Anna, 40, thinks the surgery is easier than dieting.

Although the procedure has a risk ofDEATH, Anna wants it to be a birthday gift to 16st Emily when she turns 18 next May.

Anna, who believes her weight problem is genetic, says: “Seeing Emily suffering as I’ve done all my life is heartbreaking.

“Diets don’t work because she’s like me. She eats the right things but the weight still piles on.”

And 5ft 1in Emily, who is the same weight her mum was at her age, can’t wait to have the op.

The operation, an extreme gastric procedure, involves cutting away three-quarters of the stomach.

But Emily says: “I’m not worried. Mum will be there to help me.”

Mum Anna has had a long battle with her weight.

She says: “Aged nine I weighed nine stone and was constantly teased at school because I was so big.

“I was so heavy I didn’t want to go out. Food was a comforter and I’d sit at home eating biscuits.”

Anna left school at 16 to take up an office job. At 21 she met future husband Paul, 42, a factory worker.

She says: “Just before I met Paul I’d been taking diet pills and lost three stone but I was so content in a relationship that I piled weight back on.

Anna soon had Emily, and two years later gave birth to Olivia, now 14 — who she says takes after husband Paul and doesn’t have a weight problem.

Anna says: “After having the children I worked at a call centre. I relied on quick meals of pasta and bread followed by biscuits.”

Ten years ago, aged 30, Anna weighed 31 stone. The family couldn’t go on foreign hols as she was too fat to fit in a plane seat.

She says: “I was so ashamed. I stopped taking the kids to school. Instead my sister Pia dropped them off.

“When other kids asked my daughters if my sister was their mum, they said yes. They didn’t want friends to know they had a fat mum.

“I was devastated and at the same time my health began to worsen and I got ill with asthma and hernias. It was at this point I knew I had to lose weight.”

Often, as in her case, it is carried out in two stages to reduce stomach size then cut fat intake.

“I went to see my GP and begged him to refer me for surgery,” says Anna.

“When the doctor said he could help, I burst into tears of relief.”

But Anna was too heavy for the surgery even though she qualified for it under the NHS.

Weighing 31 stone, she was ordered to lose three stone before they could operate and was warned there was a risk she could die on the operating table.

“Losing the three stone seemed impossible,” she says. “But I was put on a liquid diet and lost more than four stones in six weeks.”

“I couldn’t have carried on with it though, I got a date for surgery eight weeks later and was so hungry I put a stone back on before the operation.”

The op was a success, although afterwards Anna could only manage two gulps of soup before she was full.

“I lost a stone a month,” she says. “Within six months people began to comment. I felt fantastic. I began swimming and discovered I enjoyed exercise.

At 34, Anna went back for the second stage of the surgery.

“This took away some of my intestine that absorbs fat,” she says “Now if I eat 75 per cent fat, only ten per cent is absorbed. I lost a further nine stone — and since then my life has completely changed.”

Shopping became a pleasure instead of an ordeal and, Anna says: “My social life took off too.

“Finally I could go out with the girls and know I looked fine.

“Paul said it was like having a new wife.

“At first my new-found confidence was difficult for him to cope with, but he has been so supportive.”

Aged 36, and with loose skin left from the drastic weight loss, Anna had a tummy tuck — losing a stone overnight.

Now, despite finally having the body of her dreams, Anna is desperately worried Emily could suffer a life of misery without the same op.

“Emily will only continue to get bigger, as I did,” she says.

“I want her to have the surgery as soon as possible so she can have a life.

“Our meals are healthy but I feel guilty about Emily because she has a big appetite and has inherited my genes so I feel like it’s my fault.

“I know it’s a big operation but I am desperate for her to have it done.

“My mum is the only member of the family to think surgery isn’t the best option but I know that it’s the most effective way.”

Emily cannot have the surgery until she is 18 and she is currently not heavy enough to qualify for it on the NHS.

But Anna is convinced that the irreversible operation will be worth every penny it costs.

“Being slim has turned my life around and I want Emily to feel the same as I do,” she says.

The usual op involves removing part of the stomach and part of the small bowel. As a result, the person has to eat less, and also absorbs less of what they do eat.

It requires a general anaesthetic, which increases the risks, and can take several hours.

Occasionally it is done via keyhole cuts but a large incision is more usual. Complications can include bleeding, infections and deep vein thrombosis (DVT or blood clot).

The risk of dying from a gastric bypass op is said to be around one in 400.

A gastric bypass is for life. You can never eat big meals again.

Smaller meals may make you feel weak for a while, until you get used to your new way of eating.

After the op, the gut no longer absorbs food properly so there’s a continuing risk of vitamin, mineral and sometimes protein deficiency.

Under-18s rarely have this type of surgery. They are still growing and need proper nourishment to avoid running into trouble.

People of any age should try EVERY other proper weight-loss method available before considering going under the knife.

Weightloss story to sell? To sell your losing weight story, fill in the ‘sell my story’ form to the right of this page.