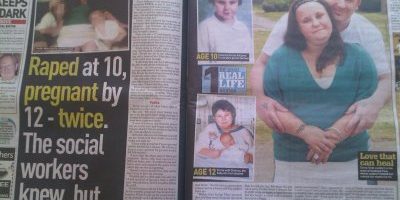 Terrie’s story appeared in the SUNDAY PEOPLE newspaper and PICK ME UP magazine before being printed as a novel.

Do you want to sell your story and have it turned into a book? Find out how here: How to get a book deal and Sell My Novel

Victim raped at 10 tells of abuse in care… Terrie O’Brian’s real life story appeared in the Sunday People newspaper and Pick Me Up magazine in 2010. It was then picked up by a book publisher who saw the articles and her paperback was published in July 2012  … 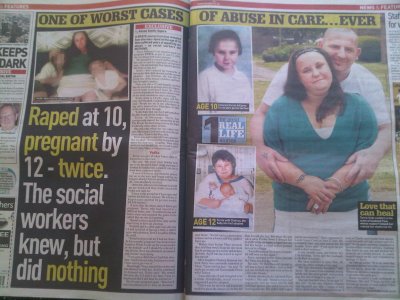 A BRAVE young mum has revealed how she was raped at the age of 10 then suffered years of appalling sex abuse as social workers did NOTHING.

Terrie O’Brian’s vile attacker made her pregnant TWICE, at just 11 and 12, while she was living with foster parents.

She pleaded for council staff in charge of her case to end the nightmare of repeated rape but astonishingly they failed to {prevent the brute seeing her.

Terrie who endured the heartache of having her first child aborted and the second adopted was 16 before she was able to break free of the abusers clutches and have him brought to justice.

Only now she is 25 and happily married has she received an apology and a five-figure, out-of-court settlement from the social services department that let her down in one of the most scandalous cases of its type.

Terrie, mum to two children, fought back tears as she said: People see me at the schoolgate as any other mum of two. They have no idea of the hell I went through.

I only hope that one day I will somehow be able to put all this behind me. 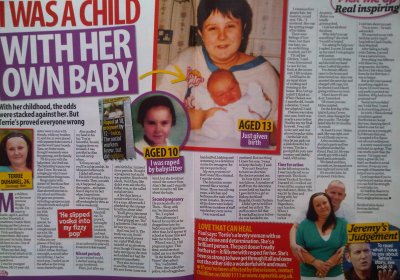 Terrie has courageously waived her anonymity to tell The People her harrowing story in the hope it will help other abuse victims.

She was nine when she was taken into care. Her mum had suffered a breakdown after Terries dad died.

Terrie was sent to stay with foster parents. She recalled: I was terribly homesick and upset but they were uncaring. They often went out and would take me round to their friend Alan Vince to babysit for me.

She said: My foster mum took me to his flat and I didn’t think anything of it when he handed me a glass of cola but it must have contained spirits.

I soon felt woozy and when he pinned me on to the sofa and began pulling my trousers down, I felt too drunk to fight him off. I was absolutely terrified.

After that, whenever he babysat he would get me drunk with fizzy drinks laced with vodka and rape me.

I knew it was wrong but if I got upset and said no, he just did it anyway. He told me to keep it secret and that Id get into trouble if I told anyone.

A year after the abuse started Terrie got pregnant. Terrie, who had moved to a different home, said: I confided in my new foster mum and expected the police to be called. But no one did anything.

Social services decided the only option was for me to have an abortion.

At first I said no. Although I was still only 11 and terrified of having a baby, I didn’t agree with abortion. I felt it would be killing the child.

Social services told me I had no choice. At four months pregnant I was booked into hospital. When I woke up the social worker at my bedside said I should be relieved it was all over. But I was absolutely devastated and couldn’t stop crying.

I was just a child when I had that abortion. I had seen my baby kicking on a scan. I have never got over it.

Shockingly, Vince tracked her down and was allowed to visit her. And he continued to demand sex. Terrie said: He would threaten me if I didn’t see him. I was so frightened that I did what he told me to.

She became pregnant again. This time I was determined not to have an abortion, said Terrie. Social services pressed me to have one but a doctor said they couldn’t force me.

Rather than having Vince arrested, they said they would keep me safe from him by putting me in a secure unit to have the baby. And I was too scared to report him myself.

After her daughter was born Terrie was constantly reminded of Vince. I just saw his face, she said. It made me so sick and I just couldn’t  bond with my baby.

I was still only 13 and struggled to be a mum. Eventually, social services suggested I got her adopted.

I felt it was for the best and hoped she would be given the chance of a better life than I could give her. But when she was taken away I broke down. I dressed her in a little white cardigan and gave her one last kiss before a social worker pushed her out in a buggy.

I was devastated. Even now I wonder if I will ever see her again.

Terrie returned to her foster parents but Vince tracked her down.

She said: By then I was old enough to tell him to leave me alone. And as soon as I was 16 I left care and went to live in a flat with friends.

Shortly afterwards she reported Vince to police. She said: Social services had repeatedly told me there was no real evidence against him and it was just my word against his. The police didnt agree and he was arrested. Vince appeared at Luton Crown Court on June 21 2001. He admitted rape and was jailed for 30 months. Terrie said: I was upset he got such a short sentence.

A few months later, just before her 17th birthday, Terrie met her husband-to-be at a party.

She soon confided to him about the awful ordeals of her past.

He was absolutely horrified, said Terrie. He comes from a normal, loving family and, like most people, had no idea that this sort of thing is going on.

The pair married when Terrie was 18. She said: As my own children got older I began to feel bitter about what had happened to me. I look at Charlie and wonder how anyone could blatantly not take proper care of a girl. Terrie made a formal complaint to social services, claiming they failed to care for and protect her properly as a young person. A county council report on the case contained an apology to Terrie.

An official wrote: It is my view that all parties did the best they could to care for you safely, given the circumstances. Where we did fail to support you properly, I unreservedly apologise.

Terrie accepted a cash settlement in February. She said: I hope my story will encourage people to seek justice if they have suffered as I have.

Do you have a story of abuse to sell? If so fill in the quick submission form to the right and we will get back to you.