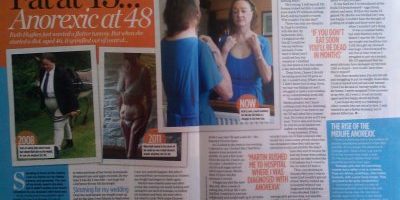 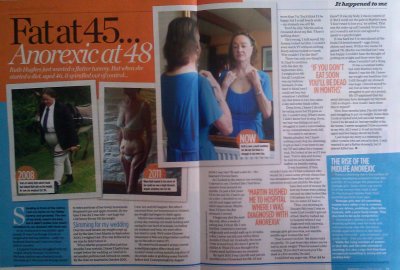 Standing side on in front of the mirror, I put my hands on my tummy and groaned.

The rest of my body wasn’t too bad. But it didn’t matter how much I breathed in, my stomach stuck out.

But with my huge tummy I looked at least six months pregnant.

I’d always struggled with my weight.

Mum Audrey was a fantastic cook. It was hard not help yourself to extra portions when you were faced with her home-made Shepherd’s pie and apple crumble.

In my twenties an office job where cakes were on a tempting tea trolley meant I put on more weight. By the time I was 31 I weighed 14 ½ stones and decided to diet.

In eight weeks I went on a crash diet, cutting out far too much food too quickly, and ended up at just 7 stones.

But having realised I’d lost too much weight, I soon got eating again – and ate even more.

It wasn’t even takeaway food – like mum I adored home made meals and large portions.

Aged 37 – when I met Martin through friends – I was about 12 st. And although I’d managed to lose some weight for my wedding so I was 11 st in my dress – soon my weight began to climb again.

Martin was a hearty eater. And after a busy day running our small holding and caring for all the animals, both of us loved to tuck into some good old fashioned home cooking.

I’d bake a pile of fish and chips and we’d both curl up on the sofa to watch TV together. Often we’d have a piece of chocolate cake too and maybe some biscuits before bed. Unsurprisingly my weight had crept up to 16st 7Ib. I was a dress size 22.

But now here I was feeling the effects of all that eating. Hours earlier I’d been reduced to tears after seeing a photo of me with the fattest stomach I’d ever seen.

Now, as I stood there staring at myself in the mirror I vowed to lose weight.  I wouldn’t do a crash diet as I’d done in my early thirties. I would simply cut back on my portion sizes – just a little … enough to give me a flat tum.

I wouldn’t be fat and middle aged. As I reached my 50s, I would be elegant with a slim body.

I began my ‘diet’ the next day.

“Don’t give me too much cereal,” I said to Martin at breakfast.

“You don’t need to lose weight,” he replied. We both knew I did – but Martin loved me anyway whatever my size.

However, I was determined my self-made diet would work.

It was August 2009 and over the next few weeks, just by cutting back on the amount of food I ate, I lost an average of 2Ib to 3Ib a week.

Within three months I’d lost three stones. I felt so proud of myself, especially as my weightloss was slow and regular. I’d knew from before how dangerous crash dieting could be and there was no way I ever wanted to repeat that experience again.

Christmas came and went and I continued to lose weight. Incredibly I never even felt hungry.

Only, as I stared at my feet one thing bothered me terribly. My fat tummy.

It just stuck out. In fact now as my body looked slimmer, my tummy almost looked worse.

I felt distraught. There was only one thing for it – I had to continue with my diet.

I cut out all milk from my coffee to give it the final push – but by September 2011 although I only weighed 6st 13Ib, my big tummy was there.

When he agreed to refer me to a plastic surgeon – adding that I was too thin and should start eating more – my spirits rose. Finally I would have the tummy I dreamed of.

But a couple of weeks later the surgery rang – they were sorry but tummy tucks were no longer funded under the NHS.

I looked online but to have a tummy tuck done privately would cost thousands – money we didn’t have.

There was only one thing for it – I would have to diet some more.

It was hard to think how to eat less but finally I whittled my diet down to a couple of rice cakes a day, some black coffee and carrots.

Martin worried I was too thin. “You need to eat more,” he’d plead. But I would just look at my tummy and the old feelings that I needed to lose more weight would come rushing back.

Then in November I was brushing my hair when a handful fell out. I’d also begun to feel tired all the time. I was too tired to do any donkey rides – it took all my strength just to feed the animals.

Underneath I knew I should be eating more and that my diet was no longer healthy. Only now I’d gone so far I felt I couldn’t stop.

In January I was so weak I simply couldn’t get out of bed. Martin rushed me to see my GP who diagnosed me with anorexia. I was shocked – wasn’t anorexia something teenage girls got, not sensible middle aged women like me?

“Your tummy’s not fat,” he added, “it’s just loose skin where you’ve lost so much weight. And if you don’t eat soon you’ll be dead by Easter.”

Being told so bluntly was the wake-up call I needed. From then on I forced myself to eat more.

It was hard but I introduced all the foods for months I’d denied myself – eggs, bread, cheese and meat.

Within two weeks I’d gained half a stone. It was difficult in my mind to think about putting weight on but at the same time I felt so much better.

By March I was 8st 4Ib but although I knew that was a healthy weight, I still felt my tummy was huge.

At the same time, I found it harder to gain weight. In fact I started to lose it again – and by April I was down to 7st 2Ib.

I’m currently undergoing tests for find out why despite the fact that I’m eating better, I’m not putting weight on. Doctors are worried that the cause might be my thyroid caused by damage I’ve done to myself with my strict diet.

I feel so guilt for the worry I’ve put Martin through. I’ve been so unwell I’ve had to close part of the business that I ran – which was doing donkey rides for children and weddings – because I felt so weak.

Bizarrely there are still days when I look at myself and just see a fat tummy. I don’t know if I will ever be able to eat normally again or feel happy about my body.

I just hope my story is a warning to any other women who are about to diet. I only wanted to get a flatter tum – and yet it could have killed me.”

Do you have a real life story to sell? If you would like to sell your true story to a magazine or newspaper, then contact us on the form to the upper right of this page!