Story in TAKE A BREAK magazine THE DAILY MIRROR newspaper, DAILY MAIL and ITV THIS MORNING…

Sell your story to Take a Break magazine? If you have a story to sell, fill out the form to the right of this page …

Steve wooed Alison Peters, 65, with the promise of romance and riches. But was she mad to trust him? 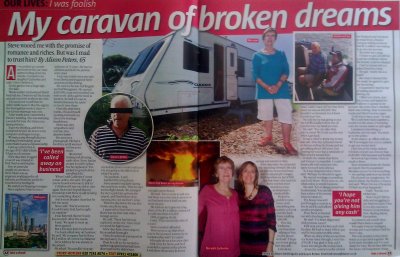 Tears rolled down my cheeks.  Minutes earlier husband David had given me the most devastating news. He wanted to split up.

And now my head was spinning. We’d been married for 42 years. We had two beautiful grown up children and four grandchildren.

Of course we’d had ups and downs in our marriage. But when in August 1969 aged 22 I said those vows I’d meant them for life.

Yet David’s mind was made up. He was sick of me nagging him and he didn’t feel it was too late for him to have a fresh start.

“I want to sell the house,” he said, “and buy a boat, go sailing round the world.”

Devastated I went away with our daughter, Catherine, 53, for a few days.

I hoped David, 68, was having some sort of late-life crisis.

Only by the time I got back, a For Sale board was outside our home.

Weeks later David and I were still sleeping in separate beds. Barely speaking, I moved out to Catherine’s.

And it was there, one evening while I was surfing the internet that I decided to join a dating website.

Of course I was nervous. But a few weeks earlier I’d been to a friend’s wedding. She’d married a wonderful man, whom she’d met on a dating site.

And as my marriage was over, I thought why not…

By now both David and I had seen solicitors and decided to divorce. 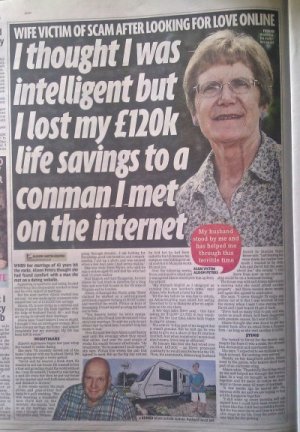 I posted my profile. It said, ‘’Woman going through divorce, still working, with two grown up children.  I am looking for friendship, good conversation and companionship.’

Next to it I put my photo. I didn’t tell anyone and I didn’t expect at the age of 65, I would receive much interest.

But over the next few days I was amazed to get about seven replies.

One of them was from Steve Myers, a widow – and being a teacher, his well-written email immediately caught my eye.

Aged 55, he explained in perfect English that twelve years ago his wife had died.  Half English and half Hungarian, he’d lived in America for a long time but he now had houses in Virginia, US and Croydon.

Steve claimed he worked as a self-employed petroleum engineer earning £100,000 a year and travelled the world.

Within an hour of messaging, I found myself pouring my heart out to him.

‘You deserve better,’ he wrote sympathetically after I’d said how devastated I was about my marriage.

He sent me a photo and when I saw his kind face, I couldn’t help but warm to him.

The next day he even rang. He had an accent that I couldn’t place but he explained, ‘I’ve picked it up with all the travelling I do.’

Over the next few days I could barely wait until the evening when we would chat online. 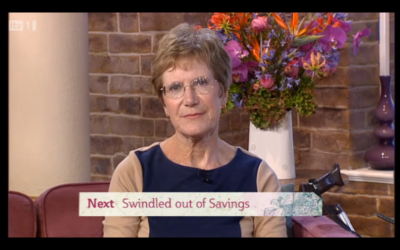 After so many months of unhappiness, my confidence was bolstered. Catherine was pleased for me, that finally I’d found someone over the internet to talk to.

Over the next couple of weeks his emails became affectionate.

‘You’re someone I could marry,’ he gushed.

‘But I am still married,’ I reminded him, ‘and as a Christian, if I remarried, that person would have to become a Christian too.’

Yet nothing was too much trouble. Back came another email full of bible quotes.

‘God has brought us together,’ he replied, ‘pray for me…’

But then just as we were about to meet, a huge disappointment.

‘I’ve been called to the US,’ said Steve, ‘there’s an oil contract in Malaysia that my company bid for – a $5.2 million dollar contract. I need to go to a conference in the US run by a large energy company.’

On his way to the airport, I got another surprise phone call. ‘You couldn’t top up my mobile phone credit could you?’ he asked, ‘Only I’m not going to be able to do it while I’m away.’

‘Of course not,’ I replied. What was £50 pounds between friends…

Over the next couple of weeks, Steve continued to email.

He sent me his flight details.

We arranged that I would pick him up from the airport.  My stomach tingled as I imagined us running into one another’s arms.

And as his suggestion, I booked a hotel.

Only the day before he was due to return my mobile rang.

I expected to hear Steve’s voice but it was another man on the end of the phone.

The Asian sounding man had a message for me. There had been a big explosion and accident on the site in Malaysia. Unfortunately Steve had to cancel his flight to the UK and fly to Malaysia that day.

The news hit me in the stomach. I’d been so excited to meet Steve at last. I’d even already paid for his hotel room.

He needed equipment but as all the money was still tied up in the contract, he didn’t have enough cash to buy it.

A tiny part of me nagged. Was it genuine? I’d seen programmes about gullible women on the news who’d given money to fraudsters on websites. But then Steve was different and anyway, I wasn’t the sort to be taken in by something like that.

And when tentively I mentioned about scams Steve was so offended.

‘Ok,’ I replied. I had the money tied up in a savings account and wired it to him.

Once Catherine overheard me talking about money with Steve.

‘I hope you’re not giving him any cash,’ she said. I shook my head. I didn’t dare tell her I’d even taken out a loan on the internet to help Steve out.

And I was still paying £50 a month for his mobile phone bill.

By now Christmas was over and my divorce was going through.  I took out two bank loans on the internet and sent over another £20,000 for more equipment.

But when Steve asked me for more money to pay tax I told him he’d have to wait.

‘I’ll have the money when my house I shared with my husband is sold,’ I told him.

Then in February I rang David to discuss the house and he started talking about old times.

Just hearing his voice made me realise how much I wanted to be with him.

‘Perhaps we should think again,’ said David, and I said if we went to counselling, I would consider trying to make a go of our marriage.

I was honest with Steve and he was terribly disappointed but understanding. From now on our relationship could be on a business footing.

‘You can still have a share of the money when it comes in,’ he said.

Finally, in February the house was sold.  I bought myself a caravan to live in until I could afford another property.

Only now Steve was ill. At first he thought it was high blood pressure brought on by stress, then general illness. Eventually – and upsettingly – he was diagnosed with prostate cancer.

Steve had so many bills to pay and was under so much strain, I was delighted to be able to send him £70,000.

It was terrible news but at last the contract was finished.

‘The work’s been inspected,’ said Steve. At the same time I received an email from an organisation called Crown Third Party Finance to let me know 5.2 million dollars was waiting to go into my account.

The only snag was before it was to be released, I’d have to pay £10,000 for a special certificate.

There was nothing for it – I had no money so I went to David.

He frowned. ‘But surely this is a scam?’ he said. Only when I showed him all the documents, he finally gave me the money.

I expected to see millions in my bank account. But nothing ever arrived.

David knew for sure it was a scam. ‘That’s you and me over for sure,’ he said.

I still couldn’t believe it. But Catherine said I should go to the Police.

‘These scams are happening all the time,’ said the Police officer, ‘we will investigate but I’m afraid you’re unlikely to get any of this money back…’

As soon as I got home, I emailed Steve.

‘You’re a scammer and I’ve gone to the Police,’ I wrote, ‘because of you I’ve lost everything – my savings and even my husband.’ Tears pricked the back of my eyes. How foolish I’d been. The feeling of betrayal was huge.

Incredibly, Steve emailed back denying it was a scam.

However, weeks on I’ve yet to receive a penny.

Instead I’m left with loans to pay back. I put my head in my hands and wept. How could I be so stupid?

The only positive is that David wants us to get back together. We both made mistakes and I’ve paid dearly for mine. But we have faith that the future will bring better things.

Have you been scammed? If you’ve suffered at the hands of an internet scammer and would like to sell your story to warn others, contact us here: Sell My Story

Category: Recent Stories 2012, Sell my story to the Mirror, Stories sold to newspapers, Take a Break storiesBy Alison Smith-SquireDecember 21, 2012
Tags: Conned and scammed - real-life stories
Share this post
Share with FacebookShare with TwitterShare with PinterestShare with LinkedInShare with WhatsApp