Got a story to sell to the Sunday Mirror newspaper or want to tell your story on TV? Fill in the quick submission enquiry form to the right!

My 18-year-old son ran off with my 39-year-old best friend… but we’ve made up now that she’s had his baby!

When Natasha Dodds’ 18 year-old son fell in love with her best friend, she was devastated.

The shocked full-time mum of four didn’t only feel terribly betrayed – she believed their love could never survive their 20-year age gap.

And after a blazing row between her and friend Sasha Haq, now 40, and son Nicky, now 20, the three of them didn’t speak for a year.

But today all three have been reunited after Sasha gave birth to Nicky’s baby – and Natasha’s first grandchild.

Last night, cradling grandson Carlton, five months, an emotional Natasha, from Newcastle Upon Tyne said: “I never thought I would get over Sasha running off with Nicky.

“He was just a teenager and she was a grown woman, someone I’d known when I was pregnant with Nicky and she was expecting her son, who is the same age.

“But the day Carlton was born was the best day of my life. And now I look at Sasha and Nicky together and can see how much in love they are and how happy they are together.”

Natasha and Sasha first became friends in their twenties.

Says Natasha, who already had son Jamie, 25, when they met: “We met at a party and over the next few years became firm friends.  Both of us were pregnant at the same time – me with Nicky, who was my second son, and Sasha with her son Daniel who was born five months before.

“When my relationship with Nicky’s dad finished, Sasha was there for me as a shoulder to cry on. And when her relationship finished too and we both met new partners, incredibly we ended up pregnant again at the same time. “

Natasha who now has another son, Cameron, ten, with partner Marc, 37, a mechanic, recalls: “We were so close.  We always lived within half an hour’s drive of one another. And even if we didn’t manage to see one another for a few weeks, as soon as we got together, we’d be chatting as though we’d never been apart.”

So when in Feb 2011 Sasha split up with her daughter’s partner it wasn’t a surprise she sought solace with Natasha.

“Sasha was in a really bad way when I suggested that she and Chanelle come to stay with us for a few days to clear her head.”

But never did she expect her friend to fall head over heels for Nicky.

Sasha takes up the story.

She says: “I was so grateful for the invite from Natasha. I hadn’t seen her kids for years – we’d often met up for drinks when the children were at home – and was looking forward to catching up. Nicky was just a child of about three when I last saw him.”

Certainly, she was not prepared for the overwhelming feelings that surged when she was introduced to Nicky.

“Immediately I thought he was gorgeous,” she recalls, “in fact our eyes met and straightaway I felt a tingle of excitement I’d never felt before.”

Nicky felt the same bolt of feelings as she did. “I couldn’t believe how attractive my mum’s friend was,” he recalls, “It didn’t matter to me she was so much older. I fancied her straightaway.”

The tension between the two was electric. 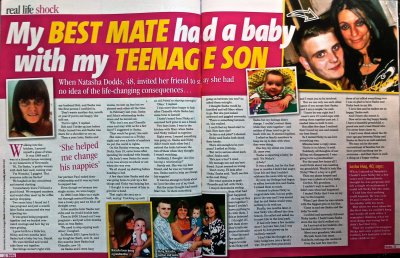 And Nicky didn’t hold back. Explains Sasha, a beautician: “It might sound strange – after all we’d only just met – but both of us knew we had something special. We only had to glance at once another to know we both felt the same way.”

So when later that day Nicky pulled Sasha aside and confessed his feelings, she wasn’t surprised.

“He said he had feelings for me,” she says, “we even stole a kiss when we knew Natasha wasn’t looking. But I told him despite the fact I felt the same strong feelings of attraction for him, we couldn’t give into them.

“After all, he was just 18 – the same age as my own son. Then Natasha was my friend. We’d known one another for years and I couldn’t risk our friendship.  There was a 20 year age gap between us – realistically it could never work.”

Nevertheless, the next day when Sasha went home to get some more clothes, Nicky came with her. And once they were alone in her flat, the pair fell into one another’s arms.

Admits Sasha: “We couldn’t keep our hands off one another.  I remember at the time thinking what I was doing was so wrong – but at the same time being with Nicky felt so right.”

When the pair didn’t return home that night, Natasha became suspicious. She recalls: “At first I thought nothing of it. After all, it was late in the evening when they’d left – it didn’t seem nice for Sasha to be travelling back in the dark by herself – and it just never crossed my mind anything would happen.” 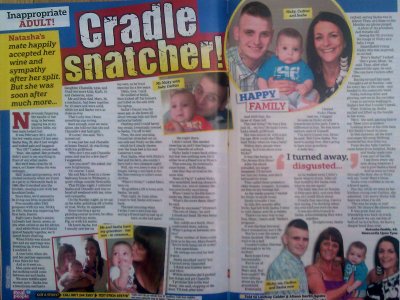 However, when the pair returned the next day it was clear something had gone on.

“I couldn’t put my finger on it,” says Natasha, “because Sasha and Nicky were not openly cuddling or kissing and no-one said anything. But I could sense from the intimate way they looked at one another when they thought I wasn’t looking, that something had happened between them.

“My partner Marc noticed it too. Eventually he said, ‘Is there something going on between you two?’

To Natasha’s horror, neither of them denied it. Instead the pair confessed there was ‘something’ going on.

Recalls Natasha: “We had a terrible row. I simply couldn’t believe it. Nicky had had girlfriends but no-one serious – now here he was with my friend. It seemed so wrong and I couldn’t help but think one or both of them would get terribly hurt.”

It ended with Nicky, a painter and decorator, and Sasha storming out.

Says Sasha: “Before I went, I looked Natasha in the eye. I said, “Don’t worry, I will look after Nicky. You will see this is the real thing. Nicky and I had been up half the night talking and I already knew I felt for him as I’d never felt for any man before.”

For months Natasha and Sasha and Nicky didn’t speak.

Then in July last year, Natasha’s eldest son gently told her Nicky and Sasha were expecting a baby.

“I thought it would just be a fling that would be over in weeks so it was a bolt from the blue,” confesses Natasha.

Sasha and Nicky were equally shocked to discover they were having a baby. “But we were also thrilled,” says Nicky.

But a cloud hung over their joy. Nicky says: “I didn’t like the thought of my baby being born into a family at war. And it was also mum’s first grandchild. I knew Sasha also longed to share her happiness with my mum.”

Nicky texted his mum to meet. Natasha says: “We met in a park with his little brother and sister. And I was struck by how mature he was. He was also firm – he said we could only see one another again if I accepted Sasha.”

Over the next few months Natasha wrestled with her feelings. “I didn’t know if I could cope with seeing them together. But at the same time this was my first grandchild, I loved my son and missed my friend.”

So she texted Nicky to see how he was. “Incredibly I got a wonderful text back to say Sasha was actually in labour.”

A few hours later in the early hours of the morning, a tiny photo popped up on her phone that made her heart lurch. “It was a picture of newborn Carlton,” she says, “he’d just been born and Nicky had texted it to me from the delivery room.

“Suddenly I couldn’t wait to see them.”

She drove to the hospital and was met by Nicky. “He was radiant, a glowing proud and new dad.  Immediately he suggested I see Sasha and hold Carlton,” she says, “I was so nervous – I hadn’t seen Sasha since the day she’d walked out. But I got to her bedside and when she put 7Ib 11oz Carlton into my arms, the tears came.  In fact the three of us were all in tears.”

Since then all three have wasted no time putting the past behind them.

“Nicky isn’t only a wonderful dad to Carlton, he’s fantastic with my other children,” says Sasha, “I did worry what my kids would think – especially Daniel as he is the same age – but they are just happy for us.”

The couple are now saving up to get married. “We hope to wed sometime next year,” says Nicky.

Meanwhile Natasha, who regularly babysits, says: “We are now one big happy family. I have the most beautiful little grandson, I have a son who is happy and in a stable relationship and Sasha and I have become even closer than we were. It may not be the most conventional of relationships but we have proved anything can be overcome and there is such a thing as a happy ending.”

Do you have a relationship story with a happy ending? If so we would love to hear about it! Just fill in the sell my story form with some brief details…