Story in Good Health in the Daily Mail newspaper… 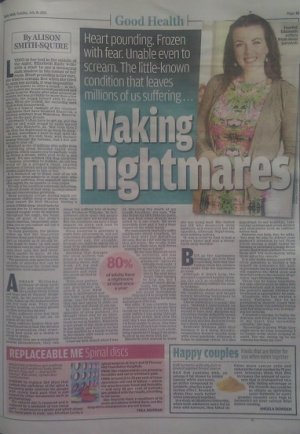 Lying in her bed in the middle of the night, Elizabeth Earle woke with a start to see a menacing dark shadow in the corner of her room.

Heart pounding in her ears, she tried to scream.

But when she tried to open her mouth, it was impossible.

She was unable to utter a sound — in fact, to her horror she found herself paralysed and unable to move.

Finally after what seemed an eternity, but was probably no more than a few minutes, she found herself able to move again.

When she looked, the menacing dark shadow had disappeared.

This is a typical example of the constant nightmares that have haunted Elizabeth, a teaching assistant from Nuneaton, Warwickshire, for the past decade.

‘Afterwards I often have to get up, put the light on and walk round to calm myself down,’ says Elizabeth, 23.

‘But even then I am often too frightened to go back to sleep.

‘In fact, sometimes I have to wait until the sun comes up.

‘It’s only then, with daylight seeping through the curtains, that I feel safe enough to doze off.’

Elizabeth is one of millions who suffer from a terrifying sleep disorder called sleep paralysis, which causes you to partially wake up during a dream, while your body is still ‘asleep’.

It’s also dubbed Old Hag syndrome — because, according to folklore, an old hag would sit on a sleeper’s chest, causing shortness of breath and an inability to move, sending nightmares to him or her.

It is estimated up to 60 per cent of us will experience sleep paralysis at least once, with 5 per cent suffering from repeated episodes, often nightly, for six months or even longer.

Not only is the condition extremely disturbing, it can rob people of their sleep, causing exhaustion and concentration problems.

During a period of REM sleep, which lasts for around five to 15 minutes and is repeated roughly every 90 minutes throughout the night, the brain turns off most of the body’s muscle function, temporarily paralysing you so you cannot act out a dream, he explains.

‘In sleep paralysis, the person wakes up but the transition between sleep and waking up fully isn’t as smooth as it should be.

‘They begin to wake up and may sometimes even be able to partially open their eyes, but find themselves unable to move.

‘At the same time they are still dreaming. The paralysis only lasts for a few seconds or minutes but can be terrifying because the victim may experience vivid hallucinations.’

Adrian Williams, professor of sleep medicine and consultant at the London Sleep Centre and Guys and St Thomas’ Hospital, adds: ‘As the person has partially woken up the hallucinations can feel very real.

‘They often involve hearing, or seeing ghosts or other menacing figures.

‘Some sufferers even feel they are being touched, sat on, or pulled off the bed.’

Many sufferers believe they are being haunted or that the dreams are a premonition that something bad such as a death is about to strike.

‘Although they are a completely normal phenomenon, they can cause the sufferer lots of worry,’ says Professor Williams.

‘In fact, sufferers often don’t tell people due to fears they will be ridiculed.

‘But the condition can have a huge impact on sleep and lead to insomnia and tiredness.’

Sleep paralysis is generally a night-time phenomenon, and not something people suffer during an afternoon nap, for example, because you must be asleep for at least 70 to 120 minutes first to get into REM sleep.

Anything that disrupts the sleep pattern can result in an episode — including stress, shift work, jet lag and some medications, illnesses and even too much alcohol or caffeine.

Not only sleep paralysis extremely disturbing, it can rob people of their sleep, causing exhaustion and concentration problems

‘Even your partner snoring next to you can precipitate an attack if your REM sleep is interrupted and you wake up during dream sleep,’ says Dr Stanley. However, they can also appear to strike out of the blue and attack at any age.

In those who suffer frequent episodes of sleep paralysis, it’s thought there may be an inherited tendency, as the condition tends to run in families.

Elizabeth is not aware of any sleep paralysis in her family, and believes for her it was sparked by a family tragedy in November 2000 which severely affected her sleep.

‘I had my first attack when I was 11, following the death of my cousin Jonathon,’ she says.

‘The day before his 18th birthday party, he and four other friends were killed in a car crash.

‘We were incredibly close and it had a huge impact on the whole family.’

She immediately started to suffer nightmares about Jonathon

‘At first they were just disturbing dreams. But as I got into my teens they got worse,’ she recalls.

‘I felt as though there were dark forces waiting for me as I slept.’

By the time Elizabeth went to university, she was experiencing a sleep paralysis episode virtually every night.

‘I would try desperately to scream so someone in the next room would come running to help me, but I couldn’t move.

‘Eventually, the nightmare would break. The paralysis would immediately stop and I’d be properly wide awake although gasping for breath and gripped with fear.

She adds: ‘It was a terrible time — when I confided in people they would say it was just a dream.

‘But some nights I was going through eight hours of hell. And often the next day I was shattered because I’d been unable to sleep.

‘One time when I was 20 and had come home from university, I had such a terrifying experience I begged my mum to sleep in my room with me.’

Elizabeth even started to worry she was going mad.

She visited her GP, who diagnosed sleep paralysis and reassured her the episodes, although frightening, were nothing serious.

‘It was a relief to find it had a proper name and was a recognised sleep disorder.’

Although it didn’t help, the therapist suggested healthy sleeping tips such as avoiding stress and not drinking caffeine too close to bedtime.

Elizabeth also started to research the condition online and taught herself breathing techniques to cope when paralysis strikes.

‘I have learned not to panic,’ she says.

‘Instead I concentrate on breathing steadily and telling myself it isn’t real.

Keeping my breathing steady definitely seems to help bring the nightmare to an end much quicker. And now I only have them once a fortnight.’

Professor Williams adds that because it is a sleep disorder, counselling doesn’t usually help with sleep paralysis, although it helps to manage stress.

It’s also important to eat healthily, take regular exercise and avoid alcohol and stimulants such as caffeine before bed.

Partners can help, too, he adds. ‘You may be able to attract your partner’s attention to tell them you’re having a night terror by blinking or breathing quickly.

‘Some people find if their partner touches them that will immediately bring them out of the episode.’

It is also worth seeing your GP. ‘If sleep paralysis is having a big impact on someone’s life, antidepressants can be prescribed that will suppress the REM sleep and therefore reduce the number of episodes,’ says Professor Williams.

These can be taken long-term, but side-effects must be taken into consideration and it depends on the patient’s history whether the treatment is appropriate, he adds.

Elizabeth, who has written a novel, Tartarus, due to be published in August, found that knowing there was nothing wrong with her went a long way in reducing her attacks.

‘I created a heroine, to battle the demons, and living out those fears in my novel was incredibly cathartic,’ she says.

‘Knowledge is power. While they might never go away completely, I no longer worry about sleeping at night.

‘For me, facing up to my demons has been my cure.’

We are featuring Elizabeth’s story on our own popular online magazine, sellyourstoryuk.com. If you would like to promote your novel, contact us for advice using the form to the right of this page.