I’ll never have a baby in case it becomes an alcoholic like me… story in Life&Style, DAILY MAIL…

“I’ll never have a baby in case it ‘s an alcoholic like me’, says woman whose family has been beset with the addiction. 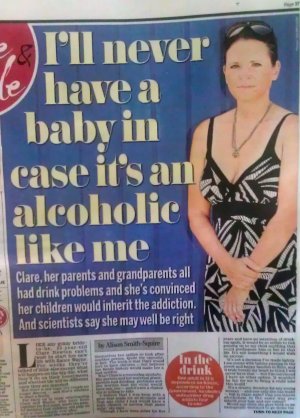 For weeks they’ve talked of little else except what will happen on the big day, what they’ll do on their honeymoon and whether life will be different once they are married.

But there is one topic the couple no longer discuss — and that’s whether to start a family.

For early on in their relationship Clare and Wayne, who have been together for five years, made the painful decision that children will play no part in their happily ever after.

It’s not because the couple consider themselves too selfish to look after another person. Quite the opposite, in fact.

The truth is that Clare would love to have children — but believes her family history would make her a bad mother.

Why? Clare is a recovering alcoholic. Her parents and her maternal grandparents had drinking  problems and she worries that her child would have one, too — and it’s not a chance she is willing to take.

‘I believe that I was born with a gene that made me an alcoholic and that any child I had would have a high chance of having that same gene,’ she says.

‘Though I have been sober for five years and have no intention of drinking again, it would be so selfish to risk passing on to my child anything that could predispose him or her to that life. It’s not something I would wish on anyone.

‘It’s not a decision I’ve made lightly. I see mums with babies passing in the street and happy families in films, and it truly breaks my heart to think I will never have that — but I’m convinced I have no other option. It wouldn’t be fair for me to bring a child into this world.’

It’s a drastic decision for any young woman — and one only she can make — but is Clare right? Can you inherit alcoholism in the same way you inherit your hair and eye colour?

Would any child she gave birth to be biologically destined to go down the same alcoholic path that she and her parents did? It’s something scientists have argued about for years. And last year a groundbreaking report at the Texas Biomedical Research Institute offered tantalising evidence of a genetic link.

Researchers studied the brainwaves of problem drinkers and found they all had the same distinctive patterns of brain activity, and so did their children.

Other studies have found that genetically identical twins have a higher chance of having drink problems than non-identical twins — suggesting the stronger the genetic connection, the higher the risk, with the influence of a shared home environment and upbringing being less important.

‘There is no denying that if you had a parent with a drinking problem, you are more likely to have one yourself, but the jury is still out as to how big a part genetics play,’ he says.

‘Some studies say children of alcoholics are eight times more likely to have a drink problem than the average, and certainly the vast majority of people I treat have a family history of drinking.

They might come from a long line of drinkers, with parents, grandparents and even great-grandparents having a drink problem — but we have not yet been able to find a single gene that causes alcoholism.

‘That said, there have been interesting Danish studies that have looked at children born to alcoholic parents who were then adopted and brought up in non-drinking families. These children were more likely to grow up and have a drink problem, which would suggest there is a genetic element.

‘However, you could argue they drank because they knew they were adopted and felt they didn’t fit in.

‘There have also been studies of children born to non-drinking parents who were then raised in an environment where alcohol was a problem. The majority of those children went on to stay sober, despite their environment.

‘So yes, I think there is a genetic link, but it doesn’t always follow. It comes down to genetics, personality and environment.’

Clare grew up in a home in which alcohol flowed day and night. Her parents, Wendy and Geoff, ran a pub and hotel in Norfolk, where they were the life and soul of the party.

‘To all the locals my parents were a golden couple,’ she says. ‘They wore beautiful designer clothes, splashed out on expensive jewellery and drove a flashy Lotus and Porsche.

‘But so many memories of my childhood are of me not going to school because no one had taken me; my mum surfacing bleary-eyed and my dad sipping his morning orange juice laced with vodka.

‘I was always in the bar, sitting near my parents, legs dangling over a stool.

‘I grew up in a world of adult conversation, believing it was normal to drink from lunchtime — and that it was essential to have a drink to enjoy yourself.’

It’s undeniable that this kind of behaviour does make a child more likely to drink. A recent study by the Joseph Rowntree Foundation found that a teenager who has seen his or her parents drunk is twice as likely to get drunk repeatedly.

‘Every child learns how to behave in the world by copying their parents — and if that behaviour is drinking, they may follow suit,’ says addiction psychotherapist Raymond Dixon.

‘However, in the argument of nature versus nurture, I fall down on the side of nature. Yes, you can learn how to drink by watching your parents, but there is a difference between drinking too much and becoming an alcoholic.

‘Some people will drink heavily in their late teens and early 20s, but are then able to stop — others cannot. From that first drink, they are out of control, the drink takes over and that is the definition of addiction.’

This was Clare’s experience. She believes from her first drink, aged 12, she was hooked.

‘I poured myself a glass of cider from behind the bar at the hotel,’ she says. ‘I immediately liked the taste. I remember thinking: “Now I know why everyone drinks.” By the time I was 15, I was drinking several times a week in secret.’

This kind of experience is common, says Dr Shanahan. ‘I treat people who, decades later, can remember the first moment they had a drink. They often say something had clicked. After that, one drink was never enough — that’s a chemical reaction and I think it’s down to genes.’

By the time Clare was 17 she found herself repeating her parents’ patterns. She left home to escape their drinking, which was causing violent rows, and found work as a model, where drink was plentiful.

She says: ‘I thought of myself as a free spirit — enjoying myself as my parents had done.’

The good times didn’t last for long, however. Soon Clare drank so much that she would regularly pass out at parties and people were starting to comment. ‘I was drinking three bottles of white wine on weekend nights and a bottle on a week night. If anyone so much as mentioned that I had a drink problem, I would cut them off.’

During this chaotic time, Clare lost contact with her parents.

After her modelling career ended she got a job in IT, but crippling hangovers and erratic behaviour meant she couldn’t keep any position for long. She defaulted on her mortgage and ended up in a homeless shelter in Stevenage.

‘It was my lowest point,’ she says. ‘By then I had sunk into doing nothing but drinking — stealing gin and tonics in cans from super- markets. I told myself I deserved my little treats.’

One day in 2007, at the age of 28, she hit rock bottom. ‘When I looked in the mirror it was like looking at myself for the first time,’ she says.

‘Gone was the slim, attractive young woman I had been and in her place was a fat, bloated mess. Once I was a size eight and now I weighed 11st and was a size 14.’

She adds: ‘Even my fingers were puffy from drinking. For the first time in my life, I knew I couldn’t carry on. I’d got to the point where I had to have a drink to feel normal. I knew if I didn’t get help I would die.

‘I picked up the phone and rang Alcoholics Anonymous. That day I went along to my first meeting and vowed to get better. It was so emotional, but for the first time I could speak out about drink.’

It was the turning point. Soon after, free of alcohol, Clare met Wayne, 33, and her life transformed.

However, her relationship with her parents has never recovered. While Clare speaks to them occasionally on the phone, she has not seen them in six years.

‘I’ve heard that they no longer drink. But the memories are still so painful that not seeing them is a way of blocking them out,’ she says.

‘Growing up I hated how much my parents drank and the fact I went down the same path shows how strong the family tendency is.’

So what should you do if you worry that alcoholism is in your genes?

‘Realise that it’s not your fault if you have inherited something,’ says Dr Shanahan.

‘But take it seriously. Watch the way you drink — does your personality change when you have your third drink? Do you find it impossible to stop? These are all signs that you need to take action.’

Many children of alcoholics decide not to drink at all because they find it’s either all or nothing. Clare is resolute that her family’s destructive legacy will end with her.

‘As a former alcoholic, I take each sober day at a time,’ she says.

‘Though I don’t envisage slipping back into alcoholism, I can’t take the risk of any child experiencing the same thing my parents put me through.

‘It may break my heart to remain childless, but having a baby would just be far too selfish.’

Have you battled an addiction to drink? Perhaps a relative has and you have helped them?