Surrogacy story in THE SUN newspaper, ITV THIS MORNING and NEW! magazine …

Sell your story about surrogacy? Simply fill in the submission form to the right.

As commercial surrogacy is illegal in Britain, more British couples are going abroad, especially to India… 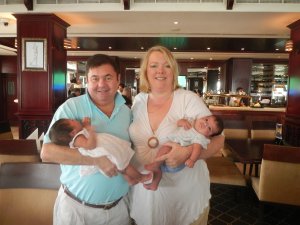 After years of trying for a baby with no success, Joanne and Chris McDuff are finally the proud parents of twins Andrew and Imogen, seven months. But their birth was controversial. For the McDuffs are one of a growing number of British couples to pay an Indian surrogate to carry and give birth to their baby for them.

Critics have slammed the ‘rent a womb’ arrangements at Indian ‘baby factories’ saying they exploit the Indian women, who are often very poor. Reports claim the Indian surrogates live in grim dormitories away from their families to have their babies for wealthy couples.

But the McDuffs, who paid a total of £28,000, have no regrets. Here, the couple from Stockport, Cheshire, describe their rollercoaster journey to become a family – and why they believe they did the right thing…

Joanne, 46, says: “Even now I often look at Andrew and Imogen – who we call Mimi for short – and I have to pinch myself. I just can’t believe after so many years of yearning for a family Chris and I have such a beautiful son and daughter.

Truly they are twin miracles. 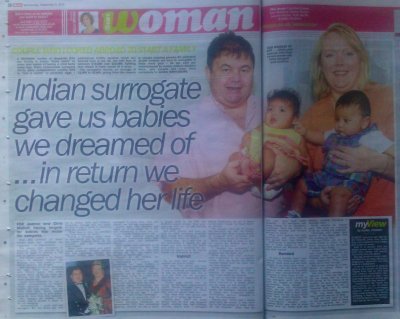 Incredibly two Indian women helped give us our twins. One was paid £1250 for donating her eggs, which were fertilised with Chris’ sperm. Meanwhile, another acted as a surrogate eventually giving birth to our babies for us.

While it seems strange that I never met the woman who gave birth to them, I am sure the £4,000 she was paid for carrying our twins will have transformed her life.

After all she was a widow, 26, with two children – and I know in India £4,000 can buy her children an education and the whole family a beautiful house.

Until I met Chris, I’d focussed on my career in Human Resources. But when we got chatting on an internet dating website – he was in Australia and I was in England – my broody urges suddenly surfaced.

And as soon as we wed in 2004 we began trying for a baby of our own. Only after a year with no sign of a pregnancy, I saw my GP who referred both of us to our local hospital for tests.

Frustratingly everything came back fine. The only reason doctors could think of was at the age of 39, my eggs were past their best. And I was also overweight.

I tried to diet but as the months ticked by I realised even if I slimmed right down, because my eggs were older, there was no guarantee I’d conceive.

So we turned to fertility treatment – spending thousands of pounds on three cycles of a type of IVF. It was devastating when they all failed.

Around us other family and friends were all having babies. Although I was thrilled for them it made me yearn for my own family.

Desperate, Chris and I even looked into adoption.  We were too old to adopt a young child from the UK. But after a year of gruelling checks we were approved to adopt two children under the age of four from Bulgaria.

Only heartbreakingly months rolled by and no child became available.

That was when we started looking into surrogacy. Because of my age – I was approaching my mid forties – I needed a donor egg. And even then, there was no guarantee I’d be able to carry a baby.

Only it was complicated. In the UK it’s illegal to advertise for a surrogate or pay another woman to have a baby for you – and certainly we had no friends or family we could ask. And even if we found someone, what if she refused to hand our baby over?

Then searching on the Internet one day I stumbled on surrogacy abroad.  It was too expensive in the US but affordable in India. There it was regulated by the clinics. The Indian women treated being a surrogate as a business.

Chris was as keen as me – we both saw it as our last chance of being parents.

In June last year I emailed the Corion Clinic in Mumbai and was delighted when a doctor immediately responded – she even sent us a price list.

Within weeks we’d been sent photos of 15 Indian women egg donors. Each one listed their age and background – we got it down to two who had fair skin by Indian standards so our baby would look as much like us as possible. I made the final choice on gut instinct.

A few weeks later she produced 12 eggs and Chris flew out to India to give his sperm.

We thought we’d choose the surrogate too but three women were prepared with hormones and the best chosen on the day.

Three days later four embryos were implanted in a surrogate – it was strange being at home while such a momentous thing was happening thousands of miles away.

However two weeks later when the doctor emailed me with the news she was pregnant, Chris and I were delighted.

Only our joy was tinged with worry when we discovered she was having triplets. We knew for health reasons to both mums and unborn babies, surrogates were only allowed to carry twins.

Tragically, it meant at 14 weeks on triplet had to be terminated in the uterus with a lethal injection. It was terrible but we had no say.

Worse was to come when at 23 weeks the surrogate showed signs of going into premature labour. Chris and I barely slept – being so far away we felt helpless.

But early one morning when the surrogate was just past 28 weeks we got the call we dreaded – she was being rushed in for an emergency caesarean.

Thankfully within hours two little photos of Andrew and Mimi arrived by email but although they were healthy, they’d born so early, they were in special care.

It was heartwrenching especially when it took a week to get our visas to fly out.

But finally after a 36 hour journey and exhausted from days of anxiety we finally got to see them.

I cried – they were so beautiful and I was overwhelmed with emotion. 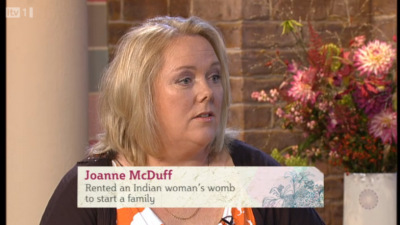 We wanted to thank the surrogate. We were sure although the babies were not biologically hers, she’d have bonded with them. And we longed for a photo of her with the twins. But by then she’d gone home.

Fortunately, having sorted out paperwork from the hospital stating we were the legal parents, Mimi came home after six weeks with Andrew following two weeks later.

The twins are a bundle of joy. They are sitting up, laughing and cooing. Chris and I are besotted – we are so happy.  All the agony was worthwhile.”

Chris, 49, says: “Ironically when I flew to give a sperm sample, I briefly met our surrogate in the corridor of the hospital. I thanked her profusely – but I really thought I would see her again.

However, the doctor was up front and very professional. She explained it is a business arrangement for parents and the surrogates.  When we contacted the clinic, we were given a price list. Extra costs included a caesarean, a premium for having twins and any special baby care. There was no suggestion of us meeting the surrogate and they paid her.

But we know also know she was given the very best medical care possible.

And friends and family were supportive – they knew how much Joanne and I have gone through to have our babies.

We’ve now set up a Foundation to help someone else have a baby in the same way. We were lucky – we were able to pay for it using a bonus from my job as a lawyer – and now we hope to raise enough money to help another childless couple’s dream come true too.” 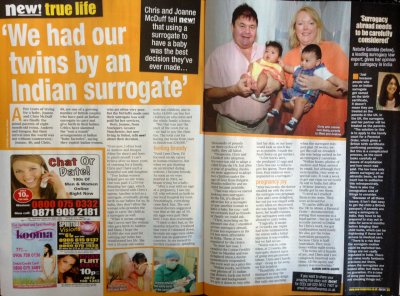 Do you have a sensitive story to sell? If so contact us in confidence using the form to the right of this page…