Story in the SUNDAY PEOPLE newspaper and WOMAN mag …

Sell your story to a Sunday newspaper? The Sunday Papers are always looking for stories like this – contact us on the form to the right of this page to sell your story….

After spending thousands of pounds on failed IVF attempts, Tammy and Stephen Colcombe resigned themselves to never being able to give son Samuel, 6, a little brother or sister. 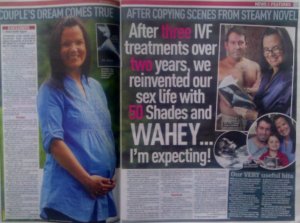 Tammy and Stephen Colcombe, both 37, had already endured four years of gruelling fertility treatment to conceive Samuel – and trying for their second had left them devastated and in debt.

The couple, who admit their love-life had fallen into a rut, credit spanking, using blindfolds and sending one another sexy emails – all used by the characters Christian Grey and Anastasia Steele in the bestselling book – with giving them a longed for second child.

“Yet amazingly within weeks of recreating the sex scenes from Fifty Shades of Grey, I had conceived naturally.”

Their quest for a family began when the couple – childhood sweethearts who met in primary school when they were just six – wed in May 2000.

Says Tammy, an accounts assistant: “We decided to try for a family straightaway. Both of us always wanted children and planned our whole lives around the kids we’d have.” 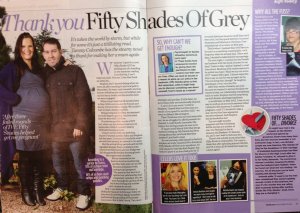 But after a year went by with no pregnancy the disappointed pair saw their GP who referred them for fertility treatment.

“Frustratingly tests couldn’t find any reason for our infertility but although I took the drug clomid to try to increase my chance of conceiving nothing happened. And in the end the NHS offered us one cycle of IVF.”

After agonising IVF treatment – Tammy suffered a life-threatening side effect when her eggs were harvested – she finally got the news she was pregnant.

In September 2006, 7Ib 5oz Samuel finally arrived and when he was four, they decided to try for another baby.

It was a stressful time because this time the couple would have to pay £2000 per cycle.

“We wanted another baby so much that I sold all my jewellery,” says Tammy, “so when that cycle didn’t work we were distraught.

“And worst, two more cycles – totalling a further £4,000 – failed as well. Having borrowed from family and taken out loans we were left in debt with nothing to show for it.”

With no way of raising any further cash for more IVF, the couple, from Redditch, Worcs, resigned themselves to just having Samuel.

But years of having sex to order had also taken its toll on their relationship. Tammy explains: “Trying for a baby for so many years had taken all the fun out of our love life. There hadn’t been a time in our 13-year marriage when we hadn’t been trying to conceive. We were always having sex at the right time when I was fertile.

“And with both of us leading busy lives, sex had become a chore, something else to be fitted into the end of a busy day. We still loved on another but in hindsight, we’d forgotten what spontaneous sex was like.”

Then in April this year friends were gossiping about a new book. “Everyone said how amazing the sex scenes were in Fifty Shades of Grey,” she says, “and I kept hearing how it was pepping up people’s sex lives.”

Stephen, a printer, says: “The first time Tammy came into the lounge after Samuel was tucked up in bed and said sternly, ‘there’s no TV for you tonight’ I was shocked. Although excited, I was also slightly worried. I knew she’d been reading this sexy book and I’d never seen her like this before.”

“Soaping one another as Christian and Anna do in the book was a wonderful experience,” says Tammy.

And the couple didn’t stop there.

She adds: “We also tried spanking, making love in different places such as our lounge and recreated a scene where Christian makes love to Anna when she’s blindfolded and listening to music through headphones.

“It didn’t just improve our sex life, copying the scenes from the novel has brought us closer together. It’s put the sparkle back into our relationship and made us realise how much we do fancy each other.”

Within weeks Tammy had morning sickness. “I thought it must be a bug – but decided to buy a pregnancy test anyway. When it was positive I was amazed. Stephen couldn’t believe it – we were both over the moon.”

She adds: “Fifty Shades of Grey hasn’t only changed our relationship for the better, it’s given us our longed-for baby.

“Incredibly a book I bought for a few pounds has proved more potent than any amount of expensive fertility treatment.”

Do you have a relationship story to sell? Perhaps a book has changed your life? If you have an amazing story to sell to the press contact us using the form to the right of this page!