Story in THE SUN, ITV THIS MORNING and BEST mag …

Transexual story to sell? Contact us for the best advice – simply fill in the form to the right.

Carla Lamprey says sex swap made her the perfect mum… 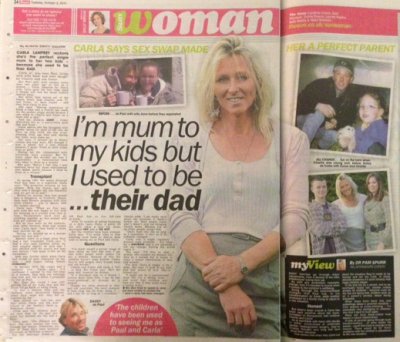 CARLA LAMPREY reckons she’s the perfect single mum to her two kids – because she used to be their DAD.

Carla, 47, was once Paul, living with wife Jane* and their daughter Charlie and son Conor.

But Paul split with nursery nurse Jane two years ago to live as a woman — Carla. Inspired by Jane’s look, Carla grew her hair long, dyed it blonde and had her facial stubble lasered away.

But while Jane moved out of the family home, kids Charlie, now 17, and Conor, 15, have stayed — and they love Carla to bits.

She says: “Having experience of being a man and a woman has made me the perfect single parent because I can relate to Charlie and Conor as a mum and a dad.”

And her children AGREE — Conor describing her as “a particularly good dad and mum”.

Carla admits she has struggled with gender issues for most of her life. As Paul, an only child, she was cross-dressing from age four and, during her teens, wore make-up.

She says: “I dressed up in Mum’s clothes and high heels. She thought it was a phase but I was bullied because I never fitted in with either boys or girls.”

During her 20s, transsexuals were becoming more common. But for many years she decided she was a transvestite — a heterosexual man who liked to dress as a woman.

She says: “Before I met Jane I was married twice but those relationships also ended, partly because I liked to dress as a woman.”

In spring 1993, the newly divorced Paul met Jane in a nightclub. Carla says: “The attraction between us was instant. With her blonde hair and blue eyes I thought she was beautiful and we got on so well.”

Within six months, they had moved into a bungalow in Crediton, Devon. Jane soon became pregnant with first child Charlie — and in March 1998 the couple married.

Carla says: “When we first met, jane said she was happy to live with me dressing as a woman from time to time. Occasionally we’d even go clubbing together as two women and both get chatted up.”

But as time went on the transvestism came between them and caused rows. Carla says: “Jane hated it when men chatted me up. Seeing me dressed up as a woman made her feel sick.”

Matters came to a head when Paul had a hair transplant. Carla says: “I had a very male hairline, where my hair receded slightly on each side. I was thrilled with the results but Jane was furious I had spent £2,000 on the transplant.”

Jane was further upset when Carla had £2,000 of laser treatment for her skin — and began taking female HORMONES.

In January 2010, the couple had a massive row. Carla says: “I’d confessed I wanted to live full-time as a woman. Jane said our marriage was over and, for a while, I promised to live as Paul. 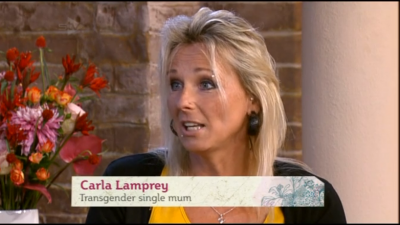 But then she found I was still getting rid of my body hair and she knew I’d go back to being Carla.

“It was a terrible time and the children were devastated because, when their mum left, they felt so rejected by her.”

Jane moved out, into her own flat, while Carla and the kids stayed at the family’s farm in Braunton, Devon.

Carla and the children have not seen Jane for the past two years but learned she has had a baby.

Carla says: “The children are hurt. The only contact has been through her lawyer. Otherwise, neither of them have even received Christmas or birthday presents.”

Yet the marriage break-up left Paul free to live full-time as Carla.

After 18 months of taking hormones on a daily basis, Carla, a petite 5ft 6in who takes a size ten dress, developed HIPS and a 32B BUST.

But the children have been unfazed. Carla says: “I’ve never tried to hide anything from them so they’ve been used to seeing me as Paul and Carla.

“I’ve made myself a mirror image of Jane, dying my hair like hers. I am also lucky people never realise I’m not a woman. Because of this the children haven’t been bullied. Unless they’ve told people, their friends have just not known.”

Charlie and Conor call Carla a “he” — or Dad. But Conor says: “He’s the same dad, however he dresses.

“If I introduce him to a friend, I always warn them first. I say he has trans-gendered so dresses as a woman.

“People are often shocked at first and ask questions. The most common is how long has he been doing it — and I say for as long as I remember.” 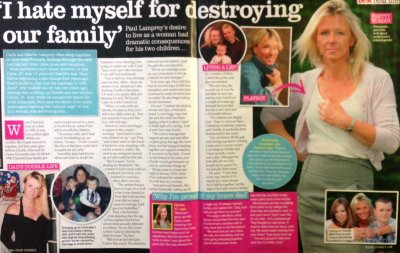 Charlie adds: “I am really open about the situation, it doesn’t bother me. Most people know and it doesn’t stop me bringing friends home. Because I’m so up front, people accept him.

“Dad’s been like this as long as I remember, it isn’t as if he suddenly changed.”

Carla, who is single, regularly attracts male attention — but longs for a GIRLFRIEND and is not planning a full sex change, fearing she would regret it.

She says: “I’d love to meet a woman who accepts me dressed full-time as a woman but is happy to enjoy a sexual relationship as man and woman.

For now, Carla is happy to be a mum. She says: “I look at my kids and feel proud of how they’ve turned out.

“I might not be a conventional mum but I’m a doting mum — and proof that children will turn out fine if they come from a loving home.”

We also tried to speak to Jane but were unable to contact her.

* Jane’s name has been changed.

Carla says: I didn’t know how easy it would be to sell my story until I came to Featureworld.” Sell your story? Contact us using the form to the right of this page.