As the craze for US-style beauty pageants sweeps the UK, we went behind the scenes of one of them … 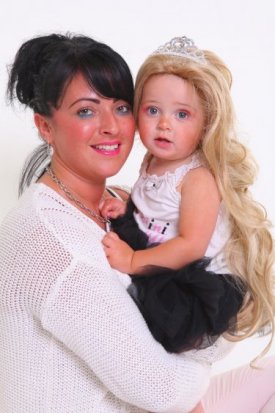 Aloka- Romaine Liddle is just 16 months old. But mum Claire Walker, 28, has decided to enter her into an American-style beauty pageant…

Next month (November) Aloka will be one of 100 finalists sashaying down a catwalk.

But despite criticism that her daughter is too young to take part in a beauty contest, Claire, a hairdresser, says: “Perhaps some people are jealous when they say I shouldn’t put Aloka in a wig and make up.

“But I don’t know what all the fuss is about. Aloka adores getting dressed up.  And she loves the attention. To me it is harmless fun.”

Claire first got the idea of putting Aloka into a pageant after a friend spotted an ad on the internet. 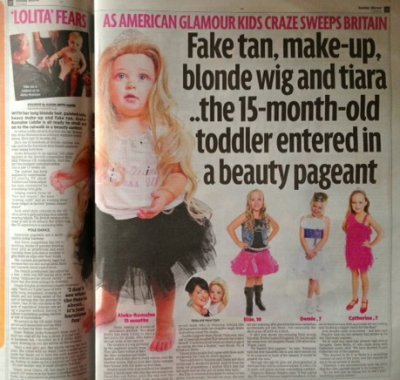 She says: “As everyone is always saying how pretty Aloka is and how girly she is.  Since she was one she’d adored copying me.  If you hold out mascara she already flutters her eyelashes up and down so she can have some one brushed on.

“And she regularly accompanies me to the manicurist to watch me having my nails done. She holds her hands out so the manicurist can polish them too – then she puts them under the drier.”

Claire had also seen Toddlers and Tiaras on TV – the programme follows little girls in the States as they enter pageants.

She says:  “I thought it looked great fun. Aloka loves to watch it too. She can already blow a pageant kiss and if you ask her to do her pageant dance, she can wiggle her hips in time to the music.”

So Claire was thrilled when having submitted a photo to Miss Mini Princess UK whose pageant is open to little girls from birth to 13.

Judging will focus on ‘physical beauty’, the girl wearing ‘the most glamorous WoW outfit’, a ‘talent round’ and an evening dress round. The contest costs £130 to enter with £1000 cash prize and modelling with an agency as some of the prizes.   Aloka was chosen as a finalist and she was invited to a photoshoot.

And now Claire, who made a round trip of 236 miles from her home in Northallerton, W Yorks to the photoshoot in Leicester, is determined to give her daughter the very best chance of winning. 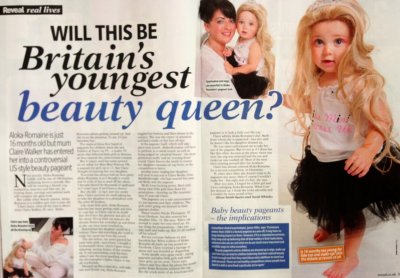 She says: “The day before my friend painted Aloka’s nails.  I had bought bridesmaid’s dress, which I spent hours adapting for Aloka to wear. I sewed dozens of tiny sequins on it. It was painstaking work but when I saw how the dress sparkled under the studio lights I knew it was all worthwhile.”

She adds: “Aloka loved having fake tan, bright lipstick and mascara applied.  At first she found having a wig on strange. But she soon got used to her long blonde wig. She was the centre of attention and had a smile on her face all day.

“And it was a real mum and daughter day out – another way of bonding together.”

Claire has since bought her little girl a curly blonde wig with a fringe. But when she posted the photo of Aloka on her Facebook page, she was shocked by the response.

“Some people were quite strong and vocal – saying such pageants sexualise little girls and make them grow up too soon. They said it was outrageous that I was dressing Aloka up.

“Others said they liked the photo but would prefer Aloka without her wig. But the whole point of an American style pageant is to dress up and look a little over the top.

“Otherwise there would be no point to a pageant.”

Claire admits Aloka’s dad Mark – from whom she is separated – has also said he doesn’t like Aloka wearing make up.

But Claire, who also has two sons Oscar-Rae, 4, and Porter, 3, says: “Mark was upset – he said he didn’t like to see Aloka wearing make up. But it’s not as if I dress her like this very often.  As soon as the photoshoot was over, the tan and make up were washed off. And she never wears a wig usually. Most of the time she’s running around after her brothers.”

Claire, who has already entered Aloka for a second Christmas pageant adds: “If when she’s older she says she doesn’t want to do pageants anymore then I would stop – but right now it’s fun.

“After two sons I longed for a little girl – and love indulging Aloka with her pageant clothes. Yes, it’s hard work pulling all the outfits together – but when I see her dressed up, I think she looks cute. And I feel proud.”

If your son or daughter enjoys taking part in pageants and you would like your story featured in a newspaper, magazine or TV – contact us using the form above, right.