Have you been the victim of a ‘peeping Tom’.  For free advice about how to sell your story contact us using the form to the right of this page… 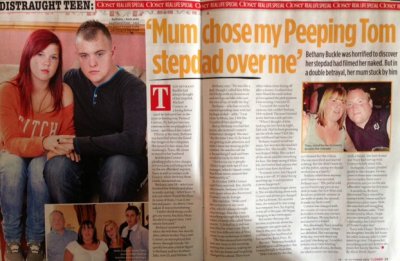 Bethany Buckle was horrified to discover her stepdad had filmed her naked. But in a double betrayal, her mum stuck by him…

Growing up, Bethany Buckle believed she had a perfect childhood. But her world was turned upside down when she discovered video of her naked on a family computer – and found her stepdad, 39, had been spying on her.

Unbeknown to Bethany, 18, when she’d been getting changed the cameras had secretly been taking footage of her.

“I felt sick when I found the filming,” recalls Bethany, who recently sat three A levels, “there was about ten different sets of footage in all. In some of them I was in my bra and pants but in others I was naked. It was so humiliating.

“I had no idea I was being spied on by my stepdad. Before this I thought he was a wonderful man. It was a terrible shock.”

And the shocking revelation has devastated the whole family with Bethany having terrible rows with her mum, Tracy, a secretary.

Says Bethany, from Leeds, “Mum didn’t want me to tell the Police, saying we should work it out as a family. I thought she would stand by me. But instead I ended up having to move out of the family home. I feel so betrayed and upset.

“She always said she would protect her children and that we came first.”

Bethany was four when her parents split and she lost touch with her biological dad. Three years later her mum met Michael Connor.

Bethany says: “Michael was like a dad, although I called him Mike. He’d help with my homework and we’d go on bike rides, just the two of us or walk the dog. Him and mum would take my older brother, Nathan, me, and my little brother on camping holidays.

“And as we got older we’d go out for meals in restaurants and to the cinema as a family.”

Bethany got on particularly well with her mum. She recalls: “Some friends at school would moan about their mums. But I always felt so lucky because mum and I were so close.

“We both loved to watch soaps together. Our favourites were Emmerdale and Eastenders and we’d often sit cuddled up on the sofa together while my stepdad and younger brother went on the computer or played a game on the X Box.”

In October 2009 Michael and Tracy wed at Leeds Registry Office. “It was only a small do with a handful of family and friends,” says Bethany, “but we had a lovely day.”

However, shortly after when Bethany was just 15, family life was about to take a shocking turn.

“Michael had his account on the computer in my room, which I always found strange,” explains Bethany, “and one day I was searching through the history on it when I came across a file that said ‘home movie’. I didn’t remember any home movie footage and out of curiosity clicked on it.”

What she saw horrified her. “There was about five different sets of films of me in my underwear and in some I was naked. I felt sick.”

The terrified schoolgirl immediately clicked off the footage. She says: “I was shaking. I had no idea how it had got there and I felt incredibly embarrassed.”

Over the next few days she tried to tell mum Tracy about what she’d found.

“But I knew it would cause a huge row,” she says, “and mum was always saying if Michael left her, she wouldn’t be able to find anyone else. I hope it was a one-off.” 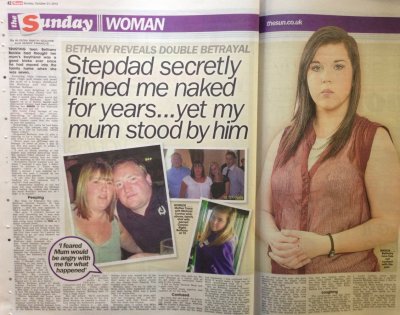 “I didn’t want to be in the same room as him,” she says, “suddenly the thought of him being anywhere near me made my skin crawl.”

Six months later Bethany noticed Connor was using the computer less and hoped it was in the past. But earlier this year she became suspicious about his computer use again. Finally, in March, she confided in boyfriend of five months Ryan Price, 17.

She says: “He told me I should see if they were still on the computer and if they were, then I should report it to the Police,” she says.

She continues: “My older brother Nathan, who’d moved out, was due to visit any time and when he arrived I just broke down.

“Mum was there and kept saying, ‘there’s no need to go to the Police, we can sort this out as a family’. But when I played it to Nathan he called the Police. I was in pieces – it was so embarrassing to watch it in front of Nathan and I knew the Police would be looking at the footage as well.”

Within minutes the Police had arrived. Says Bethany: “They searched the house from top to bottom, taking all the computers. We all had to go to the station and make statements. “ Connor was arrested.

Bethany still had no idea how the films had been made. “But the Police then said he’d used a spy pen on my desk to make the first films and fitted two pinhead cameras in the walls to make the second.”

Connor was charged with voyeurism offences and forbidden by the courts to have any contact with Bethany, he was forced to move out to a hostel.

Says Bethany: “I expected mum to be disgusted and want him out of her life. She had no idea he was taking secret film and had been just as shocked.”

Only Bethany claims her mum did not agree.

“She said Michael he was just ‘checking up’ on me.”

After weeks of rows Bethany decided to move out. She later found out Tracy had met up with Connor to talk about bills.

However, on 6th August 2012 Michael appeared at Leeds Crown Court and pleaded guilty to two charges of voyeurism. He was sentenced to three years community service order, three years probation service, and put on the Sex Offenders Register for five years.

A month on Bethany discovered Tracy was still in contact with Connor.

She adds: “I feel so betrayed by mum. I hope we can eventually repair our relationship but I don’t know if I’ll ever forgive her.”

When asked if she had anything to say, Tracy Connor said: “Bethany is my daughter, but she left home for other reasons, which I don’t want to go into. I’ve given her everything and I can’t believe she treats her family like this.”

Do you have a story to sell to Closer magazine? Contact us via the form to the upper right of this page for free and confidential advice.