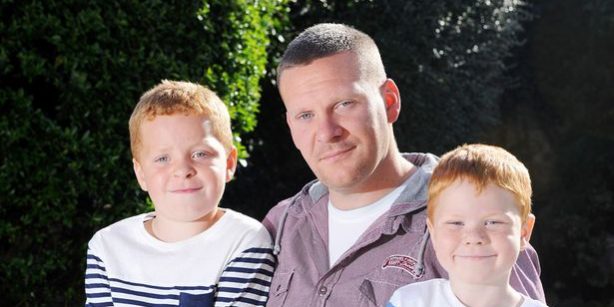 Story in the DAILY MIRROR and TAKE A BREAK …

Sell your story to a newspaper and a magazine? Find out how – contact us using the form to the right.

John Saunders’ world turned upside down when his wife Holly died from cervical cancer. After turning to food for comfort, John 32, tells how he resolved to shed weight to look after his boys… 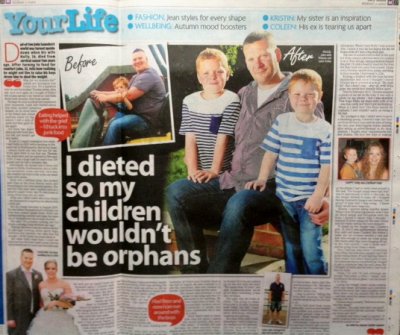 Why did my mummy die?” asked my youngest son Louie, four. It’s a question both he and his brother, Thomas, seven, often ask.

And once again, as I thought of Holly, I felt a lump spring to my throat as I told them about how mummy died from cancer.

Perhaps the kids at school had mentioned their mummies. Louie only started school this term, another milestone missed.

As he stood there in his brand new school uniform ready for big school, I felt a stab of pride and then grief hit me again.

It’s been two years since my wife Holly died, but life just doesn’t get any easier.

At just 23, I wasn’t looking for love when I met Holly in 2003 while working in the same bar in Southampton.

But in my heart, I always knew she was the one for me. Holly gave birth to our first son, Thomas, two years later, and we married in February 2006.

It was a huge bash for more than 250 guests and we had a fantastic day.

Afterwards, we moved into a three-bed house in Hythe, Southampton, and in 2008, our second son, Louie, was born.

Each time she cradled our boys in her arms, my heart burst with pride.

Holly was a brilliant mum. She worked part time at the local beauty salon and everything in our lives seemed perfect.

She and the boys were why I worked hard as a security guard. Every day I’d rush home to scoop those boys into my arms.

Holly and I often talked about our future — we dreamed of completing our family with a little girl.

But on a warm Saturday in August 2009, the day before Thomas’s fourth birthday, our lives were turned upside down.

Holly was upstairs having a shower and when she came out of the bathroom she looked worried.

She said: “It’s probably nothing, but I’ve found a strange lump between my legs.”

That day she went to see the walk-in ­doctor. In amongst fretting about party bags, balloons and whether the cake was big enough, I didn’t think too much about it.

But when Holly came back, I could see from her face the news wasn’t good.

Doctors had referred her for more tests and although we both put on happy faces for Thomas’s party, I couldn’t shift the worry from my mind.

A few days later she had a biopsy. While we waited for the results, we went away to Cornwall. She was so fit ­neither of us could ever imagine this was ­anything to worry about.

But a week later came the bad news.

Holly had cervical cancer and it had already begun to spread. Sitting in the ­hospital room, Holly and I clung to one ­another.

The only good news was that with ­radiation and­ ­chemotherapy, it was ­potentially curable. Despite everything, Holly kept smiling.

Her being so brave made me strong too. All we told the boys was that Mummy wasn’t well. 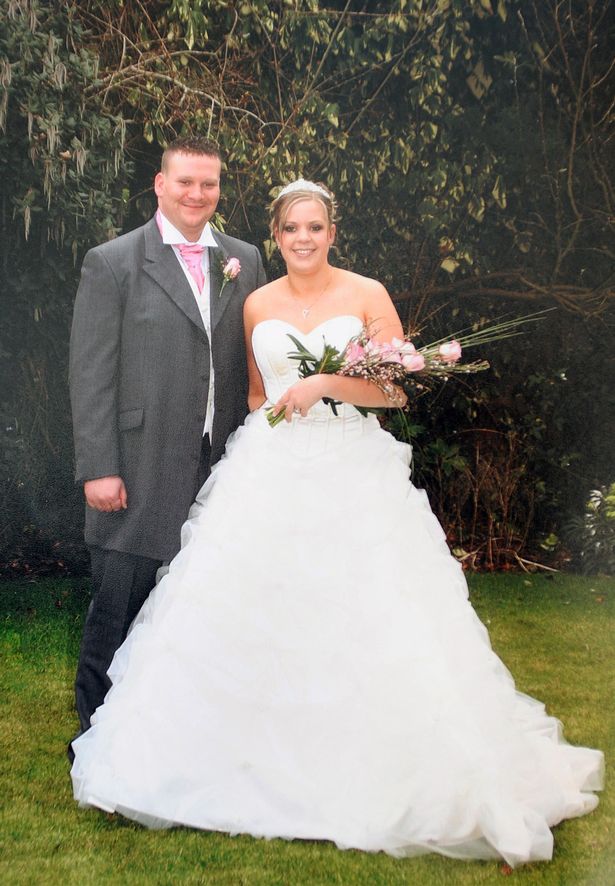 Fortunately, Holly’s chemo didn’t make her lose her hair. By Christmas 2009, we had good news – the cancer had shrunk.

Holly needed ­monitoring but the ­consultant said ­everything was clear. So we got on with our lives.

In June 2010, we went to Egypt. I remember lying in the ­sun, the boys splashing in the pool, thinking how lucky we were.

But a few days into our holiday, Holly’s left leg began to swell and she got backache.

At Holly’s next hospital check at the end of August, we were ushered in to see the consultant, who was flanked by nurses. I just knew it was terrible news.

The cancer had returned. It had spread to her lungs and was too advanced to do ­anything.

We both broke down in tears. The consultant talked about ­treatment to make her more comfortable but it was all a blur.

Holly didn’t want to know how long but when I asked the nurse quietly, she said: “Two years…” I

t sounds odd now but then, two years sounded doable. Maybe by then doctors would find a cure…

Holly came home and on a Saturday night in October 2010 we sat cuddled up on the bed with the boys.

“You know what I’d love?” she said. “A takeaway pizza.” As we all sat there ­munching, it was like old times.

The next day, we woke at 10am. “I’m going to make everyone a proper Sunday roast today,” she said.

I went downstairs to where the boys were watching cartoons, laughing and playing.

But when Holly didn’t come downstairs, I went to find her. As I walked into the ­bedroom, she was lying on the bed, lifeless.

Panic-stricken I dialled 999. She had two years to live at least, didn’t she? She was too young to die. But when the paramedics arrived, they couldn’t revive her.

I was in pieces. Telling the boys their mummy had died was the worst thing I’ve ever had to do.

Holly had died from acute peritonitis – a tumour had blocked her bladder and kidneys.

Two hundred people came to her funeral – there weren’t enough seats in the church.

Afterwards, I tried my hardest to cope but I couldn’t get over the emptiness I felt. Christmas dragged by.

I found comfort in food. Holly and I had always loved our takeaways.

When I met Holly I was around 20st. I knew it was far too heavy for my 6ft frame even if I was a big-built guy.

The two of us had tried to diet in the past but Holly always joked we were too content to do it.

Now, though, eating somehow helped the grief. I’d cook a healthy meal for the boys but later tuck into junk food myself.

Chips, curry, Chinese, sandwiches, pizzas, anything. In four months, I ballooned to 23st.

Kicking a football with the boys became impossible and once I thought I heard ­Thomas say to a friend at school, “My dad’s fat”.

But I didn’t care – after all, with Holly gone, my world had literally fallen apart.

Then in February 2011, Thomas snapped a photo of me sat on the sofa. It was only a photo on my phone – but I was shocked.

That huge bloke sat there with rolls of fat – was that really me? And it got me thinking. What if I died too?

The boys would be orphans. I just couldn’t carry on being a fat dad.

So I pledged to diet. I didn’t want to go to a slimming group, I couldn’t take the time out from the boys to go and the idea of being the only man didn’t appeal either.

Instead, after seeing an advertisement in my local chemist, I bought meal replacements and diet shakes.

The first few days of making up the drinks I had to really steel myself to the task.

The hunger pangs were bad, but I was so determined to stick to the plan.

As the weight started to come off, I stopped feeling ­constantly hungry and instead, I felt proud of how well I was doing – I knew Holly would have been too.

Slowly, I started eating healthy meals. Where once I’d eaten takeaways, now it was all about salads and Bolognese with the boys.

I found it easier than I thought. I ­realised I’d been eating for the sake before and not really tasting the food properly.

To speed up the weight loss, I joined a gym. At first I was embarrassed, knowing how unfit and large I looked.

But within a week, my old trousers needed a belt and that was enough to make me keep going.

Two weeks later, they were hanging off me. In the first month, I lost a stone and I started going three times a week.

Still, I had bad days when I craved food. Days when the kids were naughty and I felt guilty telling them off and sending them to their rooms.

And when they’d gone to bed, the loneliness was so overwhelming, I longed to eat to somehow take the pain away. But I thought of Holly and the boys. I had to do this for them.

Today, I’ve lost 7st and although my weight fluctuates a little, I weigh 16st. Standing at the school gates, I can feel proud to be there.

Losing the weight hasn’t made missing Holly any easier. Birthdays and Christmas are still the worst. But I feel a hundred times fitter.

Now I can run around with the boys – and they won’t be teased at school about having a fat dad.

Thomas asked recently: “Will we ever have another mum?”

I replied, “You only ever have one mum”. Then he pointed to the sky and said: “Mum’s up there, isn’t she?”

I nodded and then I said to myself, “If you’re looking down on us Holly, I hope you would be proud of me.”

If you have an emotional story to sell to a newspaper or magazine, contact us at using the form to the right of this page.