I feared no-one would believe me. Story in BELLA and on ITV THIS MORNING…

Allegations against the late Jimmy Savile shocked the nation. Here Deborah Cogger, 52, claims that she was one of his victims… 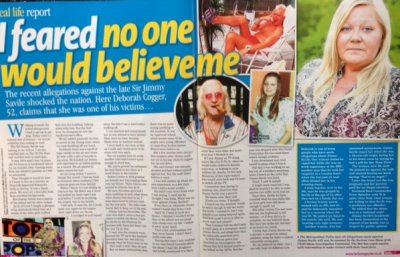 “It was 1974, I was aged 14 and I was feeling excited.  A real-life celebrity, Jimmy Savile, was coming to visit our school. We saw him on the TV – he was on Top of the Pops. And he was going to bring us cigarettes, sweets and records.

I’d only been at the residential school for about six months. Life was unhappy at home. I was adopted but I kept falling out with my parents and was always running away.

In the end it was thought to be the best thing if I went to live at Duncroft Approved School for Girls in Surrey.  It was a boarding school and a bleak sad place. We were all vulnerable kids from troubled backgrounds.

But Jimmy Savile was a patron of the school and his visits were treated as if he were royalty.

I remember the first time he visited waiting to catch a glimpse of him as he swept into the school courtyard.

A couple of girls, mesmerised by this famous TV star, dragged him by his arms into the building – and for the first hour he disappeared into the headmistress’s study.

Meanwhile, we waited for Jimmy to appear in the dining room where we were finishing off our lunch of beans on toast.

We smelt his cigar first and then there he was. He had a pile of records in his arms. It was our treat to dance to them in the dining hall.

My friend Caroline and I were changing the record when he came and sat next to me. We’d both heard rumours Jimmy was a bit of a ‘letch’ but as our headmistress said, ‘He loves you girls, what he’s like, well, it’s Jimmy’s way.’ So I didn’t worry.

But then I felt a grab from behind and before I knew it Jimmy Savile had pulled me back and I landed on his lap.

My head was pulled right back but before I could do anything, shockingly I then felt his tongue in my mouth. Immediately I felt sick. It tasted vile of cigars and went right down my throat.

After what seemed an eternity but what probably only minutes, if that, I managed to pull myself away.

I was so shocked and embarrassed. His lunge was in front of everyone and I felt disgusted. 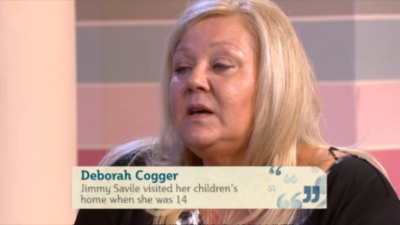 I moved away as fast as I could.  But on a later visit I wasn’t quick enough to avoid him.

“My you’ve grown!” he exclaimed, his eyes fixed on my chest. Then before I knew it he’d grabbed both of my boobs and was cupping them over my school blouse.

I was stunned. It was as if because he was a popular celebrity and so famous that he had the right to do whatever he wanted – even if it meant groping us.

And I was far from alone. I soon discovered he always went for the new girls – the older ones learnt fast to keep out of his way.

Bum squeezing, touching girls up their skirts – it seems as if his visits were just a way of having a grope of girls who couldn’t complain.

Jimmy had his favourites – the ones he idolised and who didn’t cause a fuss. The girls who didn’t complain got taken to watch his shows. I’ve no doubt he did whatever he wanted with them.

Once one girl did complain. Jimmy made her sit on his lap while he jiggled her up and down.  Afterwards she was sobbing, saying Jimmy was sexually aroused and had rubbed himself against her.

But the staff didn’t believe a word. Instead she was punished for saying something and put in a padded cell in solitary confinement until she withdrew her wicked allegations.

However, my own experience played on my mind and a few days after and still shaking I told my social worker. Terrified I would be punished as my friend was, I begged him not to tell the school But he didn’t even write down what I said. What was my word against Jimmy Savile’s?

From then on, I just tried to make sure I wasn’t around when Jimmy visited.

Aged 16 I left the school and went to work in a factory.

I decided I wouldn’t let being at the school and my horrific brush with Jimmy Savile ruin my life.

I locked it away in a place in my head and just never went there. But although I didn’t think what happened affected me, I now realise it did. And in fact even today I don’t feel I can trust anyone, especially men.

Aged 18 I married a man I met through my factory work. As I walked up the aisle I knew I didn’t love him but I was desperate to escape home and my whole background. Needless to say it didn’t work and within four months we’d split up.

In 1979 I married another man, whom I met while working at a different factory. But, although we had my eldest daughter that marriage only lasted three years.

In 1983 I had changed jobs and was working at a petrol garage. There I met  a lorry driver and we had my youngest daughter. But when she was six months old, we split.

It was as if the same pattern kept repeating itself. Any problem that came about in our relationship and I was off.

Since then I’ve had one other serious relationship – but after six years that finished too.

During all this time I barely told a soul about what happened with Jimmy Savile. I confided in one close friend, Lorraine – and briefly mentioned it to my daughters when they were older – but otherwise, I blocked it from my mind.

If I saw him on TV, I’d feel sick – memories of that cigar-sodden kiss would come back and I’d have to switch the TV off. I remember once saying to someone who liked him that Jimmy Savile was a pervert.

Yet, deep down I believed some day all the allegations would come tumbling out.  I only had to think of all the girls just like me to know there must be tens – even hundreds of victims.

And although I put it out of my mind, it was always there lurking.

Then a few months ago Lorraine told me she’d spotted a small piece in a national newspaper about Jimmy Savile and allegations that he indecently assaulted girls.

So I decided to take courage in both hands. And I rang the national paper to tell them about it.

My story didn’t come out for weeks – but then news of a documentary surfaced. In it other women were saying they too were assaulted as young girls.

Incredibly I also found out in 2007 Surrey Police launched an investigation that Jimmy had abused pupils at my school in the 1970s. But the case was dropped after the Crown Prosecution Service ruled there wasn’t enough evidence.

This time though other women were coming forward to say the same thing.  And when my story was finally printed, I felt pleased that at last I could get it out there.

It was as if finally, after all these years, I got some closure.  Although Jimmy Savile was dead, at last people knew what he was really like.

Since then I’ve met up with two more victims. They were all like me – too frightened to tell anyone and if they did try to complain, no-one believed them.

But the truth is Jimmy Savile was a pervert, a dangerous sexual predator, using his fame to exploit vulnerable young girls. No-one believed us then. I can only hope it’s different now.”

Do you have an abuse story to tell to a magazine? Contact us using the form to the right of this page…

My unfaithful husband had a baby with his mistress
September 15, 2016