Singer Michelle Heaton has told of her distress at discovering she has the BRCA2 gene and her heart-wrenching decision to undergo a double mastectomy.

Here, Danielle Shorten tells why she made the same choice… 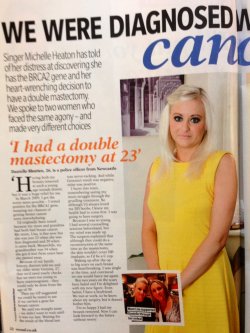 Danielle, 26, works as a Police officer and lives in Newcastle. She says: “Having both my breasts removed at such a young age sounds drastic – but it was a huge relief.

In March 2009 I got the worse news possible – I tested positive for the BRCA1 gene. It was absolutely devastating and I broke down in tears because it meant I had an 85% chance of getting the disease.

I’d originally got tested because both my mum and grandmum had breast cancer. My mum Lisa, is fine now but she was just 23 when she was first diagnosed and aged 29 when it came back. Meanwhile, my grandmother was 54 when she got it and just 57 when she died from breast cancer.

Seeing both of them go through cancer treatment was harrowing. I remember visiting mum in hospital when she’d lost all her hair and didn’t even have the energy to give me a kiss.

Although I would have yearly checks, I was too young to undergo scans for breast cancer. That could only be done from the age of 30 and by then it might be too late…

Then my GP suggested my older sister, Gemma who’s 27, and I could be tested to see if we carried a gene for breast cancer.

Waiting for the result of a blood test was nerve-wracking. Fortunately Gemma doesn’t have the gene – but I do.

It was a terrible worry and for me the only course of action was to have both my breasts removed.

That was devastating because I’d always loved my DD breasts. And worse was to come when the surgeon explained although they could do a reconstruction at the same time as the mastectomy, I’d end up smaller.  The skin wouldn’t cover DD implants so I’d be a C cup.

On the day of the op I was sick with nerves and when I woke up I felt so upset as I had big scars on both breasts. I was single and thought who will love me like this?

But two years on they’ve faded and now I’m really happy with my new figure.  Even better, I now have a partner, Adam, 31, also a police officer. We met at work and he knew I’d had this op but it never bothered him.

Today I’m just happy I went ahead as I can look forward to the future without worry.”

Have you been affected by a genetic problem within your family? If you have a story to sell, then contact us using the form to the right of this page.