Cancer battle story to sell? Simply fill in the form to the right of this page. 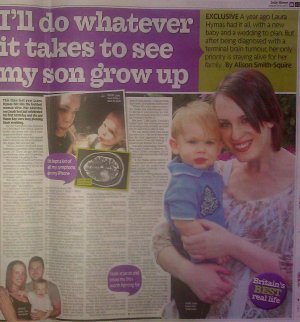 This time last year Laura Hymas felt like the luckiest woman alive. Her adorable son Jacob had just celebrated his first birthday and she and fiance Ben were busy ­planning their wedding.

But her happiness was shattered on Christmas Eve when doctors broke the news she has a rare, ­inoperable brain tumour.

And now she faces a race against time to travel to the US for treatment she hopes will save her life.

“When doctors dropped their bombshell I just broke down,” recalls Laura, 24. “Even though they told me there’s no cure, and it’s growing, I can’t accept I’m going to die.

“The thought of Jacob not having me here is heartbreaking. I will do anything to see him grow up and am determined to beat this.”

Laura’s nightmare began shortly after discovering she was ­pregnant in January 2009.

“Ben and I were delighted to be having a baby but my pregnancy wasn’t easy,” she explains.

“I suffered terrible morning ­sickness, and it was so severe that I had to be admitted to hospital. While that stopped at 16 weeks, from then on I felt exhausted.”

Even when Jacob was born in September 2009, a healthy 7lb 14oz, Laura didn’t feel much better.

“I adored being a mum and Jacob was gorgeous but even though he was well behaved, I was shattered. Ben used to have to do the night feeds, and I would feel anxious for no real reason.”

At the same time, she noticed her balance wasn’t good either. Between that and other health problems, Laura visited her GP dozens of times.

She says: “At first my doctor thought it was the baby blues but when, months after Jacob was born, I still felt tired, he diagnosed ­postnatal depression. I even came home with anti-depressants.

“But I knew it wasn’t depression because I felt so happy being a mum. I didn’t even take the pills.”

Then, in October last year, while the family, from Rochester, Kent, were in Lanzarote, Laura ­developed a weakness in her right arm.

“At first I thought I might have slept awkwardly or pulled a muscle,” she recalls. “Some days it was there, some days it wasn’t. Other times I felt tingling in my fingers.

“It was frustrating as I kept ­wondering if I was imagining it.”

But the breakthrough diagnosis came after another visit to her GP’s in November last year.

“I’d had a cold I couldn’t shake off and went to see if I needed ­antibiotics. This time I saw a different doctor and he could see from my notes I’d sometimes been at the surgery every week.

“I said I’d kept a list of my ­symptoms on my iPhone. I handed it to him and he looked ­concerned. I’d been visiting the surgery with a different symptom every time.

“When he saw them together, warning bells rang. Although he didn’t say he ­suspected a brain ­tumour, he sent me for tests.”

A few days later, she was called back for the results.

“I’d had a brain scan but I’d also had blood tests and thought I was going to get those results. 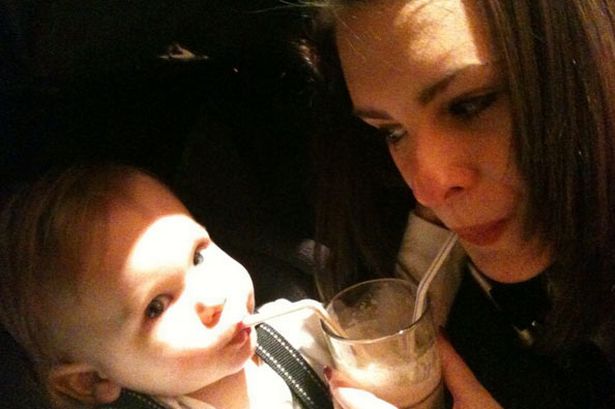 “It was ­Christmas Eve and no one ­expected anything serious so I just popped along with Jacob. I was totally ­unprepared for what the doctor said. They had found something on the scan. It was a huge ­tumour.”

Laura immediately rang her mum, Vanessa, who hurried to the hospital to comfort her daughter.

“I was in pieces,” recalls Laura. “Although it was a strange relief to know I hadn’t imagined all the symptoms, I never expected ­something so terrible.”

The bad news was the tumour, known as an oligodendroglioma, was inoperable – it was deep in the brain and removing it would be too dangerous, so all doctors could do was monitor it.

However, they also explained Laura could have had it for 20 years. Tests showed it was a low-grade, slow-growing tumour.

“That was a huge relief,” Laura says. “We did lots of research and were reassured when we read stories saying people did live normal lives with this sort of ­tumour.”

But by February, Laura’s right arm was ­virtually ­paralysed. She had also ­developed ­epilepsy and was having seizures every day.

When the next batch of test ­results arrived in April, everyone was in for a further shock.

“Ben and my parents came with me for the results of a scan and biopsy. We were left reeling when doctors said the tumour had grown rapidly,” she says.

“Now it had turned into the worst form of brain cancer – a fast-growing, high-grade glioblastoma ­multiforme.

“Worse still, while they could give me chemo and radiotherapy to try to shrink it and prolong my life, there was nothing more they could do. I couldn’t believe it.”

Ben says: “Like Laura, I couldn’t accept there was nothing we could do. Looking on the internet, we could see we didn’t have time to lose.

“No one knows how long Laura has left to live – but we do know she has the most aggressive form of brain cancer. If we did nothing, it could be six months to a year.”

And after painstaking research, Ben found a clinic in Houston, US, which offers a treatment that is still under trial and the NHS will not fund.

In the States, critics believe it is expensive, with no proven results. But the couple have read stories claiming it has worked for some.

Laura says: “We’ve already sent the clinic my notes. The treatment is based on the clinic’s 25 years of research showing people with the cancer I have are lacking a ­tumour suppressor.

“In people without ­cancer this substance kills ­growing cancers. The clinic doctor ­believes replacing it with a drug will trigger the body’s immune system to rid itself of the tumour.”

The family has launched the Hope For Laura Fund to raise the €86,000 they need for the first 12 months of therapy.

IT consultant Ben says: “People were so keen to help that in a few hours the website took 31,000 hits. A number of ­celebrities have been in contact, too.”

Laura is having therapy to help shrink the tumour. She then hopes to have the new ­treatment in the US in October.

Ben says: “It’s hard to see Laura suffer. We know in the next few weeks she is going to lose her hair.

“Some people say we should accept Laura’s condition is terminal. But if this does save her life, we can carry on raising money for others in a similar situation.”

Laura adds: “There are times when I feel like giving up. But I only have to look at Ben and Jacob to know my life’s worth fighting for. That’s why I’m determined to give this treatment my best shot.”

Sell your battle for survival story? Fill in the form to the right of this page to sell your story.