Story in the Sunday Mirror and Bella magazine … 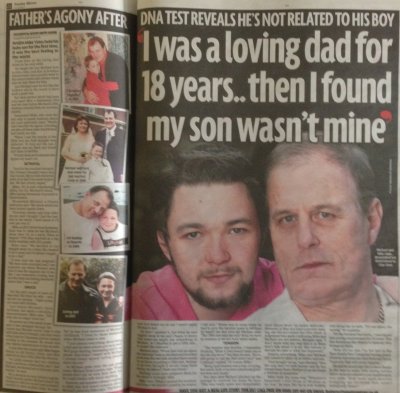 Mike Yates’ story about how after 18 years he discovered his son wasn’t his after all appeared in the Sunday Mirror newspaper.

Our bombshell: Dad and son discover two days before son’s 18th they are not related

Mike and his son Michael have always had a great relationship. Although Mike split with his ex when Michael was young, he was a hands-on dad. Even when Mike remarried, Michael, his only child, was round to visit regularly. He was best man when Mike remarried and went on holidays with them. Mike always paid for Michael’s maintenance and they both felt lucky to have such a great relationship.

But now both of their worlds are in tatters – after a bombshell DNA test revealed they are not related at all.

The pair decided to have the test done after hearing rumours that Michael’s mum had confessed to a friend Mike wasn’t his dad.

Mike, 55, a lorry driver, says: “We both expected it would come back that I was Michael’s dad. After all, people have always said how much alike we both are. So when the results came back that we couldn’t possibly be related it was a bombshell. We are both absolutely devastated. 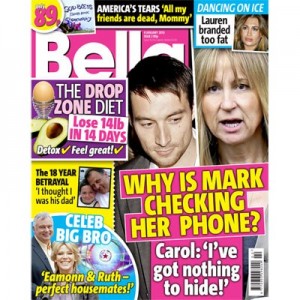 On the cover of Bella mag…

“Michael was my only child so to find out after all this time I’m not really a dad at all has been heart wrenching. Words can’t describe the pain of it. Meanwhile, Michael’s world has been turned upside down. He doesn’t know who his dad is.”

The pair have tried to ask Michael’s mum but she refuses to talk to either of them.

Mike, who also feels he was duped into paying thousands of pounds in maintenance for 18 years, is now married to Linda, who already had children when they met. He says: “As I also had Michael we both decided not to have more children. If I’d known that Michael wasn’t really my son we would have both tried for a child together. Now it’s too late.”

Meanwhile, Michael says: “Finding out my dad is not really my dad has rocked my world. It has been a devastating discovery. But despite this we can’t erase so many years of happy memories.”

Their story has since appeared on the front cover and over two pages of BELLA magazine.

Do you have a DNA story to sell? Maybe you have also found out you are not related to a relative after all? Or maybe you are seeking to find out who your real parent is? If you would like some advice on how to get your story into a newspaper or magazine contact us using the submission form to the right of this page.

Category: Recent Stories 2012, Sell my story to the Mirror, Stories sold to newspapersBy Alison Smith-SquireDecember 17, 2012
Tags: Health storiesRelationship stories
Share this post
Share with FacebookShare with TwitterShare with PinterestShare with LinkedInShare with WhatsApp