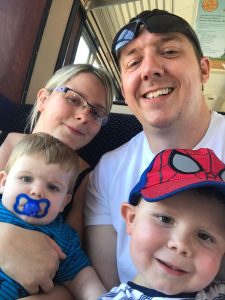 Lucy with her gorgeous family

Lucy was shocked to find that doctors had left a surgical instrument inside her, during an appendicitis operation three years ago. The metal hook could have stopped her having a second child, but miraculously she gave birth to a boy

This is the baby boy doctors told his mum Lucy Elliott thought she would never have.

Charlie, one, was born after his mum underwent surgery to remove a metal hook left inside her by bungling surgeons during a previous appendix op. The instrument left Lucy, 26, with such scarred insides doctors said she might not be able to carry a baby full term.

Incredibly, despite getting terrible backache within weeks of the operation, she managed to give birth to her first son Adam without any issue.

But as he got older, she found it harder to play with him and was often in severe pain.

Tests finally revealed a metal hook had fallen off inside her during the appendix op.

The problem was it was deeply embedded and there was a high chance her uterus, which it was very near, would be damaged in the process.

Lucy and her husband desperately wanted another baby as a brother for their eldest son.

As she was also in so much pain, she decided to go ahead with the delicate surgery. The good news was immediately after the op, Lucy’s back pain had gone. For the first time in years she could walk and run normally. 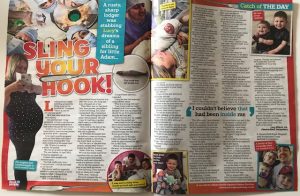 However, the operation had not been easy. Her surgeon said unfortunately it had scarred her insides and he thought it was unlikely she would conceive.

So she was delighted when two years later she gave birth to a second baby boy Charlie. He is the sibling for little Charlie she never thought she’d have!

The thrill of seeing your story in print is something many interviewees adore. Lucy said: “Been to Tesco’s and got a copy of real people the story is in and it’s great great pics too…”

Lucy’s story has already been placed with another publication – and she hopes for another lovely cutting!

Do you have a story to sell to the media? Contact me for free advice about selling a story >>>

Category: sell my story to Real People, Stories sold in 2018, Stories sold to a magazineBy Alison Smith-SquireOctober 25, 2018
Tags: FertilityInfertility and IVF stories
Share this post
Share with FacebookShare with TwitterShare with PinterestShare with LinkedInShare with WhatsApp